The Israel Nature and Parks Authority on Sunday launched a website where volunteers interested in helping to clean up a massive tar spill can register, promising that those who turn up will be instructed on how to handle the tar safely.

This follows the hospitalization Saturday of several people after they apparently inhaled toxic fumes while handling the tar.

The cause of the huge contamination of beaches from Rosh Hanikra in the north to Ashkelon in the south is still being investigated.

On Saturday, INPA chief Shaul Goldstein described it as “the worst environmental disaster in a decade.”

Tar pieces from an oil spill stuck on rocks in the Mediterranean sea as it reached Gador nature reserve near Hadera, Israel, Feb. 20, 2021 (AP Photo/Ariel Schalit)

Several thousand people came to beaches over the weekend to help with the cleanup of the spill, which is suspected of causing widespread wildlife deaths, including that of a 17-meter (55-foot) fin whale that washed up on a beach in southern Israel on Thursday. 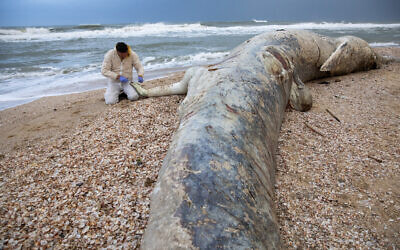 But following the toxic fume inhalation, the INPA urged people to stay away.

On Sunday, the organization said in a statement that in view of the “complex and strenuous” cleanup efforts that will be needed over a long period of time and the “many heartwarming requests by the general public” to volunteer to help, the organization and the other bodies with which it was working had set up a site for registration as well as several centers for information and volunteering.

People who want to help should register on the dedicated site (in Hebrew) after which they will receive a message directing them to a particular beach at a particular hour.

Information centers will operate at the beaches of Achziv, Tel Dor, Habonim, Shikmona and Beit Yannai in the north, Palmachim in central Israel and Ashkelon.

All volunteers will be instructed on how to remove the tar while protecting their health.

The Ministry of Environmental Protection said Saturday that on an observation flight, tar spills were found moving in the direction of several beaches in Haifa. The affected areas were 200 to 500 meters (656 to 1,640 feet) from the shore, and the ministry said it was considering appropriate treatment.

The “tar pollution,” said the ministry, impacts about 160 kilometers (100 miles) of the coastal strip, from Rosh Hanikra in Israel’s far north to Ashkelon.