Prime Minister Benjamin Netanyahu on Tuesday said he sees no option of forming a government backed by the Islamist Ra’am, after the Arab Israeli party voted against his bloc Monday in a key Knesset vote.

Rather, Netanyahu said the only options are Gideon Sa’ar reneging on his New Hope party’s central campaign promise not to join forces with the Likud leader, or holding special, one-off direct elections for prime minister, an idea floated — and criticized by many — in recent days.

“We don’t need Ra’am,” the prime minister said at a press conference. “We need direct elections so that we can form a government.”

“I want to get to the point where we are forming a right-wing government, and the way to do that without relying on one faction or another is direct elections,” Netanyahu said.

The direct election proposal, however, appears doomed, after officials in the Ra’am party on Tuesday said it’s unlikely to support the idea.

Amid the ongoing deadlock following the election, a Likud proposal regarding party representation on the key transitional Arrangements Committee was voted down by the Knesset Monday when Ra’am voted with the opposition. The Arab Israeli party then supported a counterproposal from the opposition that was passed, giving the anti-Netanyahu bloc a majority on the committee.

Ra’am’s cooperation with the anti-Netanyahu parties came after it had been courting both Knesset blocs during negotiations to form a government. Netanyahu was hoping to build a right-wing government based on outside support from Ra’am, but the idea has been rejected outright by the far-right Religious Zionism party, which has repeatedly said it will not stay in a coalition that relies on cooperation with Arab Israeli parties.

To form a majority in the Knesset, Netanyahu would need to have Religious Zionism and the right-wing Yamina party on board, as well as outside support from Ra’am. In the wake of Ra’am voting to stop the Likud proposal, Religious Zionism lawmakers remarked that it further strengthened their view that a government cannot in any way be dependent on Ra’am, even for external support.

Facing Netanyahu is the Lapid-led “change bloc” of parties from the right, left, and center. That bloc will also be unable to form a government without Yamina and Ra’am. Neither party has committed to either side.

With his chances of forming a coalition appearing to fade away, Netanyahu is now backing an effort — which would block Yesh Atid chairman Yair Lapid’s path to the premiership and prevent a fifth consecutive Knesset election — to reintroduce direct elections for prime minister.

“There is a solution to the deadlock and it is a direct election for the prime minister to let the public decide who will lead the country. It is currently impossible to form a right-wing government because of personal matters,” Netanyahu said on Tuesday.

On Monday, the ultra-Orthodox Shas party submitted a bill to hold a special election next month to pick the prime minister as a way of resolving a political deadlock that has seen four inconclusive elections in two years, the last of which was held in March.

Should the Shas bill pass into law it would prevent Lapid from having a chance to form a government even if Netanyahu fails to do so, and would also end Yamina chair Naftali Bennett’s bid to be prime minister as part of a rotation deal. In addition, it would block Blue and White leader Benny Gantz from taking over as prime minister in November, as is the current arrangement under the unity government agreement with Likud, if no coalition is formed by then.

Lapid immediately dismissed Netanyahu’s call for a direct election just for prime minister, writing on Twitter: “Netanyahu, the State of Israel doesn’t need another election. This isn’t a direct election, it is a bypass aimed at buying time at the public’s expense.”

“It is time to form an Israeli unity government. It is possible,” Lapid added, referring to a potential government that doesn’t include Likud, which would face significant hurdles since it would have to include both right-wing and Arab parties, or both ultra-Orthodox and secularist parties. 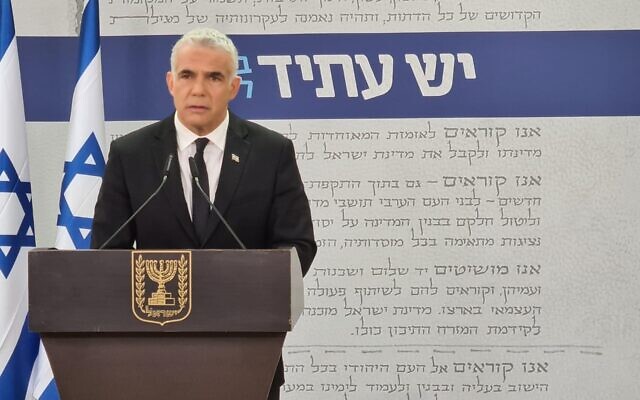 While a direct election for prime minister would automatically determine who would form the government, it would not change the coalition arithmetic, and the winner would still need to form a coalition from the same parties elected in March.

Netanyahu nonetheless called on Bennett to declare his support for the direct election initiative “today” in order to “allow a right-wing government to be formed.”

In early December 2019, following the second inconclusive vote of the year, Netanyahu said that he would support a proposal for direct elections for prime minister in a bid aimed at averting a third round of full-blown national elections.

Yamina, at the time, backed the proposal, which ultimately did not attract sufficient support. The Knesset dissolved on December 11, 2019, and new elections were held in March 2020. 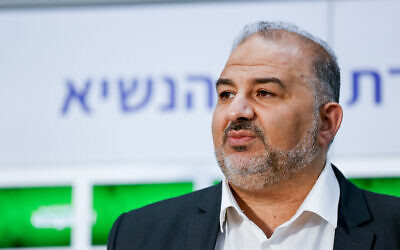 Mansour Abbas, head of the Ra’am party, gives a press statement after meeting with Israeli President Reuven Rivlin at the President’s Residence in Jerusalem, on April 5, 2021. (Yonatan Sindel/Flash90)

While Netanyahu said Tuesday that with Bennett’s support the bill would pass, the parties supporting him plus Yamina only add up to 59 seats, and he would likely still need the support of Ra’am in a Knesset vote.

While Ra’am chair Mansour Abbas said Monday that he would consider supporting a bill for a special election for prime minister, Channel 12 news on Tuesday quoted party sources as saying they were unlikely to back the move.

Following the vote for the Arrangements Committee Monday, Abbas said he was driven away from Likud due to attacks from its far-right allies in the Religious Zionism party, which accuses Ra’am’s lawmakers of being anti-Zionist and of backing Palestinian terrorism.

Asked Tuesday why he has not criticized his partners in Religious Zionism for their attacks on Ra’am, Netanyahu said: “I do not interfere with what they said… I am against incitement and in favor of the Arab public.”

If Netanyahu fails to form a government by May 4, Rivlin will need to either task a second candidate with doing so or send the mandate back to the Knesset to directly choose a lawmaker to do the job.

The opposition’s Lapid also faces significant challenges in forming a majority as the anti-Netanyahu bloc includes parties that are diametrically opposed in their world views on major issues.

Should neither bloc establish a government, Israel would head to what would be its fifth elections within three years.