A top ally of Prime Minister Benjamin Netanyahu on Saturday branded a Yamina lawmaker “racist and homophobic,” as the right-wing party eats into support for the premier’s Likud party in opinion polls.

In an interview with Channel 12 news, Transportation Minister Miri Regev (Likud) was pressed about her nomination of several Likud members to government positions, asserting they were qualified for the posts. She was then asked about criticism of her tenure by Yamina MK Bezalel Smotrich, who preceded her as transportation minister.

“[Smotrich] together [Naftali] Bennett are winking to the left and center,” she said, referring to the head of Yamina and accusing them of seeking centrist and left-wing backers.

Regev claimed Bennett was “trying to hide that Smotrich is a racist and homophobic,” before lashing out at her predecessor over his tenure at the ministry.

“He’s strong in the polls, but weak at the ballot box,” Regev said.

Bezalel Smotrich arrives at a voting station in the West Bank settlement of Kedumim on March 2, 2020. (Sraya Diamant/Flash90)

Smotrich, who heads the far-right National Union sub-faction in Yamina, has a history of controversial statements. He’s called for segregated maternity wards for Jews and Arabs; said gays control the Israeli media and the public agenda; and boasted about being a “proud homophobe,” saying gay people are welcome to be “abnormal” in their own homes, but shouldn’t “make demands of the state.”

“I don’t think there’s anyone who is surprised that low discourse like this is coming from Miri Regev,” Smotrich tweeted in response. “Still, I’d be very happy to help her familiarize herself with the Transportation Ministry so she’ll do as little damage as possible.”

“Regev has turned the Transportation Ministry into an industry for giving jobs to cronies,” the party said. “Instead of worrying about reducing the number of traffic jams, Miri Regev is exploiting the ministry for hollow public relations, for satisfying political demands.”

Regev has been accused of giving Likud officials jobs in the ministry to boost her showing in the party’s future primaries.

The bickering came days after Netanyahu took his own shot at Bennett amid Yamina’s surge in the polls, questioning his rival’s right-wing credentials. Bennett is to the right of Netanyahu on many political issues.

Since entering the opposition, Bennett has regularly issued strong criticism of Netanyahu’s handling of the coronavirus pandemic, and has seemingly emerged as the leading contender to challenge him in a future election. 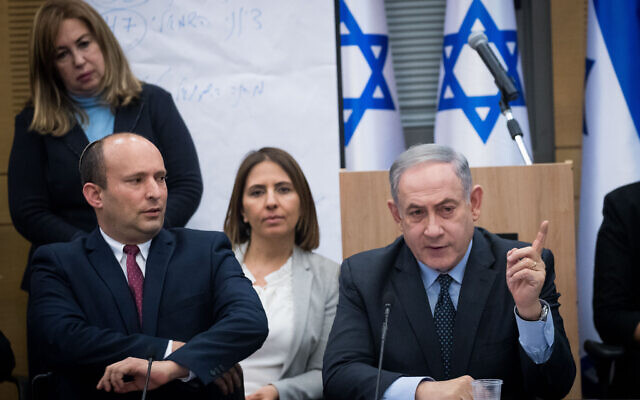 Prime Minister Benjamin Netanyahu speaks with then-defense minister and Yamina leader Naftali Bennett during a meeting with the heads of right-wing parties in the Knesset on March 4, 2020. (Yonatan Sindel/Flash90)

Despite their enmity, Bennett has consistently recommended Netanyahu as prime minister in the wake of all elections in which he’s taken part, saying there is no real alternative to his leadership. This appears to have changed recently, with Yamina saying Bennett will be a candidate for the premiership in the next national election.

A new election has become increasingly likely amid ongoing infighting between Likud and Blue and White in their power-sharing coalition, with tensions expected to come to a head in the coming weeks over the long-absent state budget.