Prime Minister Benjamin Netanyahu on Thursday launched an attack on the Yamina party and its leader Naftali Bennett, after parties of the so-called “change bloc” agreed to form a coalition that would boot him from power.

Facing the prospect of losing power after 12 consecutive years, Netanyahu held an “emergency meeting” with his right-wing religious allies, to brainstorm how to disrupt the potential unity government before it is voted into office next week or the week after.

He also called on right-wing lawmakers in the emerging coalition to torpedo the potential government.

“All Knesset members who were elected with the votes of the right must oppose this dangerous left-wing government,” he tweeted.

In a social media post, the prime minister accused Bennett of having “sold out” the southern Negev region to the Ra’am party — an apparent reference to the prospective coalition reportedly agreeing to approve a small number of Bedouin communities in the Negev.

Netanyahu presented a chart he claimed compared his own concessions to Ra’am with those of Lapid and Bennett. The post was a change of tack for Likud, which until now had claimed repeatedly and consistently that it never negotiated with Ra’am.

Yamina issued its own post comparing Yamina and Likud’s offers, with the parties contesting many of the details.

The prime minister also said the emerging coalition would hand NIS 52.5 billion in “state funding to the Arab sector,” whereas he had only agreed to NIS 15 billion. Yamina made no claims on this front.

Netanyahu also said that, unlike Bennett and Lapid, he had never agreed to let Ra’am be part of a coalition or to lean on it for approval of his government, but only sought its support for one-off legislation for direct election of a prime minister. This account has been disputed by multiple political officials who have said that Netanyahu did try to win Ra’am’s outside backing for his coalition in the Knesset.

Ra’am was key to the coalition agreements negotiated by MK Yair Lapid, leader of the Yeshi Atid party, who announced Wednesday night that he had succeeded in bringing together enough parties to form a government.

Netanyahu had tried to build a coalition that would have relied on outside support from Ra’am, and reportedly attempted to woo the party with promises of boosting support for the Arab Israeli community.

After he failed to achieve a majority government in the allotted time, the mandate was given to Lapid, who told President Reuven Rivlin on Wednesday he had succeeded by managing to bring together both Ra’am and Yamina.

The prime minister also retweeted a video Thursday posted by his media advisor Topaz Luk, which included a clip from earlier this year of Bennett slamming Netanyahu for even considering building a coalition that relied on Ra’am, which he accused as being a “sister party” to the Hamas terror group. Bennett at the time also said Netanyahu should be “ashamed” of embracing Abbas, who in the past made prison visits to Palestinian terrorists convicted of killing Israelis. 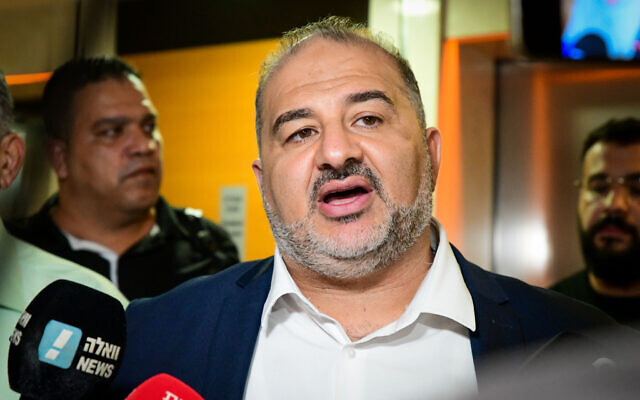 Mansour Abbas, head of the Ra’am party seen after signing the coalition agreement, at the Maccabiah village in Ramat Gan on June 2, 2021. (Avshalom Sassoni/Flash90)

Yamina’s chart claimed Netanyahu had himself offered Ra’am even more sweeping concessions to entice the Islamist party to join his coalition, such as agreeing to dismantle the Yoav unit of the Israel Police, a special SWAT-style unit that helps deal with criminal organizations in the Bedouin towns of the Negev.

It also claimed that Netanyahu had agreed to end Jewish National Fund tree planting in the south, a country-wide program seen as a triumph of Zionism.

Likud did not immediately respond to those claims.

The Likud-Ra’am talks were torpedoed by Religious Zionism party leader Betzalel Smotrich, who campaigned vociferously against a right-wing coalition that included a non-Zionist party. 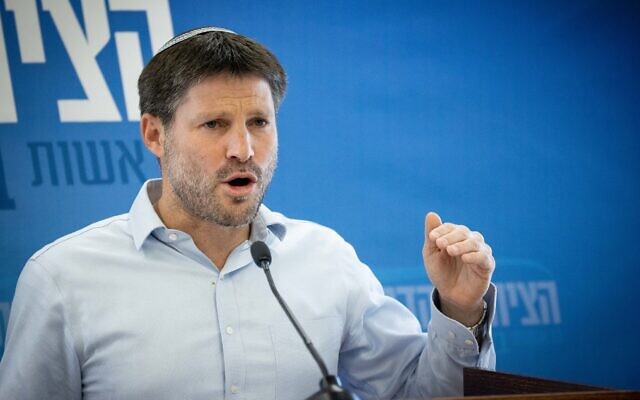 Religious Zionism leader Bezalel Smotrich leads a faction meeting at the Knesset on May 3, 2021. (Yonatan Sindel/Flash90)

According to Hebrew media reports, the coalition deal between Ra’am and Yesh Atid includes a deputy ministerial post for Ra’am in the Prime Minister’s Office.

Ra’am leadership, its Shura Council, has yet to decide if the party will activate that article in the agreement and appoint such a deputy minister, and it’s not yet clear what the post’s powers or areas of responsibility would be, reports said.

But if Ra’am ends up with a deputy minister in the PMO, that would be a first for the Islamist party.

As the coalition-building enters the final stages, the Shin Bet’s unit that protects the top officials of the state, Unit 730, placed a security detail around Bennett, the coalition-to-be’s new prime minister, the security service said in a statement.

Sources familiar with the decision said the Shin Bet decided to begin protecting Bennett at this early stage over fears that anger at him in some parts of the political right could lead to attempts on his life. Yamina MKs, and Bennett and his No. 2 Ayelet Shaked in particular, have been targeted with abuse from right-wing activists over the party’s inclusion in the coalition.

Though Lapid informed the president he has a coalition, the agreements between the parties have not yet been finalized, and there remain disputes to resolve. Lapid has until the coalition is approved by the Knesset to solve the last disagreements.

In the meantime, Netanyahu and his ally religious parties are continuing to pressure lawmakers in Lapid’s prospective coalition in the hope of prying some away to thwart its establishment.

Netanyahu met Thursday with the heads of his blocs parties, Religious Zionism and the two ultra-Orthdoxo parties, United Torah Judaism and Shas to discuss the developments that threaten to see them pushed into the opposition. The meeting reportedly ended with suggestions for a mass ultra-Orthodox rally against the Lapid coalition which includes parties pushing secular rights. Those at the meeting also considered continuing backing protests held outside the homes of Yamina party lawmakers, the Walla news website reported.