Under heavy security and after several delays due to the coronavirus lockdown, Prime Minister Benjamin Netanyahu arrived Monday morning at the Jerusalem District Court for a much-anticipated court hearing in his corruption trial, focusing on his and other defendants’ response to the indictment and kicking off the intensified evidentiary phase of the trial.

Netanyahu’s motorcade as well as the other defendants, Shaul and Iris Elovitch and Arnon Mozes, arrived after security was stepped up, with snipers of nearby roofs — in line with Netanyahu’s normal security arrangements — and with little fanfare, after the premier on Sunday asked his supporters not to come to the court due to surging coronavirus infections.

Dozens of anti-Netanyahu protesters came near the court to protest against his rule, following weekly protests held in recent months.

It is the second time Netanyahu attends a hearing of his trial in person.

He will likely be required to verbally confirm the defense filed by his lawyers, who will present a series of verbal arguments in addition to their lengthy written response filed to the court last month.

The lawyers are expected to focus on procedural arguments such as the alleged lack of sufficient approval to launch the initial investigations and to issue search warrants for material, as well as a range of other defense claims in the case itself regarding the “precedential” nature of many of the charges.

Perhaps more importantly, the court will also discuss the timetable for the evidentiary stage of the trial, including whether its start will be postponed until after the March 23 Knesset elections and whether and to what extent Netanyahu will have to physically attend the expected three long hearings per week, which would consume much of his time, while he also manages the country.

Knesset Speaker and Netanyahu loyalist Yariv Levin insisted the court must postpone the trial’s upcoming phase. Proceeding now “will be lending a hand to blatant meddling in the elections,” he told the pro-Netanyahu Israel Hayom newspaper on Sunday.

Levin charged that it was unfair for the prosecution to present its case during the election campaign, while the defense rebuttals are scheduled for after election day.

Two courtrooms have been combined to accommodate the trial, which is overseen by judges Rivka Feldman-Friedman, Moshe Bar-Am and Oded Shaham.

The public is not able to watch the proceedings. Instead, CCTV footage is being broadcast to journalists in an adjacent room.

Prime Minister Benjamin Netanyahu at the start of his trial on corruption charges, May 24, 2020. Visible behind him are two of the three judges in the case, Rivka Friedman-Feldman and Oded Shaham (Screen capture/Government Press office)

Netanyahu faces charges of bribery, fraud, and breach of trust in Case 4000, which involves suspicions that he granted regulatory favors benefiting Elovitch, the controlling shareholder of Bezeq telecoms, in exchange for positive coverage of the prime minister and his family from the Bezeq-owned Walla news site. Elovitch and his wife, Iris, also face bribery charges in the case, and will also attend Monday’s hearing.

Netanyahu also faces charges of fraud and breach of trust in Case 1000, as well as in Case 2000. The former involves suspicions Netanyahu illicitly accepted some $200,000 in gifts such as cigars and champagne from two billionaires — Hollywood-based Israeli movie mogul Arnon Milchan and Australian magnate James Packer.

In Case 2000, Netanyahu is accused of attempting to reach a quid pro quo with Yedioth Ahronoth publisher Arnon Mozes for positive media coverage in exchange for legislation weakening rival newspaper Israel Hayom. Mozes was charged with bribery in the case and is required to attend the hearing.

Members of Netanyahu’s Likud party geared up Sunday to accompany him to the court, but Netanyahu reportedly ordered Likud MKs not to come to the hearing, due to surging COVID-19 infections. 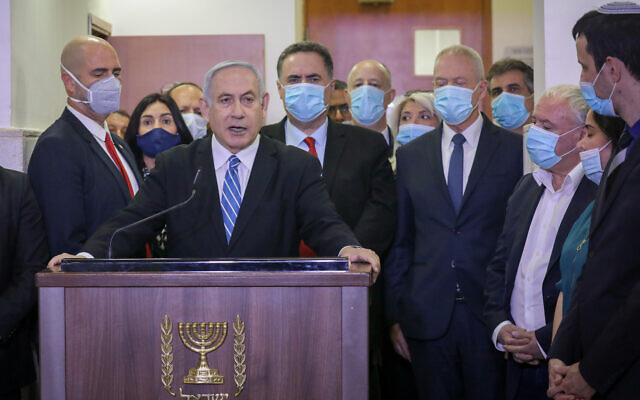 Prime Minister Benjamin Netanyahu, surrounded by Likud lawmakers, gives a televised statement before the start of his corruption trial at the Jerusalem District Court on May 24, 2020. (Yonatan Sindel/Flash90)

In the first hearing of the trial last May — the previous time Netanyahu was required to attend — most of the party’s lawmakers showed up and the premier made a long, fiery speech lambasting the justice system and saying the charges were “fabricated.”

Netanyahu repeated that claim Sunday, calling on his supporters not to come to the court to show solidarity with him, due to the high morbidity caused largely by the more infectious coronavirus variant originating in the UK.

“I know you want to give me strength in light of the fabricated and false cases against me,” said Netanyahu. “But we are at a time when a [mutated strain] is spreading around the world, and in Israel too, so for the sake of your own health I ask you: Don’t come tomorrow.”

Netanyahu’s trial opened in May. Though the prime minister attended the first hearing, he was granted an exemption from appearing at later, largely procedural stages of the trial.