Announcing that Benjamin Netanyahu had informed the president he was unable to form a government by the midnight Tuesday-Wednesday deadline, the Likud party placed the blame for the failure squarely and solely on Yamina leader Naftali Bennett.

“Because of Bennett’s refusal to commit to a right-wing government, a move that would definitely have led to the establishment of a government with additional MKs joining, Prime Minister Benjamin Netanyahu returned the mandate to the president,” Likud said a statement, released as the last minutes of Netanyahu’s 28-day allocation to build a coalition ticked away.

In fact, however, Netanyahu’s effort to muster a majority was doomed not by Bennett, or at least not solely by him, but by the Religious Zionism party, with its racist and homophobic Otzma Yehudit and Noam components — the far-right alliance of factions that, ironically, the Likud leader had himself brokered, before the March 23 elections, to ensure that no right-wing votes went to waste beneath the 3.25% Knesset threshold.

Netanyahu’s efforts paid off… in the short-term: Religious Zionism soared far above the threshold to win six seats, including one for Itamar Ben-Gvir, a disciple of the late racist Meir Kahane, who wants to expel “disloyal” Arab citizens. But the party’s gratitude to Netanyahu proved short-lived.

Post-election arithmetic dictated that the incumbent’s path to a Knesset majority required a reliance — be it inside the coalition or backing it from without — on the 4-seat conservative Islamic party Ra’am. And while Netanyahu had vowed before the election that he would not build a government that depended on Ra’am, once the votes were in and the seats distributed his Likud emissaries reached out to Ra’am leader Mansour Abbas. Abbas delivered a gracious speech a month ago about seeking to improve Israeli Jewish-Arab co-existence, went so far this week as to condemn the shooting of Israeli “innocents” in a terror attack at Tapuah Junction in the West Bank, and intimated that he was more than willing to ally with Netanyahu if he concluded this would benefit his constituents.

Despite relentless pressure from Likud, however, Religious Zionism, under its leader Bezalel Smotrich, was not prepared for any such association.

Netanyahu may have been ready to work with Ra’am — the political wing of the Southern Branch of the Islamic Movement, whose guiding charter is deeply hostile to Zionism and backs a “right of return” for Palestinian refugees — while simultaneously, absurdly, branding the likes of Bennett, Sa’ar and Liberman as leftists for the crime of seeking to oust him.  But Smotrich declared repeatedly that he considered Ra’am’s members to be supporters of terrorism.

The rabbi behind the Noam faction, previously hostile, earlier this week changed course and endorsed coalition dealings with Ra’am. But when the leading religious Zionist rabbi Chaim Druckman on Monday declared that the Israeli government should not be built on Arab votes — even though he later said he had met with Abbas, formed a “positive impression” of him, and been urged repeatedly by Netanyahu to approve the surreal combination of political forces — Netanyahu’s chance of forming a government was gone.

When the prime minister announced in his desperation Monday that he was even ready to let Bennett serve the first year as prime minister, if only Yamina would join his coalition, Bennett rebuffed him immediately with the accurate rejoinder that, even with Yamina, Netanyahu didn’t have the votes. “Smotrich burned the bridges leading to a right-wing government,” Bennett observed, referring to the Religious Zionism leader’s abiding refusal to enter a government propped up by Ra’am. 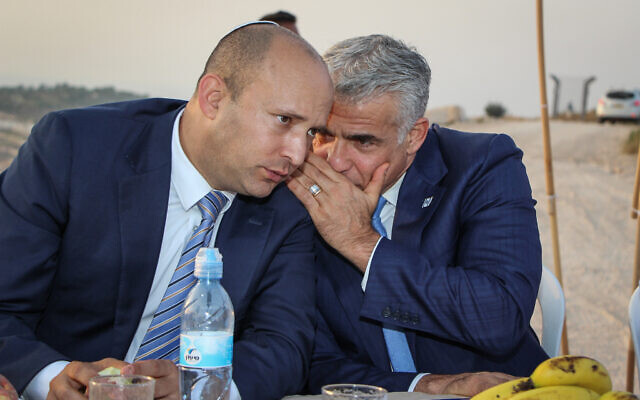 Naftali Bennett (L) and Yair Lapid during a ceremony at Netiv Ha’avot, at the West Bank’s Elazar settlement, on July 23, 2017. (Gershon Elinson/Flash90)

If, as is likely and expected, Yesh Atid leader Yair Lapid is now tasked with forming a coalition, and his negotiations with Bennett move ahead — with Lapid already having publicly offered Bennett first turn as prime minister under a rotation deal — they and the rest of the “change bloc” will also need the support of Ra’am and/or the Joint List to achieve a Knesset majority. There is no knowing at this stage whether all the ideologically diverse members of the anti-Netanyahu camp are prepared to rely on Arab parties for a majority — Yoaz Hendel, once of Blue and White and now of New Hope, for instance, implacably opposed the idea when Benny Gantz was contemplating it after the March 2020 elections. And there is no certainty at this stage, for that matter, whether Ra’am and/or the Joint List will play ball.

But by reaching out to Ra’am these past few weeks, Netanyahu’s Likud made clear it was prepared to break a historic taboo on Arab parties playing a determining role in the establishment of an Israeli government. It will thus be much easier for the members of the “change bloc” to contemplate such an arrangement, much though Netanyahu and Likud may try to denounce them.

After all, it was only the far-right Religious Zionism party that Netanyahu helped bring into the Knesset, shamefully legitimating its most extreme members, that torpedoed the Likud leader’s plan to do exactly the same thing.