The first meeting took place in the days ahead of the May 10 to May 20th Gaza conflict when tensions in Jerusalem were sky-rocketing over the looming evictions of several Palestinian families in the Sheikh Jarrah neighborhood as well as the police crackdown on Muslim worshippers at the Temple Mount, Channel 12 reported Friday.

Also during that meeting, Netanyahu urged Abbas to ignore the comments being made by Likud MKs who were denying that any talks had taken place between the two parties or that anything significant had been offered to the Islamist faction, Channel 12 said.

“Ignore the interviews being given by senior Likud members denying the formation of the government with you, your very presence here today says it all,” the network quotes Netanyahu as having told Abbas.

Netanyahu and Likud have continued to publicly deny the existence of high-level talks aimed at coaxing Ra’am to join their right-wing government. Initially, Ra’am leaders said they would not be drawn into such petty matters, but over the past several days, its lawmakers have warned that if Likud’s rhetoric against the party would not cease, they would be forced to respond.

The party reportedly has tape of one of Netanyahu’s phone conversations with Abbas in which he pleads with the Ra’am chairman to stick with his right-wing, religious bloc despite not having the numbers to form a coalition.

The Friday leak to Channel 12 appeared to be a step in the direction of leaking such tapes.

The network said that during that first Balfour meeting, Netanyahu told Abbas that the government Bennett and Lapid were seeking to form would not last and that Likud would be able to deliver on far more of Ra’am’s requests than the unity government will be able to.

Abbas used the opportunity to urge Netanyahu to cancel or delay the looming Sheikh Jarrah evictions and order police to tame their tactics against worshipers at the Temple Mount, which Muslims refer to as the Haram al-Sharif.

Netanyahu promised him that he’d act on the evictions, but claimed that Attorney General Avichai Mandelblit was delaying a decision on the matter.

This was not the only meeting held between the two, and Abbas visited the prime minister’s residence several other times, according to Channel 12.

In an interview last week, Abbas told the Kan public broadcaster that he had preferred to conduct his initial negotiations with Netanyahu, enabling him to gain legitimacy not only on the right but also among the center and left.

Ra’am, affiliated with a local branch of the Muslim Brotherhood movement whose charter calls Zionism “racist” and backs a right of return for Palestinian refugees and their descendants, has never been part of a governing coalition.

But in recent months, Abbas took major steps toward recognition from mainstream Israeli parties, softening his rhetoric and conducting extensive negotiations over political cooperation with Netanyahu’s Likud. However, after the premier’s far-right ally Bezalel Smotrich vetoed a Ra’am-backed right-wing government, Abbas went on to sign an unprecedented coalition deal with the “change bloc.”

The meeting first meeting took place during Ramadan so Abbas wouldn’t accept anything to eat or drink. Sara Netanyahu dropped by as well to say hello.

During that visit, Netanyahu gave Abbas a tour of the official residence on Balfour Street, reportedly pointing out leaks in the walls that the premier claimed could not be fixed for fear of retribution in the media, which has criticized the Netanyahus for their luxurious lifestyle at public expense. 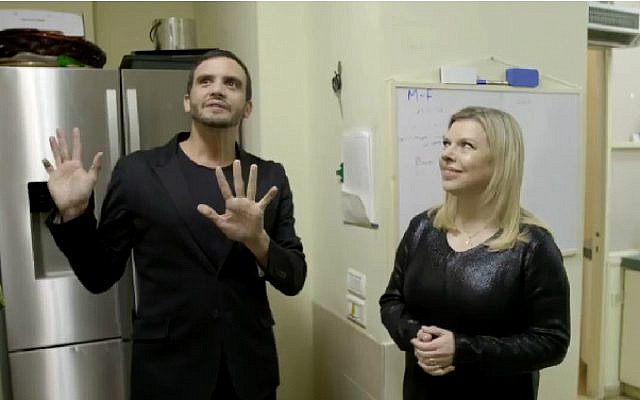 Celebrity interior designer Moshik Galamin expresses to Sara Netanyahu his shock at the dilapidated state of the kitchen at the Prime Minister’s Residence. (Screen capture/YouTube)

The residence’s peeling wallpaper was featured in an interview Netanyahu’s wife Sara held with interior designer Moshik Galamin ahead of the 2015 election, apparently aimed at highlighting the modest conditions in the prime minister’s residence.

Both Benjamin and Sara Netanyahu have been embroiled in scandals over the misappropriation of state funds at the official residence, along with Netanyahu’s corruption case in which the couple is accused of receiving hundreds of thousands of dollars worth of cigars and champagne in illicit gifts.