Prime Minister Benjamin Netanyahu has reconciled himself to the fact that his political rivals are on the cusp of forming a government that will see him removed as premier, associates of Israel’s longest-serving leader said Thursday.

The comments came a day after Netanyahu’s Likud party for the first time said he is committed to a peaceful transition of power, clarifying the premier’s claims of “election fraud.”

Netanyahu’s office has refused to state whether he will attend the traditional handover ceremony of the premiership on Monday, and a transitional briefing with incoming prime minister Naftali Bennett has not yet been scheduled, with the government swear-in less than three days away.

Bennett is set to become premier after agreeing to form a government with opposition leader Yair Lapid of the Yesh Atid party and a wide array of parties aligned against Netanyahu, ranging from the dovish Meretz to the pro-annexation New Hope and the Islamist party Ra’am. Under the agreement, Bennett will serve as prime minister for two years before handing the office to Lapid for the remainder of the term.

“To my great sorrow this government is set to come into being. We did everything we could to prevent it, but didn’t succeed. We’re not engaged in tricks. We’ll serve the nation from the opposition and very quickly return to the leadership,” Likud MK Miki Zohar told Army Radio on Friday morning.

Echoing Zohar, Likud MK David Bitan said he did not believe there was any remaining way to prevent the government from being sworn in.

“We have no problem with being in the opposition, we won’t give our opponents any joy,” Bitan said in an interview with Kan public radio. “Our chances of returning to power are quite high.”

He predicted the proposed government would come apart after a year.

“They have a goal to bring down Netanyahu, which they will accomplish on day one. After that they’ll have problems. It’ll be very difficult for them to cooperate and do things,” he said.

Bitan also leveled some criticism at Netanyahu over the dissolution of the short-lived unity government that Likud formed with Defense Minister Benny Gantz’s Blue and White party, which triggered the recent national elections.

“In retrospect it’s clear today that it was a mistake by Netanyahu not to implement the rotation with Gantz. Relative to what happened, he made a mistake,” Bitan said. 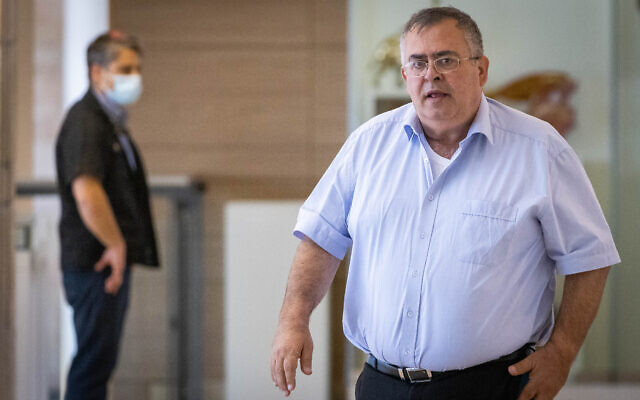 Netanyahu’s Likud and Gantz’s Blue and White agreed to form a coalition in April 2020, after three consecutive inconclusive elections. But just over six months after it was formed, the government was dissolved when the sides could not agree on passing a 2020 budget, and a new election was called for March 2021. The move was widely seen as being engineered by Netanyahu so as to avoid handing over the premiership to Gantz, as stipulated in the coalition agreement between them.

Interior Minister Aryeh Deri, whose ultra-Orthodox Shas party is allied with Likud, said Thursday he should have worked harder to keep the unity government from falling apart.

The Knesset is scheduled to vote Sunday on establishing the new government. If confirmed, the unlikely alliance of right-wing, left-wing, centrist and Islamist parties will remove Netanyahu from power after 12 consecutive years. Netanyahu was also premier for over 3 years in the late 1990s.