Prime Minister Benjamin Netanyahu will reportedly ask the Trump administration for a green light to advance construction plans in an area of East Jerusalem.

According to the Kan public broadcaster, Netanyahu told associates he intended to raise the matter with US Secretary of State Mike Pompeo, who arrived in Jerusalem on Wednesday for a two-day visit.

“I will ask the secretary of state to advance thousands of homes,” Netanyahu was quoted as saying.

Unnamed sources who spoke with Netanyahu told the broadcaster that the premier wants to establish facts on the ground before US President-elect Joe Biden takes office in January.

The Prime Minister’s Office declined to comment on Kan’s report.

In February, Israel began advancing plans to build a massive Jewish neighborhood with 9,000 housing units at the site of the Atarot Airport, which has been inoperative since the breakout of the Second Intifada in 2000.

The new neighborhood in Atarot would break a long stretch of Palestinian urban areas extending from the East Jerusalem neighborhoods of Beit Hanina and Shuafat north to Kfar Aqab, Qalandiya and Ramallah on the other side of the security barrier.

The Kan report came days after bidding opened to construct 1,257 units in a controversial planned neighborhood elsewhere in East Jerusalem, with critics saying building in the sensitive location would harm the prospects of a future contiguous Palestinian state. 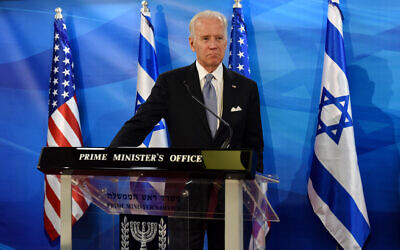 Joe Biden during a joint press conference with Benjamin Netanyahu, not seen, at the Prime Minister’s Office in Jerusalem, March 9, 2016. (Debbie Hill, Pool via AP)

Bidding on the project in Givat Hamatos will run until January 18 — only two days before the relatively settlement-friendly Trump administration is replaced by that of Biden — when the government will announce which contractors won the bidding war.

Coalition whip Miki Zohar, a Likud party ally of Netanyahu’s, seemed to imply Sunday that Netanyahu was utilizing Trump’s final days in office to pursue the controversial move, with the Biden administration likely to cast a far more baleful gaze upon such construction.

Zohar is a member of the Land of Israel Caucus group, a cross-party lobby within parliament made up of right-wing lawmakers, which is currently collecting signatures on a petition calling on the prime minister to legalize some 70 illegal West Bank outposts, upping the pressure on Netanyahu to take advantage of the outgoing administration’s goodwill toward settlements.

Pompeo is expected to visit a winery in a West Bank settlement during his visit, becoming the first high-ranking American official to do so.