With just one day remaining for him to form a coalition, Prime Minister Benjamin Netanyahu has reportedly agreed to a plan that would allow Yamina party head Naftali Bennett to try and put together a right-wing government, in return for him committing to a series of measures that could help the premier put an end to his ongoing criminal trial.

While Yamina’s negotiating team was meeting with representatives of the Yesh Atid party last week, Channel 12 news reported Sunday, Bennett and Netanyahu held a secret meeting, not disclosed to the media, where they discussed the details of a potential rotation government between the two.

According to a Walla news report Monday, Netanyahu offered to back Bennett to put together a coalition and be prime minister first in a rotation if the Yamina leader committed to giving Likud control over the Justice Ministry and passing a law that would allow the lawmakers to override Supreme Court decisions striking down Knesset legislation.

Both measures could theoretically help Netanyahu in his reported efforts to cancel the charges of bribery, fraud and breach of trust against him and prematurely end his criminal trial. In controlling the Justice Ministry, Netanyahu would be able to appoint a new attorney general when Avichai Mandelblit’s tenure ends in the coming months; and a Supreme Court-override law could allow him to pass legislation against putting a prime minister on trial. Netanyahu has in the past refused to rule out the possibility of legislation to provide him immunity from conviction, even after his criminal trial has begun.

Both Likud and Yamina denied the Walla report, with Bennett’s party saying “no such things” were discussed between the two leaders.

“There is no such proposal and there is no importance to such proposals for Yamina as long as Netanyahu has no way to form a right-wing government,” the party said in a statement.

Though Yamina won just seven seats in the March election, Bennett has become a potential kingmaker and even king, having not yet declared who he will back as prime minister. He has said that he will support a right-wing government headed by Netanyahu if the prime minister has the votes, but will work toward a unity government without Netanyahu if not. 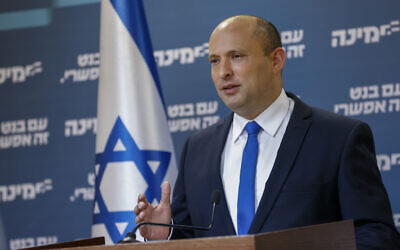 Yamina leader Naftali Bennett delivers a statement to the press at the Knesset on April 21, 2021. (Yonatan Sindel/Flash90)

Even if Likud and parties supporting Netanyahu were to back Bennett to form a coalition, Netanyahu would still need to convince the far-right Religious Zionism and Islamist Ra’am to cooperate — which they are currently unwilling to do.

On Sunday night the spiritual head of the far-right Noam faction within Religious Zionism published an open call for Netanyahu to form a right-wing coalition with the backing of Ra’am.

Religious Zionism, however, released a statement in response saying that “there is not and will not be a change in the position of Religious Zionism regarding reliance on terror supporters who deny the existence of Israel as a Jewish state.”

The elections, the fourth since April 2019, ended in gridlock, with Netanyahu’s right-wing religious bloc again coming short of a ruling majority, in part because three right-wing parties ran with the declared goal of replacing him. Barring an unexpected breakthrough, Netanyahu has no clear way of putting together a ruling coalition.

If Rivlin does task another Knesset member with forming a government, it is widely expected to be either Bennett or Yesh Atid leader Yair Lapid, who have been holding talks together on forming a unity government without Netanyahu.

However, Bennett is said to be facing reluctance from within his own right-wing nationalist party to cooperate with Lapid, and some of his Yamina’s seven lawmakers may not agree to join such a coalition, which would also require the backing of Arab lawmakers. And Yamina No. 2 Ayelet Shaked has reportedly been working hard against the prospect of a unity government with the center-left.

According to the Kan public broadcaster, amid the disagreements within Yamina and the latest reports of Bennett’s cooperation with Netanyahu, Yesh Atid told Bennett Monday that negotiations would be put on hold until the Yamina chair publicly declares his support for a unity government without Netanyahu.

Should no government be formed, the country will head to its fifth election in two and a half years.