Former prime minister Benjamin Netanyahu spoke several times in recent days with Pfizer CEO Albert Bourla and Moderna CEO Stéphane Bancel, reportedly behind the back of his successor Naftali Bennett, as he continues his push to have a third coronavirus vaccine dose administered to Israelis.

Netanyahu’s Likud party initially leaked details of the conversations to several Hebrew media outlets on Wednesday, which reported that the calls took place without Bennett’s knowledge. Netanyahu’s office later issued a statement saying the pharmaceutical executives updated him on their vaccine supply and on the spread of the Delta variant.

“This is the only way to protect the population, to save lives and to keep the economy open in light of the outbreak of the Delta variant,” Netanyahu said in a video statement.

Pfizer has been seeking FDA authorization for a third shot, though the US regulator and Israeli health officials have said there is no evidence boosters are needed at this time. Israel is currently offering a third dose to the immunocompromised.

For weeks, Netanyahu has insisted that third doses are necessary immediately, but some analysts have questioned if the position is more rooted in his desire to distance himself from the new government’s policies on the pandemic.

In a video released on his social media channels on July 1, Netanyahu declared that “from conversations I’ve had with some of the best experts in the world, I believe the third vaccine [dose] should be given to the over-50 population starting in August, in order to finish the task by the end of September.

Israel’s successful vaccination campaign was rolled out during Netanyahu’s tenure, after he secured agreements that made Israel the world-leading country on COVID immunizations. The longtime premier was removed from power last month.

On Monday, Channel 13 reported that Israel has reached a secret agreement with Pfizer-BioNTech, under which the pharmaceutical company will immediately provide shipments of immunizations to the Jewish state if Israel declares that it is administering booster COVID-19 shots.

It would supplant existing deals on deliveries, with Israel scheduled to receive a small shipment at the beginning of August and another, bigger delivery in October, the network said.

The Health Ministry on Sunday alerted health providers and clinics to not administer a third COVID vaccine booster shot to most patients undergoing cancer treatment.

The number of Israelis with the coronavirus has surged over the past month as the ultra-contagious Delta variant takes hold in the country. Health Ministry morbidity figures published Wednesday showed there were 1,410 new cases of COVID-19 diagnosed on the day before, compared to a daily caseload of just a few dozen a month ago.

Israel’s current stockpile of Pfizer vaccines is slated to expire at the end of July, but Bennett announced earlier this month that he’d brokered a new deal with Pfizer to bring forward a projected delivery to August 1. That deal was intended to enable the continuation of a campaign aimed at vaccinating youths aged 12-15. 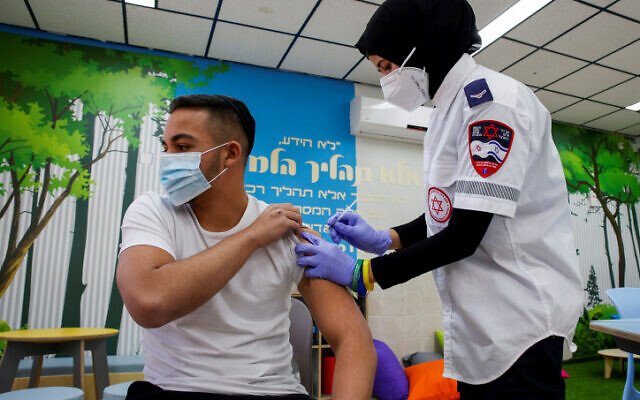 Israel is also slated to receive 700,000 doses from South Korea at some point after a swap deal for Israel’s expiring doses was agreed to earlier this month.

The Delta variant of the coronavirus is believed to be more successful in bypassing the vaccines than previous strains of the virus. Health Ministry figures released in early July indicated that the Pfizer COVID-19 vaccine is only 64 percent effective in preventing infection, but remains 93% effective in preventing hospitalization and serious symptoms.

Some health officials have cast doubt on these figures, noting that they were gathered only over a period of a month, and maintaining that the Pfizer vaccine is actually more effective against the Delta variant than claimed. Nevertheless, Pfizer cited data from Israel in seeking authorization from the US Federal Drug Administration for a third booster dose of its vaccine.