Prime Minister Benjamin Netanyahu’s Likud party on Wednesday signed a surplus vote-sharing agreement with the far-right Religious Zionism, which includes the Kahanist Otzma Yehudit and the anti-LGBT Noam factions, ahead of next month’s Knesset elections.

The move further aligns the premier with extremists such as Itamar Ben Gvir, a disciple of the late far-right extremist rabbi Meir Kahane. His Otzma Yehudit party — which recently joined forces with the Religious Zionism party — supports encouraging emigration of non-Jews from Israel and expelling Palestinians and Arab Israelis who refuse to declare loyalty to Israel and accept diminished status in an expanded Jewish state, whose sovereignty would extend throughout the West Bank.

Ben Gvir is in the third slot on the merged slate, which most polls have shown clearing the Knesset threshold and clinching 4-5 seats in the March 23 elections.

Vote-sharing agreements, which are widely used in Israeli elections, allow parties to ensure that extra votes they win that don’t add up to a Knesset seat do not go to waste. Instead, a party to transfer those votes to another party through a special agreement.

Under the law, the combined leftover votes go to the party closest to winning another seat — and are often sufficient to add that seat to its tally, making the votes potentially decisive in a close race.

Such deals only count if both parties pass the electoral threshold of 3.25 percent of the votes.

Religious Zionism, headed by Bezalel Smotrich, announced the development in a statement that said the party “insisted that Netanyahu commit to forming a right-wing government whose basic guidelines will include safeguarding the Land of Israel, strengthening the state’s Jewish identity, strengthening the capacity to govern and advancing the economy and Israeli society’s welfare.”

The deal also stipulates that Likud and Religious Zionism will make efforts to bring about the success of both parties in the upcoming elections.

Religious Zionism vowed in the agreement to not support anyone but Netanyahu as prime minister for the entire term of the 24th Knesset, while Likud promised that Religious Zionism will have a representative in any government formed by Netanyahu.

“As we said all the while, alongside the treatment of the coronavirus crisis and the economy, we won’t enable the formation of a center-left government that will set aside the values of religious Zionism and the right for the coming years,” Smotrich’s party said. “We have an ideology and we will do everything to form a right-wing government.”

Last month, the right-wing New Hope and Yamina parties signed a vote-sharing deal, as did the Yesh Atid and Yisrael Beytenu parties. Earlier this week, Benny Gantz’s Blue and White signed such a deal with Yaron Zelekha’s New Economic Party, though both parties — especially Zelekha’s — are in danger of failing to make it into the Knesset.

Such agreements are usually signed between parties that are politically or ideologically close. The right-wing, secularist Yisrael Beytenu has previously signed agreements with Likud, but the party’s leader, Avigdor Liberman, fell out with Netanyahu after the April 2019 elections. 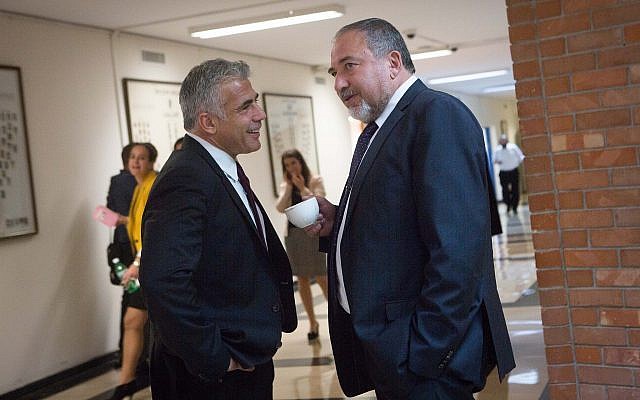 Yamina, too, has drifted away from Likud. But while the New Hope leader Gideon Sa’ar — a former Likud minister — has repeatedly vowed that he will not sit in a coalition with Netanyahu, Yamina chief Naftali Bennett has stopped short of entirely rejecting his former ally, saying that he aims to replace him as prime minister, but has not ruled out serving with or under him in a coalition.

The deal between New Hope and Yamina was seen at the time as threatening to leave Likud without a vote-sharing deal for the first time since 2003, with Netanyahu’s ultra-Orthodox allies Shas and United Torah Judaism expected to sign an agreement among themselves.

Likud has signed vote-sharing agreements with Yamina or other national-religious factions in the past five elections. This time around, Netanyahu worked extensively behind the scenes to have Smotrich split from Yamina and join forces with the extremist factions.

The deadline for signing vote-sharing deals is March 12, 11 days before the elections.

Despite enjoying a lead in recent polling, Netanyahu’s Likud, Shas, and UTJ lack a clear path to forming the next coalition due to the animosity from the other right-wing parties.

Various arrays of anti-Netanyahu parties — New Hope, Yamina, Yisrael Beytenu, Blue and White, Yesh Atid, Labor and Meretz — similarly lack a majority between them in most polls. Since they range across the political spectrum from right to left, it is not clear that all of them would agree to sit in a government together.

New elections, the fourth since April 2019, were called in December after the power-sharing government of Likud and Blue and White failed to agree on a budget by a December 23 deadline.