Preparations are underway as Reuven Rivlin is set to become Israel’s tenth former president when his term comes to an end in July.

Rivlin has already rented a new apartment on Jerusalem’s King David Street for when he leaves his official residence. Last month he sold his apartment in the Yefeh Nof neighborhood of Jerusalem, saying he did not wish to return there without his wife Nechama, who died in 2019 on the eve of her 74th birthday, after relapsing following a lung transplant.

Former presidents receive financial provisions for an apartment from the state for the remainder of their lives.

Rivlin said that he chose the location of the new apartment due to its proximity to his nine grandchildren.

“I will be the tenth president and former president, and being a young man whose future is ahead of him I will have to consult with the grandchildren,” he jokingly told the Ynet news site when asked about his post-retirement plans.

According to a report by the outlet on Sunday, preparations are also being made in the garden of the President’s Residence, with a plinth readied for a sculpture of Rivlin to join his nine predecessors.

The report said work on the sculpture is underway and it will be installed on the day Rivlin’s successor moves into the residence. 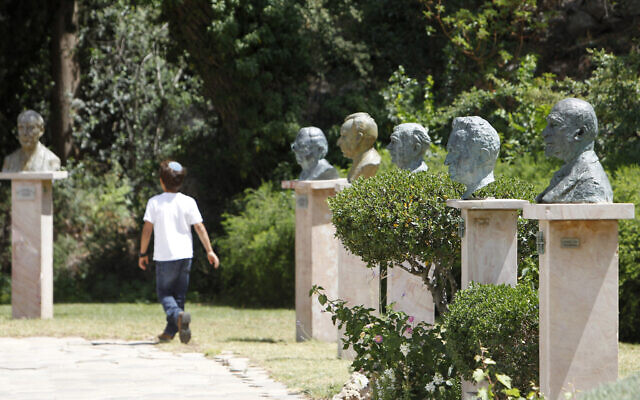 A young boy walks past sculptures of former Israeli presidents in the garden of the President’s Residence in Jerusalem on June 2, 2014 (Miriam Alster/FLASH90)

It remains unclear who that will be. Israel’s presidents are elected by the Knesset and serve a single seven-year term; elections must be held between 90 and 30 days prior to the end of the incumbent’s term, but a date has not yet been set for that amid Israel’s ongoing political turmoil.

A number of candidates have expressed interest in the role, including former Labor chairman Amir Peretz and ex-MK and Temple Mount activist Yehudah Glick.

Former Labor minister and law professor Shimon Sheetrit and actor and singer Yehoram Gaon have also thrown their hats into the ring.

Additionally, a number of polls have suggested widespread public support for Israel Prize winner Miriam Peretz, an educator who lost two sons in wars 12 years apart during their military service.