In the week beginning January 4, over 5 million new cases were detected worldwide, while this past week saw 2.4 million infections, or less than half the number from six weeks earlier. Week over week, new infections were down last week by 11.7 percent from the week before.

The sharp decline was prominent in the Americas, where new daily cases dropped from a peak of over 444,000 on January 10 to 169,000 on Sunday, according to WHO tallies. Europe also saw 150,000 fewer cases on Sunday compared to six weeks earlier.

New cases also declined in two of the other four WHO regions, Africa and the Western Pacific, while the Eastern Mediterranean and Southeast Asia each saw a rise in infections last week.

COVID-19 deaths also dropped globally, albeit at a slower rate. During the week starting January 25, nearly 99,000 people died around the world of the virus, a record since the COVID-19 pandemic began. The numbers of fatalities have declined in subsequent weeks, with some 66,000 deaths recorded worldwide last week.

A Roman Catholic priest stands next to the body of a COVID-19 victim at the coronavirus ward at University Hospital J.A. Reiman in Presov, Slovakia, on February 18, 2021. (Vladimir Simicek/AFP)

At a press conference last week, the UN health agency’s chief attributed the decline in new infections to public health measures adopted to battle the pandemic.

“What matters now is how we respond to this trend. The fire is not out, but we have reduced its size. If we stop fighting it on any front, it will come roaring back,” Tedros Adhanom Ghebreyesus warned.

The latest weekly decline in new COVID-19 cases came as the global death toll from the pandemic neared 2.5 million, with an AFP tally released earlier Monday showing at least 2,466,453 people have died since the outbreak emerged in China in December 2019.

The figures were based on daily tolls provided by health authorities in each country and excluded later reevaluations by statistical organizations, as has happened in Russia, Spain and Britain.

Based on the latest reports, the countries with the most new deaths were the United States with 1,311, followed by Brazil with 527 and Russia with 337. 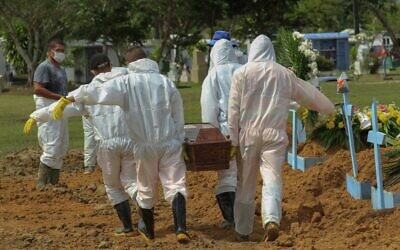 The country with the highest number of deaths compared to its population was Belgium with 189 fatalities per 100,000 inhabitants, followed by Slovenia with 182, the Czech Republic 181, the United Kingdom 178 and Italy 158.

Since the start of the pandemic, the number of tests conducted has greatly increased while testing and reporting techniques have improved, leading to a rise in reported cases.

However, the number of diagnosed cases is only a part of the real total number of infections as a significant number of less serious or asymptomatic cases always remain undetected.

As a result of corrections by national authorities or late publication of data, the figures updated over the past 24 hours may not correspond exactly to the previous day’s tallies.