NEW YORK — New York City residents cast ballots in a Democratic primary Tuesday that will select the candidate almost certain to take over as mayor tasked with shaping the post-pandemic future of America’s largest metropolis.

Registered Democrats will choose from a diverse group of 13 candidates for the job often called “the second-most difficult” in the United States, after that of president.

Voters head to polls with COVID-19 still casting a long shadow over the Big Apple, the epicenter of America’s early outbreak, which has lost 33,000 people to the virus.

But the city is now coming back to life — virtually all coronavirus restrictions have been lifted, and 66 percent of adults have received at least one vaccine dose.

A crowded field of progressives and moderates face off in a race made all the more uncertain by a new ranked-choice system of voting that has clouded all predictions.

The winner of the vote is unlikely to be known for several weeks. Since New York is a Democratic stronghold, though, they are virtually guaranteed to win November’s mayoral election against whomever Republicans choose as their candidate.

Elections inspector Brian Linden, left, goes over a ranked choice voting explanation card with Elena Batyuk before she casts her vote during early voting in the primary election, Monday, June 14, 2021, at the Church of St. Anthony of Padua in the Soho neighborhood of New York. (AP/Mary Altaffer)

Unemployment, homelessness, shootings and homicides have all surged since the coronavirus struck. Thousands of businesses have closed, tens of thousands of wealthier residents have fled and many employees are still working from home.

The pandemic, demonstrations sparked by the murder of George Floyd in May 2020, and attacks on Asian Americans have also highlighted the extent of racial inequalities in the city of 8.5 million.

New York’s first new mayor in eight years will have to contend with projected budget gaps of several billion dollars each in the next few years.

They will succeed unpopular far-left Democrat Bill de Blasio, who has been mayor since January 2014. 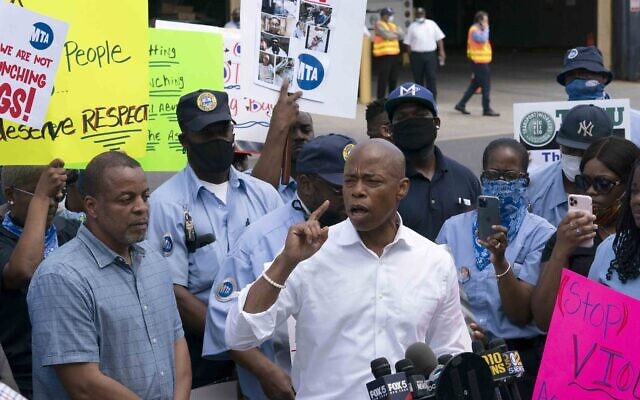 This photo from Thursday June 10, 2021, shows Democratic mayoral candidate Eric Adams as he address workers from TWU Local 100 about the rise in assaults against transit workers in New York. (AP/Mark Lennihan)

Eric Adams, a moderate, Black ex-policeman and president of the borough of Brooklyn, has been leading in most recent polls, putting crime at the forefront of his campaign.

Tech entrepreneur Andrew Yang, who ran for US president, is also a moderate and was frontrunner for much of the campaign.

Kathryn Garcia, another moderate, and Maya Wiley, a Black lawyer specializing in civil rights who was endorsed by Alexandria Ocasio-Cortez, are bidding to become New York’s first woman mayor.

The new voting system, which asks voters to rank up to five candidates in order of preference, makes predictions almost impossible. 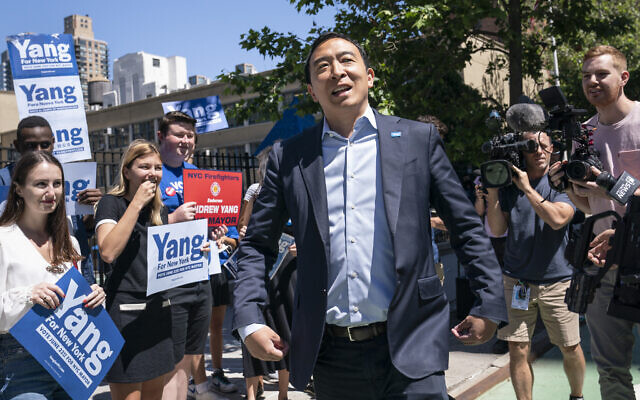 Unless a candidate immediately garners more than 50 percent of the votes — an unlikely scenario — the candidate who came in last is eliminated, and the ballots cast for them are redistributed to voters’ second choice, and so on until a candidate finally exceeds the 50 percent threshold.

This may not produce a clear winner until mid-July.

More than 191,000 people have already cast ballots during the nine-day early voting period that ended Sunday. Tens of thousands of absentee ballots will also need to be counted.