KABUL, Afghanistan (AFP) — The Taliban’s pitch to the Afghan people has always been simple — life under their hardline rule would finally bring security after decades of war.

Notorious for using suicide bombers during their insurgency, the Taliban are charged with guarding against the same kind of attacks now that they are in power.

The Islamic State-claimed blasts at Kabul airport on Thursday, which killed at least 95 Afghans as well as 13 US troops, is an early test.

“Last night’s attacks have shown once again that no one group can claim monopoly over violence in Afghanistan or claim to secure it,” said Abdul Basit, a research Fellow at S. Rajaratnam School of International Studies in Singapore.

Taliban spokesman Bilal Karimi told AFP after the attack that IS “will be defeated.”

But they sidestepped their own role in freeing some its prisoners.

Clothes and blood stains of Afghan people who were waiting to be evacuated are seen at the site of the August 26 twin suicide bombs, which killed scores of people including 13 US troops, at Kabul airport on August 27, 2021. (WAKIL KOHSAR / AFP)

During the Taliban blitz, which ended with the takeover of Kabul on August 15, a familiar pattern emerged — when each city fell, the jihadists would head for the prisons.

With thousands of seasoned Taliban fighters behind bars across Afghanistan, the tactic focused on allowing the group to replenish their depleted ranks.

But contrary to the Taliban’s liking, others including battle-hardened militants from the Islamic State’s Afghanistan-Pakistan chapter (IS-K) were also freed.

Hailing from different theological branches of hardline jihadist thought, the two sides have duked it out in bloody clashes for years in Afghanistan.

The spree of prison breaks increasingly looks to have been a lethal error — seeding the future battlefield with the Taliban’s enemies, while their own forces are stretched thin.

Before the Kabul airport attack, the Taliban were already trying to distance themselves from the prison debacle, piling blame on former president Ashraf Ghani who has fled the country. 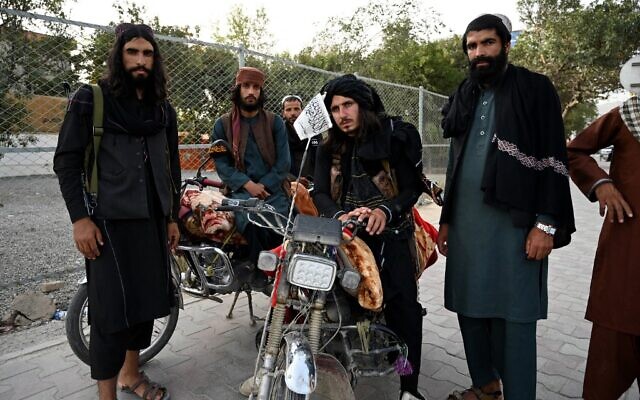 Taliban fighters stand along a road in Kabul on August 18, 2021, after the Taliban’s military takeover of Afghanistan. (Wakil KOHSAR / AFP)

“We are cautious and careful because prisoners from Daesh (IS) fled the jail and are hiding now after officials of the Kabul administration abandoned their posts,” Taliban spokesman Suhail Shaheen told Pakistani broadcaster Geo News this week.

Shaheen said the Taliban were aware of reports of the imminent threat posed by the group, as a string of Western governments warned IS was aiming to target the airport.

“Our intelligence department and security forces are active in order to avoid such an incident which can cause loss of human lives,” Shaheen added.

The Taliban has also pointed the finger at Washington, saying the security in the area of the blasts was controlled by the US.

Their fighters continue to man a network of checkpoints leading to the airport but a loosely secured no man’s land separates them from the American troops manning the gates.

With the Americans pulling out in a matter of days, the Taliban will have few excuses moving forward.

During its last rule in the 1990s and in areas controlled by the Taliban over recent years, the hardline Islamist group has been known for handing out swift but heavy-handed justice — unlike the government it has ousted.

But the inability to prevent future bombings may erode the little public trust they have secured since capturing the capital. 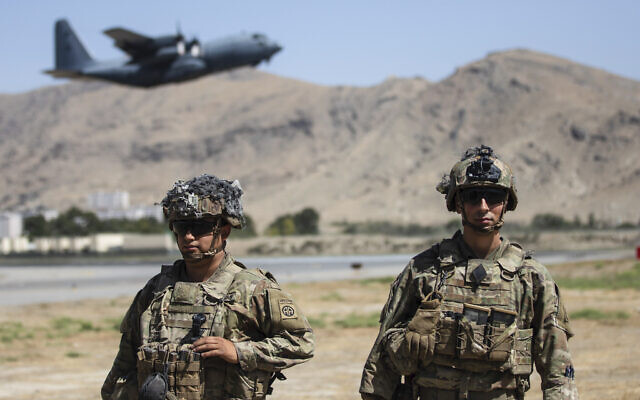 US paratroopers assigned to the 1st Brigade Combat Team, 82nd Airborne Division conduct security as they continue to help facilitate the evacuation at Hamid Karzai International Airport in Kabul, Afghanistan, August 25, 2021. (Department of Defense via AP)

“Taliban checkpoints that dot around the city failed to catch the perpetrators of the Kabul airport attack,” said Nishank Motwani, an Afghan analyst based in Australia. “But that’s based on the assumption the Taliban intended to provide security in the first place to protect lives.”

There is no love lost between IS and the Taliban, with the airport attacks laying bare a years-long fight between the rival jihadist outfits.

IS-K has been responsible for some of the deadliest attacks of recent years including a string of gruesome blasts at mosques, schools, rallies, and even hospitals.

The Taliban, however, remained confident of their ability to bring the group to heel, and even after Thursday night’s airport carnage they want to convince Afghans they will be safe under their rule.