The last time there were fewer than 20,000 active infections was on July 12. The figure rose as high as 72,164 on October 2, when Israel was already in a lockdown implemented to bring the spread of the virus under control.

The number of serious cases has also dropped, after peaking at 900 on October 4. According to the Health Ministry’s latest figures, there were 596 people in serious condition.

The last time the number of seriously-ill patients fell below 600 was on September 18, the first day of the lockdown.

However, the trailing effects of the virus are continuing to take a toll even as new infections recede. Health Ministry figures showed 232 patients hooked up to ventilators; the number of patients on ventilators has slid between 215 and 240 since the start of the month.

Deaths have also continued to pile up. The national death toll stood at 2,291, with 13 deaths since Tuesday night.

A medical worker in protective clothing tests a man for coronavirus at the Hebrew University of Jerusalem, on October 21, 2020. (Olivier Fitoussi/Flash90)

Though infection rates have dropped markedly since the lockdown first took effect on September 18, there has also been a fall in testing levels, which reached a record high of 50,000-60,000 per day last month.

A military task force said Wednesday that while Israel was continuing to gain control over the outbreak, the morbidity rate remained very high in absolute numbers. 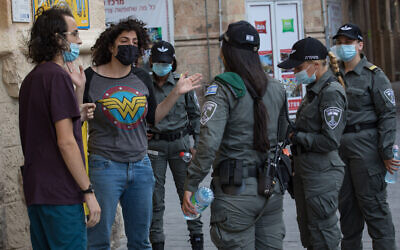 On Sunday, the lockdown began to be eased, with preschools and kindergartens allowed to open. A one-kilometer limit on travel for non-essential needs was also lifted and restaurants can again offer takeout.

The so-called coronavirus cabinet met Wednesday to discuss allowing shops and more schools to reopen, but pushed off a decision until next week.

During the meeting, Prime Minister Benjamin Netanyahu called for the Health Ministry’s nine-stage plan for lifting the lockdown to be shrunk to five phases, but health officials expressed concerns about doing so.

Following the initial coronavirus lockdown, health officials abandoned their staged plan amid pressure from ministers and opened nearly all schools and businesses at once in early May — which has been blamed for playing a part in runaway infection rates over the summer that led to the second national closure.