JTA — Jewish schools and other private schools in New York City will remain open even as the city shutters its public school buildings starting Thursday, amid a rise in new COVID-19 cases in the city.

City officials decided this summer to shift all schools to virtual learning if the city’s seven-day test positivity rate reached 3%. That happened Thursday, according to the city’s data.

But the rules do not affect the city’s private schools. That’s because every public school district and private school in New York state was required to write their own reopening plans, including their own thresholds for closure.

New York City, one of the only major school districts in the country to reopen with some in-person instruction at all, set a conservative threshold of 3%, which the state approved.

The announcement that city schools would close came amid ongoing confusion about whether New York City Mayor Bill de Blasio or New York Governor Andrew Cuomo would make the decision. But even as the mayor and governor openly squabbled Wednesday, Jewish day schools rushed to reassure families that they would remain open.

“We will continue to stay open as long as we can keep our numbers low, and our community safe,” one school emailed families moments after the official closure announcement came down. “Or unless the governor instructs independent schools to close.”

Indeed, Cuomo could decide at any time that conditions have grown unsafe to continue operating schools. Last month, he implemented new rules to target “micro-cluster” zones with higher positivity rates. Those zones, which can be designated red, orange or yellow depending on the severity of the COVID cluster, can trigger school closures. 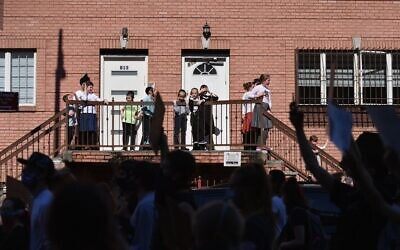 Illustrative: Members of the Orthodox Jewish community watch as protesters walk through the Brooklyn borough on June 3, 2020, during a “Breonna Taylor and Black Lives Matter” protest in New York City (Photo by Angela Weiss / AFP)

Some neighborhoods in New York City, including several Orthodox neighborhoods in Brooklyn and Queens, have already been designated as micro-cluster zones and had schools closed temporarily. (Parents say some yeshivas in those areas continued to operate in person despite the governor’s orders.)

But at the moment, no new micro-cluster zones have been designated.

“New York City has various positivity rates across the city, and has not been designated an orange zone,” Jill Montag, public information officer for the New York State Department of Health, said in an email. “The micro-cluster strategy is designed to target smaller zones that we have identified.”