Former US president Barack Obama sent a farewell letter to President Reuven Rivlin ahead of his departure from office Wednesday, applauding his efforts to protect democracy in Israel.

“The work of the United States and Israel in pursuit of peace, security, and democratic progress is never done,” wrote Obama, “but your leadership on behalf of unity and democracy within Israel and partnership abroad set a positive example for those who will follow in your footsteps.”

The missive could be understood as a swipe at former prime minister Benjamin Netanyahu, who was in office during nearly all of Rivlin’s term and whom Obama has accused of potentially undermining Israel’s democratic traditions.

“Congratulations on a remarkable career and thanks for your friendship over the years,” Obama said in the letter. “You have always been a staunch supporter of the close friendship between the United States and Israel, and during my time as President I could always count on you as a source of advice and partnership.”

He recalled Rivlin’s 2015 visit and lighting Chanukah candles together.

Isaac Herzog was set to take office on Wednesday as Israel’s 11th president after a day of ceremonies with the outgoing Rivlin.

Palestinian Authority President Mahmoud Abbas called Rivlin to express his hope that peace would be made between the two sides.

Charles, Prince of Wales, thanked Rivlin for “all you have done to ensure that the relationship between our two countries has developed in so many ways, especially in the fields of technology and scientific collaboration, during your time in office.”

“I have also greatly appreciated the chance to speak honestly to each other as friends, including on the most complex of issues,” the British crown prince added.

Other royals also wrote to Rivlin.

In his letter, King Felipe V of Spain recounted their participation in the Global Leaders’ Forum on the 75th anniversary of the liberation of Auschwitz.

He wished Rivlin “all the best in your future endeavours – derech tzlacha.” 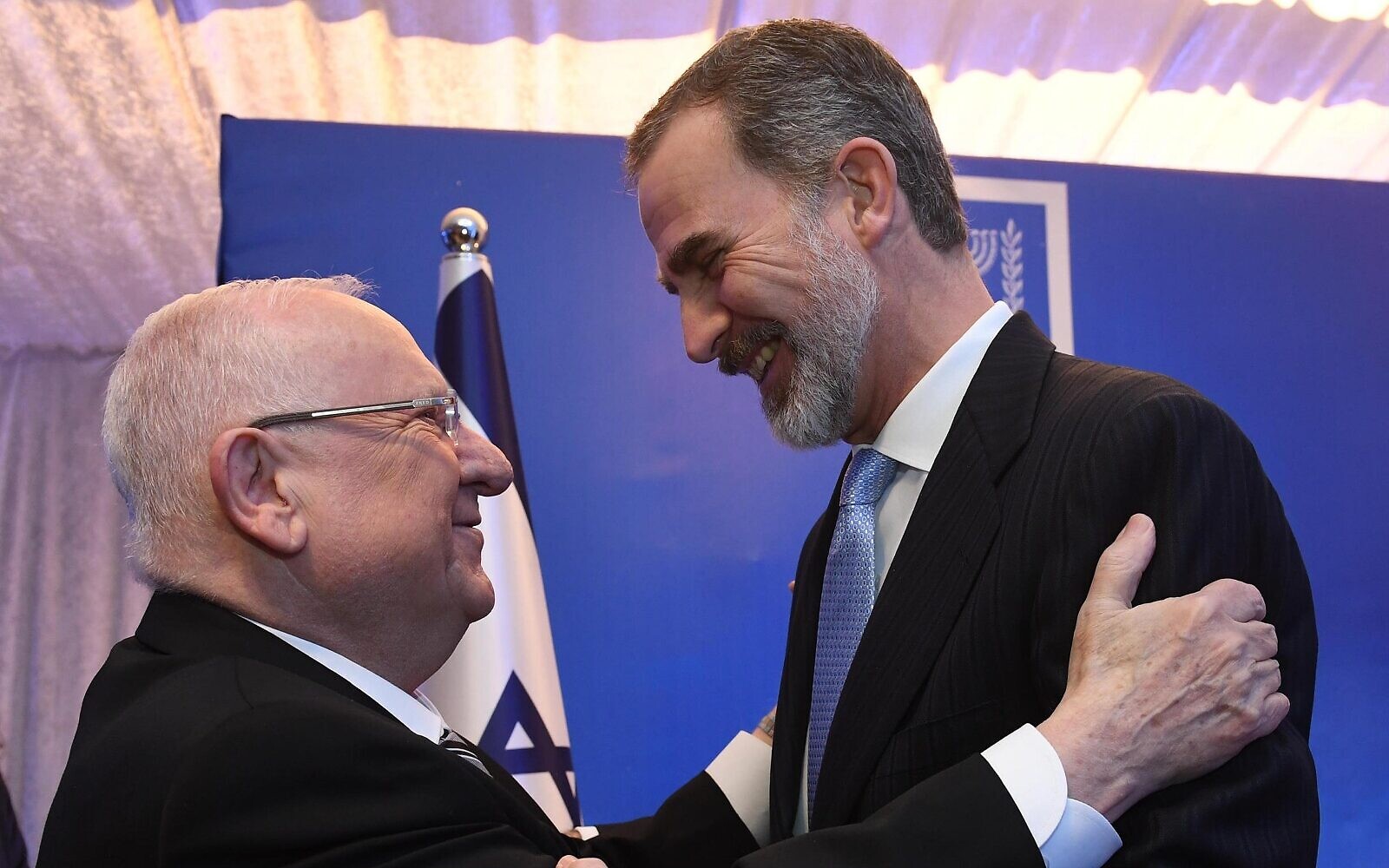 Philippe, King of the Belgians, wrote that he shares “the key priority of developing inclusive societies. The repeated calls you made in this regard throughout your term of office are universal messages advocating for a world of peace and harmony.”

Wednesday’s events started with the official unveiling of a bust of Rivlin in the statue garden of the president’s official residence. The sculpture was erected Monday alongside those of Rivlin’s predecessors, two days before he completed his seven-year term. 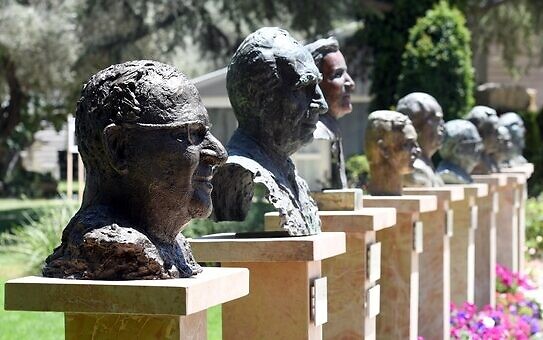 A bust of President Reuven Rivlin by artist Sigalit Landau seen in the Avenue of the Presidents, at the President’s Residence, on July 5, 2021. (Haim Zach/ GPO)

During his term in office, Rivlin consistently scored high in public approval ratings, with a determination to represent the broad spectrum of Israeli communities and his obvious compassion resonating with the public.

In the afternoon, Herzog was set to take his oath of office in the Knesset. He will be sworn in on a 107-year-old Bible that has a long history in his family — the same one that his father, Chaim Herzog, used when he was sworn in as president in 1983. The Bible survived both world wars and was given to his grandmother by her father on the eve of her wedding.

The new president will then address the Knesset plenum. In his speech, Herzog is expected to speak of the rifts and polarization in Israeli society, ways to repair the divides, and the tools needed to preserve Israel’s democracy, the Ynet news site reported Wednesday.

Following a toast to the president at the Knesset, Herzog will head over to the President’s Residence, where there will be a handover ceremony with Rivlin.

Waiting for Herzog on his desk in the president’s office will be a personal letter from Rivlin, addressed to “the president.”

“The truth is I am a little envious of you. In a short time you will discover the tremendous privilege that has fallen to you,” Rivlin wrote in the missive.

“In the coming seven years you will meet the men and women who are citizens of Israel. I am already telling you, you will want to hug them, all of them. You will want to cry with them, and to laugh with them. To be excited with them,” Rivlin wrote. 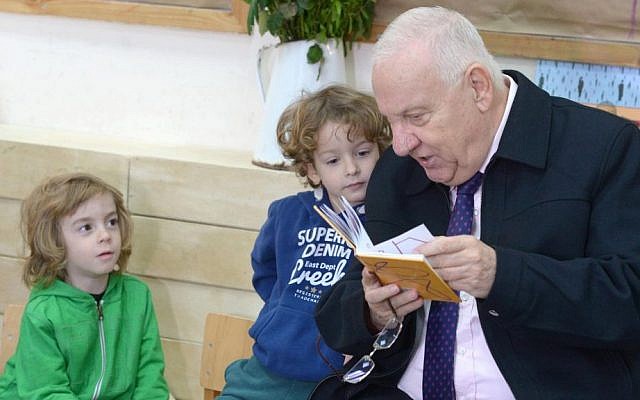 President Reuven Rivlin reading a book to the children at Hadas Kindergarten, on January 3, 2016. (Mark Neyman/GPO)

Echoing themes he expressed in a 2015 speech warning against the deterioration of unity in Israeli society, Rivlin wrote: “Among the tribes, in the shadow of the controversies and rifts, you will find brave people who do not talk about the ‘together,’ they just live it. Day to day and hour by hour. In their homes, those on the right and the left, Jews and Arabs, veteran [citizens] and new immigrants, religious and traditional, young and old. People of all faiths, sectors and ethnicities. All of them, Israelis. Beautiful, enlightening, and generous. And what a heart they have, beyond words.”

Rivlin warned his successor of the emotional toll too, recalling how his sleep was sometimes disturbed by thoughts of those he met who were facing challenges in one form or another.

“You will be surprised. Fall in love. Be proud. Take things to heart,” Rivlin wrote.

“Many times, on journeys, in meetings, I thought to myself the title ‘Citizen Number One’ was born simply because this is the number one people. Today I am sure,” Rivlin concluded.

Herzog, a former Jewish Agency chairman and Labor party leader, won more votes in the Knesset in the election in early June than any presidential candidate in the country’s history.

Ahead of the ceremony, Herzog prayed at the Western Wall on Tuesday and left a note in the cracks, writing that he will devote himself to “unity among our people and true love for Israel.” 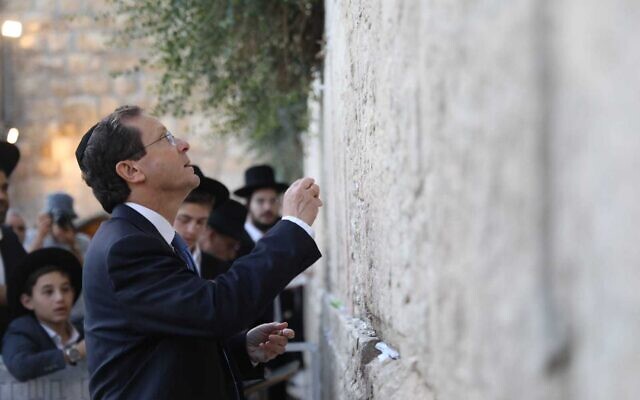 Herzog was elected on June 2 by 87 of the Knesset’s 120 members as 11th president of Israel, a largely ceremonial post. Miriam Peretz, a social activist and Israel Prize-winning educator who lost two soldier sons in Israel’s wars, was backed by 26 lawmakers in the secret ballot.

An attorney by profession at one of the country’s top firms (which was founded by his father), Herzog has a family history that is as close as one comes to Israeli royalty.

He is the grandson of Israel’s first Ashkenazi chief rabbi, Isaac Herzog, for whom he is named, and the son of former IDF major general and then president Chaim Herzog. His brother Michael is a retired IDF brigadier general. His aunt Suzy was the wife of former foreign minister Abba Eban.