Israeli officials are said set to weigh reinstating some virus restrictions as the highly contagious COVID-19 Delta variant continues to spread in the country. The recently renewed coronavirus cabinet is expected to meet this week to consider the country’s next steps.

The cabinet last met on Sunday to discuss increased testing and enforcement on Israel’s borders, but did not add any major new restrictions on the public after the indoor mask mandate was reintroduced last Friday.

Former Health Ministry deputy director-general Itamar Grotto said the country should consider returning to the “Green Pass” system that differentiates between vaccinated and non-vaccinated citizens regarding access to certain venues and activities.

“We have all tools that we did not have before, including the number of tests and the face masks… and the vaccines. All of these together, and the additional step of reimposing the Green Pass system, should be considered,” Grotto told Channel 13 on Saturday.

The program, which ended on June 1, allowed those vaccinated or recovered from the coronavirus to dine indoors at restaurants and attend cultural events.

Reports suggest that officials have been considering implementing such a move among other maneuvers, such as restrictions on gatherings.

While the rate of infection currently appears to be rising in a similiar manner to previous waves, serious cases requiring hospitalizations are spiking much more slowly.

Illustrative image: A woman shows her green pass as she arrives to watch a theater at the Khan theater in Jerusalem on February 23, 2021. (Yonatan Sindel/Flash90)

Ran Balicer, an epidemiologist who directs health policy planning at Clalit, said that despite the rate of hospitalizations increasing slower than expected, it should still be closely monitored.

The spike in cases, blamed on the ultra-infectious Delta variant, comes as Israel races to vaccinate its preteens and teenagers aged 12-15, with nearly 10,000 first-shot immunizations administered Friday.

Prime Minister Naftali Bennett appealed to young teens on Sunday to get vaccinated in order to avert restrictions, and declared: “We do not want to impose any limits — not on parties, or on trips, or on anything.”

Israel has a reported 1.4 million doses set to expire at the end of July and Bennett is hoping to use as many of them as possible by getting 300,000 children vaccinated by July 9, leaving enough time for a second dose.

According to a Channel 12 report Wednesday night, to prevent vaccines from being tossed, Israel is in advanced talks with the UK to give it millions of Pfizer vaccines within days in return for London supplying it with one of its future shipments from Pfizer at a later date.

Israel purchased millions of vaccines from Pfizer and was among the first countries to receive them, for an undisclosed amount. Despite having millions of unused doses, it inked a deal in April under former prime minister Benjamin Netanyahu for 18 million more doses, in case they are needed for booster shots. 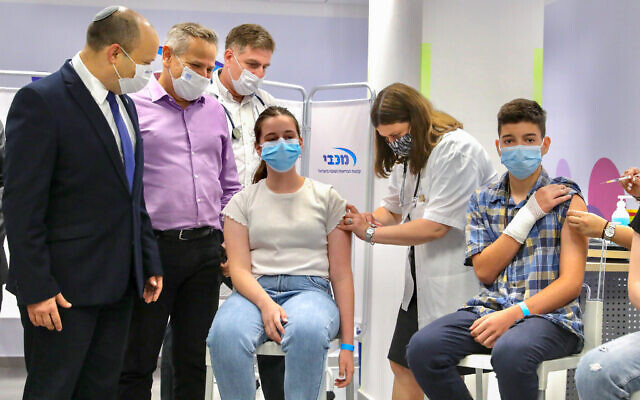 Health Ministry figures on Saturday showed that 460 new coronavirus cases were confirmed this weekend. The figure included 323 recorded Friday and another 137 since midnight Saturday.

The infections bring the number of active cases to 2,398. Friday’s figures were the highest since April 6.

Patients in serious condition with COVID-19 complications went up slightly to 31, as of Saturday. The death toll remains at 6,429, with only one fatality recorded in the past two weeks.

The ministry said the positive test rate for both Saturday and Friday was at 0.5 percent, similar to the preceding few days. Over 69,000 tests were conducted Friday.

Despite the rise in cases, the positivity rate in recent weeks is still significantly lower than January’s near 10% rate during the so-called third virus wave.

The Health Ministry expects daily coronavirus diagnoses to jump to 500-600 next week, according to media reports Wednesday.

According to the ministry, over 5.62 million people — out of Israel’s population of more than 9.3 million — have gotten at least one vaccine shot. Of those, close to 5.2 million received a second dose.