The veteran left-winger Corbyn had been suspended since last month for underplaying the extent of the problem in the party on his watch, despite a damning recent report.

But Starmer has now triggered more factional in-fighting by refusing to readmit him to Labour’s parliamentary ranks, polarizing opinion among members.

The internal row comes as Starmer tries to draw a line under the culture of anti-Semitism in Labour, and make his party more presentable to the electorate, with Prime Minister Boris Johnson under pressure because of his coronavirus response.

Members of the Jewish community hold a protest against Britain’s then opposition Labour party leader Jeremy Corbyn and anti-Semitism in the Labour Party, outside the British Houses of Parliament in central London, on March 26, 2018. (AFP Photo/Tolga Akmen)

Jewish members and lawmakers left Labour in droves under Corbyn as criticism of Israel and Zionism veered into toxic anti-Semitism, as detailed in a landmark report last month by the UK’s Equality and Human Rights Commission (EHRC).

Starmer vowed action after the EHRC found that Labour under Corbyn had broken the law in its “inexcusable” handling of anti-Semitism complaints. The ex-leader was suspended after insisting the report had exaggerated the scale of the problem.

But in a surprise decision taken less than three weeks after the suspension, a five-member panel of Labour officials decided Tuesday to restore Corbyn’s membership, after he issued a more contrite statement.

Starmer stressed that regardless of that decision, taken independently of his office, the party “whip” remained withdrawn for Corbyn, meaning he cannot sit with other Labour MPs in parliament.

“The disciplinary process does not have the confidence of the Jewish community. That became clear once again yesterday,” the former human rights lawyer said on Twitter.

Since I was elected Labour leader, I have made it my mission to root out antisemitism from the Labour Party.

I know that I will judged on my actions, not my words.

Starmer said he would “fix what I have inherited”, accusing Corbyn of having “undermined and set back our work” of restoring faith with the Jewish community.

“Since I was elected Labour leader, I have made it my mission to root out anti-Semitism from the Labour Party. I know that I will judged on my actions, not my words,” he said.

There was no immediate comment from Corbyn but he tweeted on Tuesday: “Our movement must now come together to oppose and defeat this deeply damaging Conservative government.”

His supporters went from jubilation at the restoration of his membership to fury at Starmer’s announcement.

Corbyn was propelled from the backbenches to become Labour leader in 2015 after decades of socialist activism, including for Palestinian causes.

In evidence to the EHRC, Jewish Labour members detailed torrents of anti-Semitic abuse online and in party meetings during his leadership, including death threats at the hands of left-wingers. 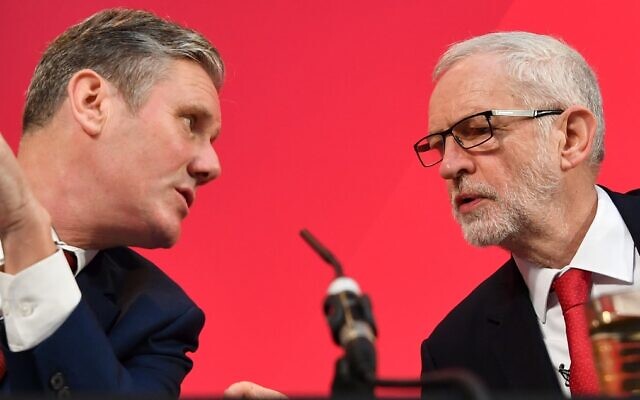 But she said restoring his membership “has caused untold hurt and anguish across the Jewish community” and made her question her own place in the party.

Starmer spoke to Hodge on Tuesday evening, according to his spokesman. He declined to divulge what was said, but her departure would rock Starmer’s project to detoxify Labour, which has been out of power since 2010.

The campaign group Labour Against Antisemitism also welcomed the block on Corbyn in parliament but said restoring his membership “ignored and failed” the Jewish community.

“Until an independent complaints process is introduced, and all historical cases of anti-Semitism from 2015 onwards are reviewed in full, the Labour party will not be a safe space for British Jews,” said spokeswoman Fiona Sharpe.

A new complaints process will be ready in the new year, Starmer’s spokesman said.