TOKYO — The show director for the Tokyo Olympics opening ceremony has been fired on the eve of the event over a decades-old skit referencing the Holocaust, in the latest blow for organizers of the pandemic-delayed Games.

Kentaro Kobayashi’s comments in a video of a comedy sketch from 1998 emerged online overnight and sparked shock from some in Japan.

“It came to light that during a past performance, (he) used language that mocked a tragic fact of history,” Tokyo 2020 chief Seiko Hashimoto told reporters.

“The organizing committee has decided to relieve Kobayashi of his post,” she added.

In the sketch, Kobayashi and a comedy partner pretend to be a pair of famous children’s TV entertainers.

As they brainstorm an activity involving paper, Kobayashi refers to some paper doll cutouts, describing them as “the ones from that time you said ‘let’s play the Holocaust,” sparking laughter from the audience.

The pair then joke about how a television producer was angered by the suggestion of a Holocaust activity.

People take pictures of the countdown clock indicating 1 day and 9 hours prior to the start of the opening ceremony of Tokyo 2020 Olympic Games, outside Tokyo station in Tokyo on July 22, 2021. (Charly TRIBALLEAU / AFP)

In a statement, Kobayashi apologized, describing the skit as containing “extremely inappropriate” lines.

“It was from a time when I was not able to get laughs the way I wanted, and I believe I was trying to grab people’s attention in a shallow-minded way.”

Kobayashi, a well-known figure in theater in Japan, is the latest member of the opening ceremony team to depart in disgrace.

The creative director for the opening and closing ceremonies, Hiroshi Sasaki, resigned in March after suggesting a plus-size female comedian appear as a pig. 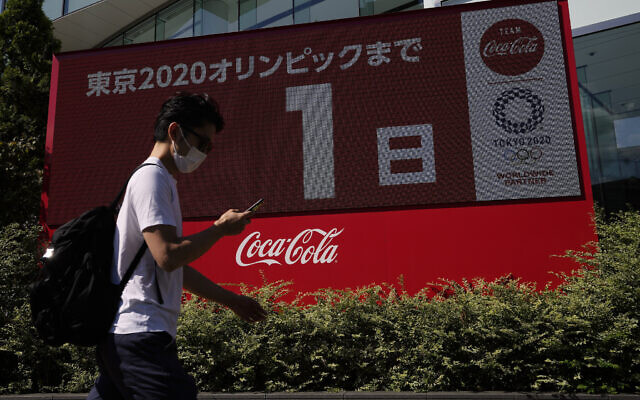 A pedestrian passes by a large electronic display shows one day until the opening ceremony of 2020 Tokyo Olympics, July 22, 2021, in Tokyo. (AP Photo/Kiichiro Sato)

And on Monday, a composer for the ceremony stepped down following an outcry over old interviews in which he described abusing disabled schoolmates.

A four-minute musical piece he composed was removed from the ceremony, but organizers left it unclear Thursday how Kobayashi’s firing might affect the event.

“I want to reach a conclusion as quickly as possible.”

Details of the opening ceremony have been kept under wraps, and strict coronavirus rules mean only around 950 people will be in the stands of the 68,000-capacity Olympic Stadium for the extravaganza.

Tokyo 2020 has been plagued by a series of gaffes and missteps by Olympic officials, including Hashimoto’s predecessor Yoshiro Mori, who resigned after claiming women speak too much in meetings.