Israel’s response to the first three waves of the coronavirus pandemic was marred by under-preparation, the sidelining of experts, a lack of a clear decision-making process, a failure to learn from mistakes and vast discrepancies in nationwide enforcement of government decisions, according to a scathing new report by the state comptroller.

The report, released on Tuesday, covers the outbreaks that took place under the watch of Israel’s 34th and 35th governments under then-prime minister Benjamin Netanyahu, and does not address the response of current Prime Minister Naftali Bennett’s government to the latest outbreak.

It also does not address Israel’s world-beating vaccination drive initiated by Netanyahu.

State Comptroller Matanyahu Englman said on Tuesday that the “significant shortcomings” uncovered by the report were “more relevant than ever” given the ongoing battle with the virus.

“We are now in the fourth wave and it is important to correct the shortcomings immediately,” Englman said.

While the report criticizes a range of issues relating to efforts to prevent the spread of the virus, Englman, a Netanyahu appointee, saves some of his harshest criticism for the overall mechanism under which decisions were made, saying a number of key rulings were made by the former premier without full cabinet approval or proper oversight.

Then-prime minister Benjamin Netanyahu, left, chairs an emergency meeting of senior ministers to decide on measures to curb the spread of the coronavirus, on July 16, 2020. (Chaim Tzach/GPO)

“Defects were found in the process of making decisions and implementing them,” the report says.

According to Englman, there was no proper procedure in place to supervise and monitor the decisions made by Netanyahu and his government, and no process was put in place by the National Security Council or Health Ministry to learn lessons at a national level.

The report charges that numerous decisions — such as on purchasing ventilators and when and how to exit the first lockdown — were not deliberated by the government but made in “different forums led by the prime minister.”

Citing cabinet protocols from early 2020 that were made available to the comptroller but remain barred from publication, the report says that Netanyahu presented ministers with handpicked forecasts for infections and deaths — which supported his own position on implementing harsh measures to stop the initial spread — and failed to address a range of issues created by the virus.

It wasn’t until June 2020, four months after the first coronavirus patient was diagnosed in Israel, that the government held any discussion on the impact of the virus on the economy, education or welfare systems.

The report also criticizes the fact that the coronavirus cabinet, a select panel of ministers tasked with forming virus policy, wasn’t given authority to make decisions on behalf of the government until the second wave in June 2020. Until then, government approval was required for every decision, which slowed down the handling of the crisis, it said.

Engelman also notes that the appointment of a coronavirus czar to oversee government policy on the pandemic was delayed for four months amid political disagreements.

The comptroller specifically scolded the government for failing to convene the coronavirus cabinet at all during July and August last year, saying that the break in meetings “hurt the adoption of the traffic light system [for rating cities based on infection rates] and led to the second lockdown in September 2020.”

Among the specific policy issues addressed by the comptroller, the report describes home quarantine for travelers arriving from abroad as “inefficient” in both compliance and enforcement.

It describes the furlough program created by the government to compensate workers who were unable to work as a “failure,” saying that there was confusing information put out about who was eligible, vast delays in getting the money to those who did qualify, and that it ultimately had “the opposite effect of what was intended” and encouraged people to remain out of work after the crisis had abated.

Additionally, Englman decries the way restrictions were enforced, arguing that “there was no congruence between the places in which there was an outbreak of the coronavirus and enforcement in these places.”

He notes that the number of fines issued in Jerusalem and Bnei Brak — both of which have large ultra-Orthodox populations — “did not correlate to the high levels of morbidity.” 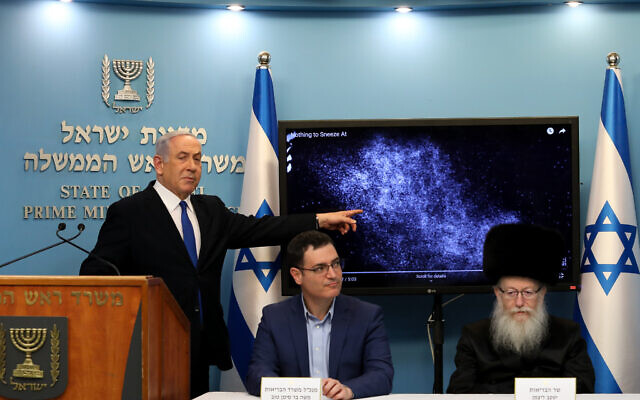 Netanyahu, who is closely allied with the Haredi Shas and United Torah Judaism parties, faced criticism during the pandemic for allegedly not ordering more stringent enforcement of COVID rules in ultra-Orthodox areas with high infection rates.

Citing figures showing that Israeli schools operated for fewer days since the start of the pandemic than in most countries in the world, Engleman slammed the “dire situation” faced by Israeli schoolchildren, which he said was caused by “a severe lack of focus on educational institutions and the impact the virus has had on them.”

The report also criticizes the roll-out of distance learning methods across the country, saying that without proper planning, the initiative “increased the inequality that exists in the education system.”

In a particularly harsh condemnation of decision-makers, Engleman concludes his report with a critique of what he describes as the Netanyahu government’s “apparent inability to learn from the experience of the virus and implement improvements before each new wave of infection.”