One of the last remaining survivors of the Warsaw Ghetto passed away on Tuesday at the age of 96, due to complications from the coronavirus.

Shalom Stamberg was born in Warsaw in 1924 and was moved to the city’s Ghetto with his family when he was 14. He was later transferred to five different concentration camps, including Dachau, Buchenwald and Auschwitz, and survived Nazi death marches as well. He managed to survive due to his electrical skills, thanks to which he received the status of an essential worker at the various camps where he was held.

He was released from Dachau in 1945 at the end of the war. His entire family had perished.

In testimony shared with the Ynet news site in 2019, Stamberg recalled how one of his jobs in the camps had been to count the number of dead. “The bodies were thrown near the crematorium, and we had to count and write down how many there were. We stood for a few hours, and then the kapos (prisoner supervisors) came and punched us with brass knuckles. We were just a joke for them.”

“I was hungry, I was in pain, I was everything, but I stayed alive. It’s not that I was a hero. I was like everyone else. A child,” Stamberg said.

Holocaust survivor Shalom Stamberg holds a book with a photo of himself in Auschwitz just before the start of an annual Holocaust memorial ceremony, held outside this year because of the coronavirus, in the northern Israeli city of Haifa, Israel, on Tuesday, April 21, 2020. (AP Photo/Ariel Schalit)

“After the Holocaust I was left alone in life, without anyone. I had no one to talk to, no one to be with. I was a lonely person in the world who had no degree. I’d finished four grades by the time the war broke out. To this day I miss the family I had then. Since I immigrated [to Israel], I have memorial candles lit in their memory day and night.”

Stamberg immigrated to Israel in 1948 and was among the founders of the northern town of Beit She’an.

He was bar mitzvahed in a special ceremony at the age of 93 after having been unable to hold the ceremony as a child.

Stamberg is survived by his wife Zelda, his two daughters Esther and Chaya, seven grandchildren and eight great-grandchildren.

In a statement eulogizing their father, Esther and Chaya said that he had been vaccinated three times and that they were not sure how he had contracted the coronavirus, as he had been largely keeping to himself since the pandemic began.

“Dad survived the great difficulties that exist in this world, including the hell of the Nazis, but unfortunately the coronavirus overcame him,” they said. 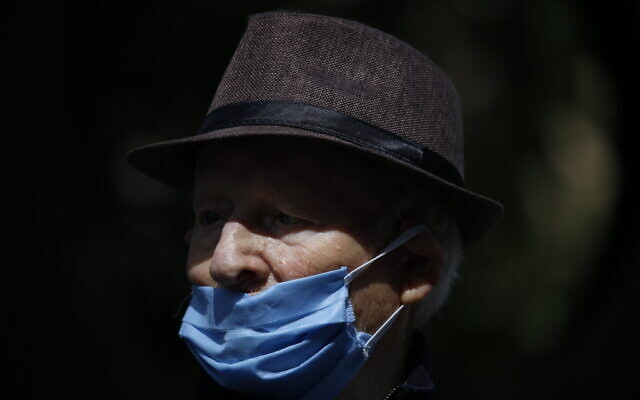 Holocaust survivor Shalom Stamberg wears a mask and keeps a safe distance from others while attending an annual Holocaust memorial ceremony held outside this year because of the coronavirus, in the northern Israeli city of Haifa, Israel, on Tuesday, April 21, 2020. (AP Photo/Ariel Schalit)