If Prime Minister Benjamin Netanyahu fails to form a government, the so-called Change Bloc of opposition parties will try and persuade President Reuven Rivlin to give the mandate to Yamina leader Naftali Bennett, Channel 13 reported on Friday.

Sources in the bloc, who have vowed not to join forces with Netanyahu, told the TV that they feared that if Rivlin does not give the opposition a chance and sends the mandate back to the Knesset, it will become impossible to reach a consensus.

It was not clear from the report if the thinking was unanimous among the varied parties that have vowed not to sit with Netanyahu. Bennett, who has just seven seats, has placed himself in the kingmaker position, indicating he will sit with either side in an effort to avert a 5th election in two years. However, even with Yamina’s support, neither side has a clear majority.

Meanwhile, Channel 12 reported that Yesh Atid leader Yair Lapid, who has just returned from the US where he held talks with political advisers, intends to soon call a press conference where he would call for the Change Bloc to form a government. Yesh Atid is largest party in the bloc.

The report said that Lapid intends to highlight that it would be a government of national unity, including right-wing parties like Yamina, Avigdor Liberman’s Yisrael Beytenu, Gideon Sa’ar’s New hope, along with the centrist Yesh Atid, Benny Gant’s Blue and White, and the leftist Labor and Meretz.

The report did not say if he would demand to lead the bloc or support Bennett. Previous reports have said that Lapid has offered Bennett to go first in a rotation agreement.

The reports come with Netanyahu struggling to form a government.

If Netanyahu does not succeed by May 4 and Rivlin does not grant him an extension, the latter can either task a second person with the attempt (for another period of 28 days and a possible additional 14), or send the mandate back to the Knesset, giving the legislature 21 days to agree on a candidate supported by 61 MKs.

Rivlin has indicated that he may not give the mandate to a second candidate if Netanyahu fails, but rather immediately send it back to the Knesset. He also appears unlikely to grant an extension to Netanyahu before doing so. 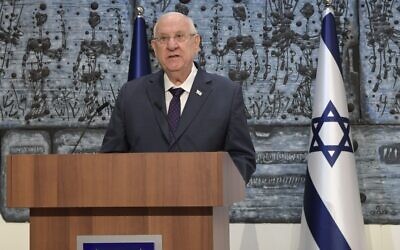 Reuven Rivlin announces his decision to name Benjamin Netanyahu to try to form a government on April 6, 2021. (Koby Gideon/GPO)

With Netanyahu lacking a clear majority following the March 23 election, multiple — and mostly improbable — scenarios have been floated on how to reach the magic number of 61, including relying on outside support from the Islamist Ra’am, despite opposition from far-right lawmakers including Bezalel Smotrich; trying to recruit “defectors” from other parties; and trying to get the New Hope party to join such a coalition.

Earlier Friday, he called upon Sa’ar, a longtime political rival, to join a coalition with Likud in order to allow the formation of a right-wing government.

“This is your home, you will be welcomed with open arms,” Netanyahu wrote to Sa’ar.

Sa’ar, a former Likud minister, campaigned on a pledge not to join a government led by the incumbent prime minister and has so far rebuffed Netanyahu’s appeals to scrap the promise.

“Likud is your home. You grew up in this home. This is not the time to form a left-wing government,” Netanyahu said in his appeal to the New Hope leader.

Channel 13 reported that Netanyahu was now willing to offer Sa’ar several lucrative posts for his party, including deputy prime minister and Speaker of the Knesset.

The report said that Netanyahu had resisted doing so until now because he feared it would be perceived as rewarding challenges from within the Likud, but now recognized he had no choice. 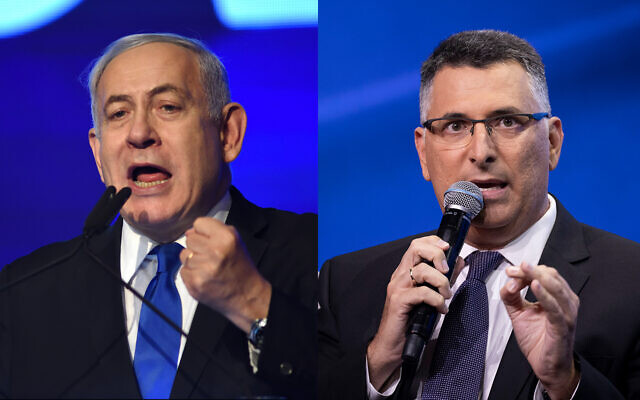 Sa’ar reportedly responded with skepticism to the offer saying: “You have to open your hands before you strangle somebody.”

The TV report said Netanyahu, fearing that Bennett would be tempted to head a Change Bloc government, was trying to get him to pledge to either go with Netanyahu or new elections.

Bennett has said he prefers a right-wing government, but would not go to a new vote if possible.

Even with Bennett and Smotrich, Netanyahu would still be two Knesset seats short of a majority in parliament. He would thus need support either from someone like Sa’ar (an improbable scenario) or the tacit backing of the Islamist Ra’am party from outside the coalition — a move Ra’am has indicated it would be amenable to, in return for clear gains for his constituents.

But Religious Zionism has repeatedly ruled out the latter scenario, and Smotrich reiterated on Friday his rejection of Ra’am, saying that he “will not give in to the suicide of the right” that would establish a government “dependant on anti-Zionist terrorism supporters, and make us all hostages.”

He also said that “if Likud fails to form a national government, it will be because [Netanyahu] has wasted the precious days of his mandate heading in dangerous and utterly hopeless directions.”

Channel 13 said Netanyahu was trying to convince Smotrich to accept Ra’am’s support for a one-off vote that would allow the establishment of the government, but this appeared unlikely given Smotrich’s strong views on the issue. 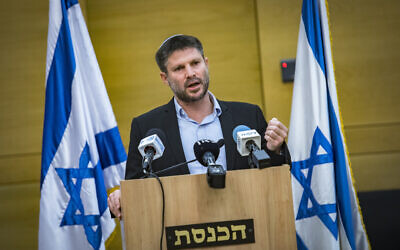 Head of the Religious Zionism party, Bezalel Smotrich gives a press statement in the Knesset in Jerusalem, on April 4, 2021. (Olivier FItoussi/Flash90)

On Wednesday, Smotrich called upon Netanyahu and Sa’ar, to “sort out their differences” in order to establish a new government.

“If you do not know how to get along with each other, the decision will go to your enemies, the supporters of terrorism, who deny the existence of the State of Israel as a Jewish state,” Smotrich wrote to them both, apparently referring to Ra’am and the Joint List.