The Health Ministry said Sunday morning that the number of active coronavirus cases in the country crossed the 50,000 threshold, as over 600,000 students in high infection areas were set to stay home and switch to remote learning.

Under the government’s so-called traffic light plan, 600,000 students in grades 5-12 in areas designated red or orange will cease in-person learning.

Education Minister Yoav Gallant was expected to ask ministers to exempt students in grades 11-12 from the regulation so that they can continue attending class ahead of matriculation, the Kan public broadcaster reported.

The teachers union called on Sunday for parents to keep children home if possible, saying the “education minister is abandoning the safety of 200,000 teaching staff and their families.” There have been growing demands in recent weeks for teachers and daycare staff to be prioritized for vaccinations as schools stayed open despite the steady rise in infections.

The Ynet news site reported that serious outbreaks of the coronavirus were being seen in a number of yeshivas, or seminaries, two weeks after students returned from the Hanukkah vacation.

According to the report, an internal Health Ministry document revealed that verified patients at a number of yeshivas and boarding schools weren’t being separated from the rest of the students, leading to clusters of infection.

The report said that even institutions that previously had a good record on maintaining the regulations that saw students divided into smaller, set pods, were starting to see wider outbreaks.

On Sunday morning, the Health Ministry said 3,977 new coronavirus cases were confirmed the previous day — case numbers tend to see a drop at the weekend when testing rates are lower.

Along with 224 cases recorded since midnight, the number of infections in Israel since the pandemic began rose to 435,866. 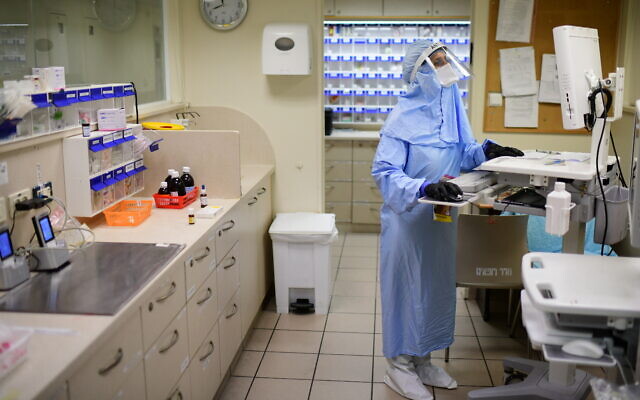 There were 50,299 active cases, including 729 people in serious condition, with 179 of them on ventilators. Another 211 patients were in moderate condition and the rest had mild or no symptoms.

Of the 74,901 tests performed Saturday, 5.3 percent came back positive.

Meanwhile Health Minister Yuli Edelstein said on Sunday that 1,090,000 Israelis had already received their first dose of the coronavirus vaccine, equivalent to some 11 percent of its population — far and away the world leader in vaccinations per capita.

However even as Israel’s vaccination program galloped ahead, Channel 12 News reported that Israeli healthcare providers will start notifying thousands of Israelis that their appointments to receive the first dose of coronavirus vaccine are being delayed, amid concerns of an upcoming shortage and a desire to prioritize second doses for those who’ve already received their first injection. 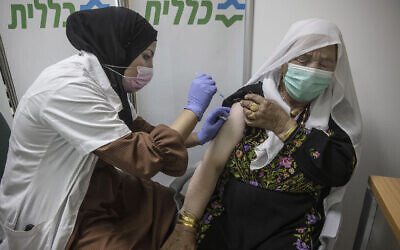 A Bedouin woman receives a Pfizer COVID-19 vaccine at a medical center in the Bedouin local council of Segev Shalom near the city of Beersheba, southern Israel, Dec. 30, 2020. (AP Photo/Tsafrir Abayov)

The mass vaccination drive has so far focused mainly on healthcare workers, those aged over 60, and at-risk groups, but doses are running out, and officials have been planning a slowdown of first-dose inoculations to prevent second doses from drying up. Officials have said there will be no shortage of second doses for those who’ve gotten their first shots.

Meanwhile, Israel is reported to be pressing vaccine-making pharmaceutical companies Pfizer and Moderna to speed up the arrival of shipments to Israel. Channel 12 said Netanyahu spoke again over the weekend with Pfizer CEO Albert Bourla, for what the network said was the 13th time, but that no breakthrough had yet been reached on expediting shipments.

But as case numbers rose, Prime Minister Benjamin Netanyahu was set to hold consultations this week on tightening the national coronavirus lockdown, his office said Saturday.

The talks will focus on imposing a “tight and short lockdown that will allow a quick reopening of the economy,” according to the statement from the Prime Minister’s Office. 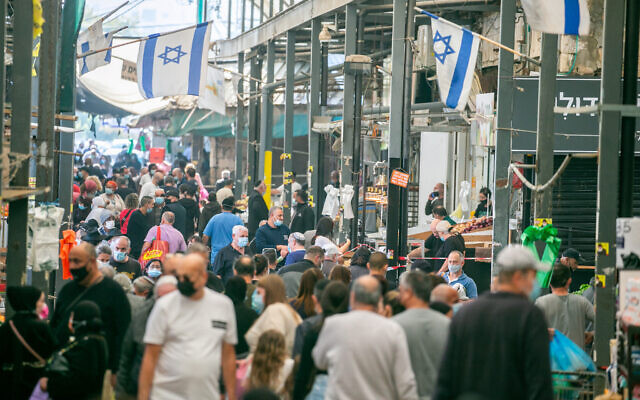 The Health Ministry was demanding a full shutdown of schools, currently operating normally in many areas, and further limitations on businesses, with Edelstein saying Saturday such measures were needed for a two-week period. But it was unclear whether ministers would support the move, with Blue and White signaling it was doubtful further restrictions were useful.

The current lockdown rules bar Israelis from entering another person’s home; restrict movement to one kilometer (six-tenths of a mile) from home, with exceptions, such as for vaccinations; shut down commerce (except for essentials), leisure and entertainment; limit public transportation to 50% capacity; and limit workplaces that do not deal with customers face-to-face to 50% capacity.