Over half of the Holocaust survivors living in Israel require food handouts, with many saying they don’t have the funds to pay for essentials such as eyeglasses and hearing aids, a survey released Wednesday ahead of Holocaust Remembrance Day has found.

In a poll conducted by the Holocaust Survivors’ Welfare Fund, 51 percent of respondents said they relied on food given to them by various charities, with a third saying they were in “dire need” of the assistance.

The number of Holocaust survivors in Israel requiring financial assistance has risen in recent years.

According to a State Comptroller report released in October, there were 51,175 survivors who receive yearly grants — 70% of the total — who require additional financial benefits “to live with dignity,” up from 67% in 2017.

Additionally, the report said that between 2018 and 2019, the Welfare Ministry only disbursed 30% of the NIS 30 million ($8.8 million) set aside for survivors eligible to receive income assistance.

This year’s Holocaust Remembrance Day, which will be marked in Israel on Wednesday evening and Thursday, comes on the back of a year that saw many Holocaust survivors succumb to the coronavirus.

In January, Israel’s Central Bureau of Statistics said that some 900 Holocaust survivors in Israel had died of COVID-19 over the course of the pandemic in 2020. Over the year, some 3,500 Holocaust survivors were known to have contracted the virus, meaning that the reported death rate among survivors was 17 percent, only slightly higher than the 16% death rate seen in the general population for the same age group. 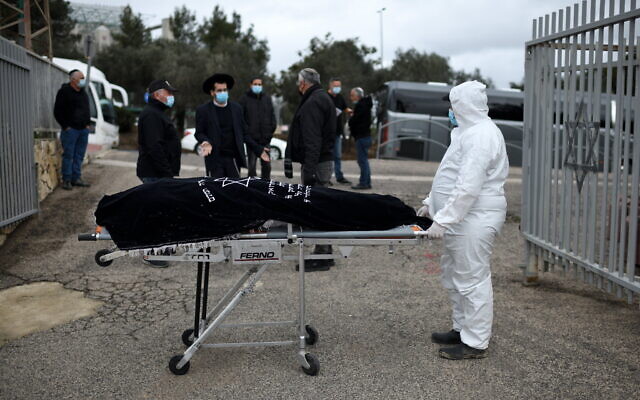 A burial services employee carries the body of Romania-born Holocaust survivor Golda Schwartz, who died at the age of 93 of complications of COVID-19 in Nof Hagalil Cemetery on January 28, 2021 (Gili Yaari / Flash90)

Highlighting the threat to survivors from the coronavirus pandemic, this year’s March of the Living events, paying “special tribute to the medical resistance and heroes of the Holocaust,” will include Pfizer CEO Albert Bourla and US President Joe Biden’s chief medical adviser Dr. Anthony Fauci.

With March of the Living’s annual Holocaust commemoration in Poland canceled for a second year running due to the virus, the organization will instead hold an online symposium featuring Holocaust survivors, medical professionals and researchers discussing “medical resistance during the Holocaust, the legacy of Nazi medicine and what the Holocaust can teach us about the ethics of care.” 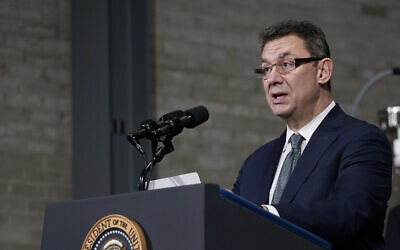 Announcing his participation in the event, Bourla, the son of Holocaust survivors, said in a statement, “My parents talked about it [the Holocaust] a great deal. They did this because they wanted us to remember — to remember the lives that were lost, to remember what can happen when the virus of evil is allowed to spread unchecked. But most important, to remember the value of a human life.”

According to the Central Bureau of Statistics, at the end of 2020, there were 179,600 people defined as Holocaust survivors living in Israel. An additional 3,000 people were recognized as survivors in 2020, while 17,000 died, including the 900 virus victims.

Nearly two-thirds of those, or 64 percent, hail from Europe, while 11% are from Iraq, 16% from Morocco, 4% from Tunisia and 2% each from Algeria and Libya.

Those from the Muslim world fled Nazi-inspired pogroms, such as the 1941 Farhud pogrom in Iraq, or Nazi-controlled or Nazi-allied territories where they faced restrictions on daily life, such as in Vichy-ruled Morocco and Tunisia.

Israeli state agencies define as survivors anyone “exposed” to the Nazi regime, including those who lived in countries conquered by Nazi Germany or were under direct Nazi influence in 1933-1945, as well as refugees who fled those areas due to the Nazis. 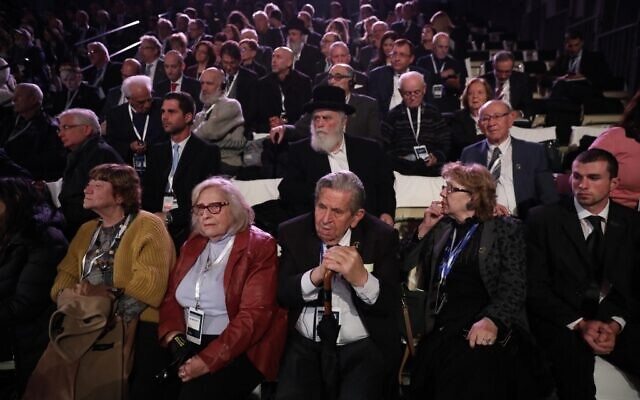 Attendees, including Holocaust survivors, at the Fifth World Holocaust Forum at the Yad Vashem Holocaust memorial museum in Jerusalem on January 23, 2020.(Abir Sultan/Pool/AFP)

About 40% of the survivors had immigrated to Israel by 1951, and more than a third in the last wave of immigration in the 1990s from the former Soviet Union. Just 1.8% of the survivor population, or some 3,200 people, hails from Germany and Austria.

As women generally outlive men, they make up 60% of the survivor population. The percentage of women rises as each cohort ages.