The Palestinian Authority has reportedly sent a letter to Washington stating that all Palestinian factions — including Hamas — have committed to a Palestinian state within the pre-1967 borders with its capital in East Jerusalem, and to peaceful popular resistance against Israel.

The letter was allegedly sent as part of a reconciliation process between the vying groups ahead of scheduled Palestinian elections. Hamas, which avowedly seeks Israel’s destruction, has never publicly withdrawn its commitment to violent resistance against Israel.

Palestinian officials who spoke to The Times of Israel have previously emphasized that Hamas’s participation in the Palestinian political process would depend on its acceptance of previous agreements signed between Israel and the Palestinians, in addition to committing to “peaceful popular resistance.”

“If they don’t agree? They won’t come. We’ll go our separate ways,” senior Fatah official Azzam al-Ahmad said in an interview in Ramallah in January.

But even though election plans have continued apace, Hamas has yet to make any such commitments in a public forum.

Dahlan, who currently resides in the United Arab Emirates, is widely seen as a bitter rival of Palestinian Authority President Mahmoud Abbas. 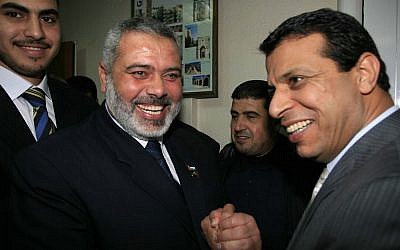 The letter was said to be sent by Palestinian Authority Civil Affairs Minister Hussein al-Sheikh to senior US State Department official Hady Amr, who is responsible for the Israel-Palestine portfolio.

According to the reported letter, Hamas agreed to obey international law and to adhere to a peaceful transfer of power depending on the election results. Hamas reportedly agreed to the program at a meeting of Palestinian faction heads last September.

Abbas issued a decree in mid-January ordering the first Palestinian national elections in more than 15 years.

The long-running rift between Abbas’s Fatah movement and Hamas has thwarted attempts to hold a national vote since Hamas won the most votes in 2006 legislative elections.

A spokesperson for the PA Civil Affairs commission did not immediately respond to a request for comment.

Most observers remain skeptical that elections will actually come to pass this time around, as many promises by Palestinian officials that another vote would be held have fallen through before. After US strike on proxies, Iran calls to name perpetrators of attacks in Iraq