The Palestinian woman shot and killed by Israeli soldiers who believed her to be committing a terror attack suffered from prior mental illness and had recently attempted suicide, her family told The Times of Israel on Monday.

“She began to feel that everything was going wrong, and suddenly, over the last three months, her mental state deteriorated. We were shocked,” Fahima al-Hroub’s brother Ibrahim said in a phone call.

Fahima al-Hroub, a 60-year-old resident of Wadi Fukin near Bethlehem, was shot by Israeli soldiers on Sunday after she approached them brandishing a knife near the Gush Etzion junction.

Al-Hroub was taken to Shaare Zedek Hospital in Jerusalem for treatment, where she died from her wounds.

The Israel Defense Forces deemed the attack an apparent act of terror and blocked the release of al-Hroub’s body. Israel has a controversial policy of holding onto the bodies of alleged terrorists as a form of deterrence.

The Gush Etzion junction has seen numerous attacks by Palestinian terrorists, most recently on January 31, when Israeli soldiers shot dead a Palestinian man who attempted to stab a soldier with a makeshift spear.

Al-Hroub’s family attest that her mental health had deteriorated sharply in recent months. The 60-year-old mother of one had previously attempted to die by suicide.

“She’d had a total nervous collapse and was totally out of control of what she was saying and doing. We took her to doctors for treatment, but she attempted suicide by overdosing on pills,” said Ibrahim.

At a loss for how to deal with her deteriorating mental state, her family brought al-Hroub to a mental health specialist in Bethlehem in mid-April.

“We took her to a psychologist, who diagnosed her with a condition — depression and severe anxiety,” her brother said.

The knife used by a Palestinian woman in an alleged stabbing attempt at the Gush Etzion Junction in the West Bank on May 2 2021. (Israel Defense Forces)

According to a psychiatric report written by the Bethlehem-area specialist, al-Hroub refused to take her medicine. Her brother took her to see the doctor again on May 1, the day before she was shot in the alleged stabbing attack.

“She still refuses… therapy and medication and hope[s] for death and suicide,” the psychiatrist wrote in an English-language affidavit seen by The Times of Israel.

On Sunday morning, al-Hroub approached a group of Israeli soldiers at a junction close to the West Bank settlements of Gush Etzion, brandishing a knife.

Footage of the incident showed al-Hroub continuing to slowly walk toward the soldiers even as they shouted at her repeatedly to stop and fired warning shots in the air.

One of the soldiers shot her in the upper body, and she was taken to Shaare Zedek in critical condition, where she was later pronounced dead, the hospital said. 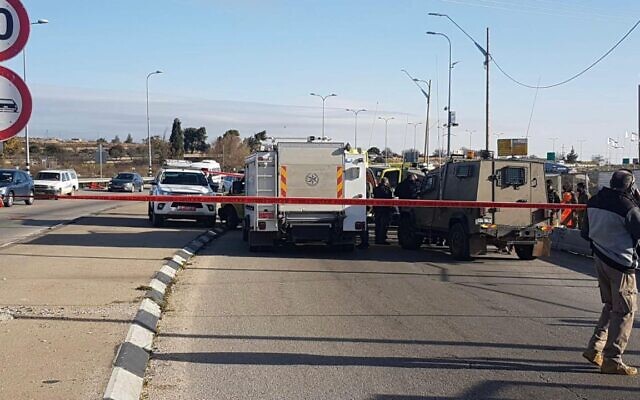 Police and military officials respond to an attempted stabbing attack at the Gush Etzion Junction in the southern West Bank on January 31, 2021. (Screen capture)

According to her brother, al-Hroub’s depressive episodes began quite recently when she was forced to close her previously successful hair salon.

“With the coronavirus and everything, she was eventually forced to shut it down. From three months ago to today, things deteriorated,” Ibrahim said.

After her business closed, al-Hroub began to experience panic attacks and began a downward spiral of blame, according to her brother.

“Everything was fine — our financial situation, everything. We didn’t want for food, nothing. But she started blaming herself, saying there was no money,” Ibrahim said.

Ibrahim said the family was waiting to receive al-Hroub’s body from Israeli authorities so they could begin to grieve.

“They say ‘it is respectful to bury the dead,’” Ibrahim said, invoking a well-known saying of the Muslim prophet Mohammad. “Right now, we’re waiting to do that.”