SILAT Al-DHAHR, West Bank (AP) — More than two weeks after the alleged assault, Tareq Zubeidi still spends most of his time in bed, too scared to leave home even if the wounds on his feet allowed him to walk normally.

The 15-year-old is haunted by the memory of what he describes as a brutal attack by Israeli settlers, who he says beat him with clubs, tied him to a tree and burned the soles of his feet.

“When I sit by myself I start thinking about all of them, and then I start sweating and my heart rate starts to increase,” Zubeidi said.

While there were no witnesses to corroborate Zubeidi’s account, the August 17 incident took place in an area that sees frequent violence between hardline Jewish settlers and local Palestinians.

B’Tselem, an Israeli human rights group that monitors settler violence, said it was not able to verify all the details of Zubeidi’s account but that “it is clear that the boy was physically and mentally abused.”

The group documented at least seven settler attacks on Palestinians and their property in the area around Zubeidi’s village in the last two years. It says that when the Israeli military intervenes, it often sides with the settlers. The Palestinians claim the West Bank, captured by Israel in the 1967 Mideast war, as the main part of a future independent state.

The Israeli military says troops were dispatched to Homesh, a nearby settlement that was forcefully evacuated in 2005, after reports of Palestinians throwing rocks. When the soldiers arrived they found settlers chasing a Palestinian teenager who was later returned to his family, the military said in a statement.

Settler groups with links to Homesh declined to comment or said they were unaware of the incident.

Zubeidi said he and some friends took some snacks up to the hilltop where the settlement once stood and found a place to relax. At around 9:30 a.m. they heard people shouting in Hebrew and looked up to see a small group of settlers coming toward them.

He denied he or his friends threw rocks, saying “I don’t know anything about that.”

Instead, he said, they fearfully ran down the hill toward their village of Silat al-Dhahr. Zubeidi said an earlier knee injury slowed him down, allowing another group of settlers in a car to catch up with him and knock him over as he descended the gravely street that connects Homesh with the main road.

“Four settlers got out of the car and there were two others who were traveling by foot,” he said. “One of them had a gun.”

The settlers beat him with wooden clubs before blindfolding him and tying him to the hood of the car, he said. They drove for about five minutes, back up the hill, before the car came to a sudden halt, sending him tumbling to the ground. “Then they started to hit me, spit on me and swear at me,” he said.

He said the settlers tied him to a tree and whipped him with a belt. Then they took him down, cut his legs with a knife and burned the soles of his feet with a car cigarette lighter. In the end, they hit him over the head with a club, knocking him unconscious, he said. 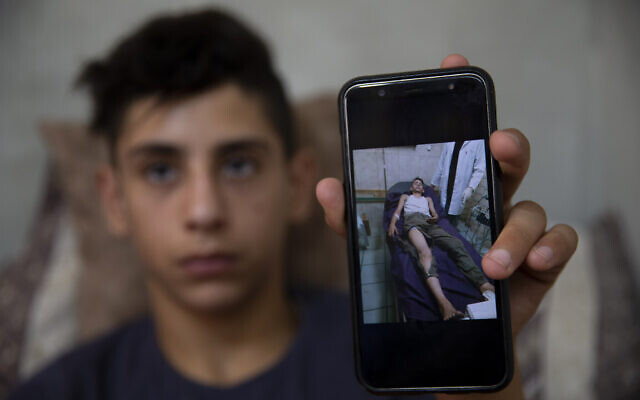 When he came to, he was in an army jeep with an Israeli soldier who he says immediately began threatening him. “He told me that if anything happens in the settlement we will arrest you, and if there is any stone-throwing, you will take full responsibility,” Zubeidi said.

His father, Abdul Razek Zubeidi, said his son was taken to a hospital that afternoon and spent the night there. A medical report said he had bruising on his shoulder and cuts on his feet. Photos taken shortly after the incident appear to show two dark wounds on the soles of his feet.

Abdul Razek Zubeidi said he immediately reported the incident to the Palestinian police, who said they contacted the Israeli army. Abdul Razek said he has heard nothing from Israeli authorities. The family says it has not filed a complaint to Israeli police, fearing it would be a waste of time.

Palestinians in the West Bank live under Israeli military law, giving them few avenues for legal recourse, while the nearly 500,000 Jewish settlers in the territory have full Israeli citizenship.

Homesh was one of four settlements in the West Bank that were evacuated alongside Israel’s withdrawal from the Gaza Strip in 2005. But settlers from another nearby settlement still go the hilltop to study and pray, according to Israeli media. 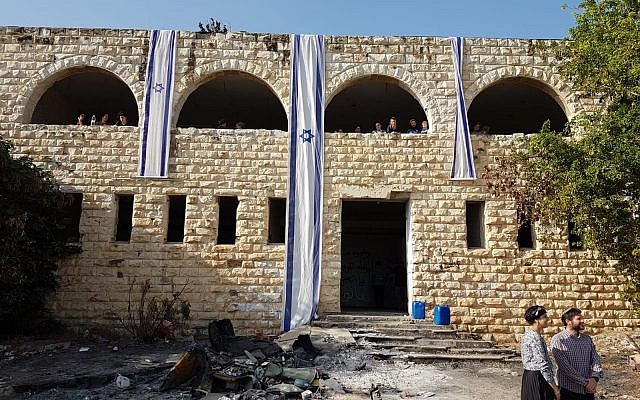 Settlers drape Israeli flags on a building in the evacuated settlement of Sa-Nur on July 24, 2018. (Homesh T’cheela)

In addition to the more than 130 settlements authorized by Israel, there are dozens of unauthorized settlement outposts. Israel is reluctant to evacuate them because doing so risks igniting clashes between settlers and soldiers.

The Palestinians and most of the international community view all settlements as a violation of international law, as well as an obstacle to peace, because they threaten the territorial contiguity and viability of any future Palestinian state.

The UN envoy to the Middle East, Tor Wennesland, raised Zubeidi’s case at a meeting of the Security Council last month, describing the incident as a “heinous act” and calling on Israeli authorities to hold the perpetrators accountable.

The boy’s mother, Hanan Zubeidi, fears it could have been much worse.

“Imagine, my son tells me that he was beaten up by them,” she said. “I did not expect to see him alive.”