Palestinian workers in the West Bank are putting the final touches on a decommissioned Boeing 707 aircraft to ready it for a new kind of takeoff: as a restaurant.

Its enterprising owners, 60-year-old twin brothers Ata and Khamis al-Sairafi, expect to welcome their first customers within weeks at the site in an isolated mountain area near Nablus.

Inside the old jet’s cabin, the seats have been stripped out and the window panes removed. Tables will soon be fitted in the fuselage, which has been painted white with laminate wooden floors.

The brothers plan to call their aviation-themed eatery — which is decorated with Palestinian and Jordanian flags — “the Palestinian-Jordanian Airline Restaurant and Coffee Shop Al-Sairafi Nablus.”

“We will start by providing hookahs,” said Khamis, for people who enjoy smoking tobacco through water pipes, before later expanding the business into an event space. “The cockpit will be a suitable place for any newlyweds who come to us for their wedding ceremony.”

The Sairafi brothers — identical twins who were sporting matching yellow shirts, khaki shorts and red sneakers during AFP’s visit — are known for their interest in unusual initiatives.

The fuselage of a Boeing 707 aircraft being converted by Palestinian twin brothers Atallah and Khamis al-Sairafi into a restaurant near the city of Nablus in the West Bank on July 5, 2021. (Photo by JAAFAR ASHTIYEH / AFP)

Ata said he and his brother were working as scrap metal traders two decades ago when he learned about a 1980s-era passenger plane sitting near Kiryat Shmona in northern Israel.

They purchased it in 1999, even though there was — and still is — no airport in the West Bank, usually forcing residents who want to fly abroad to travel via Jordan.

The brothers negotiated with the Israeli owner, who sold it to them for $100,000, the engines removed.

“After we bought it, we had to move it from Israel … which is a complicated process,” Ata said.

The twins paid an Israeli company $20,000 to move the jet to the West Bank. The brothers said the 13-hour transport was coordinated between the Israeli and Palestinian sides.

Key roads were closed so the plane could be rolled on a giant tow truck, its wings temporarily separated, to its current location.

“Loads of media outlets covered it, and the Israeli police intervened to organize the transfer,” recalled Khamis.

“We received the plane, which dates back to the 1980s, without any equipment that would enable it to fly,” Ata said. 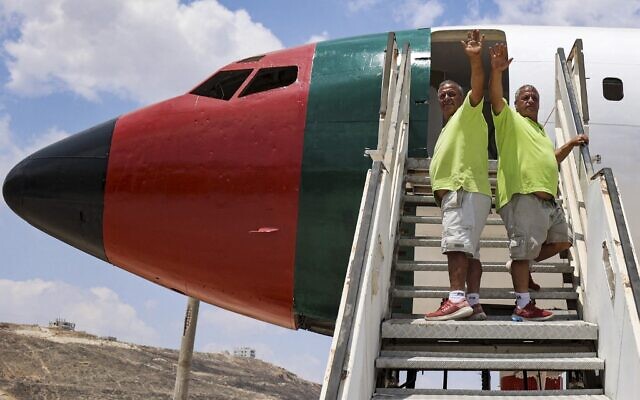 Palestinian twin brothers Atallah and Khamis al-Sairafi, 60, convert a Boeing 707 aircraft into a restaurant near the city of Nablus in the West Bank on July 5, 2021. (Photo by JAAFAR ASHTIYEH / AFP)

The twins said they had hoped to run a restaurant out of the plane since around 2000, but the launch faltered with the outbreak of the second Palestinian intifada, or uprising, which saw numerous terror attacks directed against Israelis.

“The events in the Palestinian territories at that time hindered the completion of our project, and we thought of reviving it two years ago, but the spread of the coronavirus also prevented us from doing so,” Khamis said.

As they returned to their long-delayed passion project, the twins purchased a rickety retired gangway from Ben Gurion Airport, its name still visible in Hebrew and English characters.

The project faces one more, environmental, challenge. The plane sits on property abutting a waste sorting station, which the twins are trying to convince local authorities to move elsewhere.

Ultimately, they said they are hopeful their project will finally take wing after being grounded for nearly a quarter-century.

“Having an aircraft in the Palestinian territories,” said Khamis, “is such a strange idea that I’m sure the project will be a success.”