Two senior Palestinian politicians were skeptical that an Israeli government led by Yamina chief Naftali Bennett would change Palestinian reality for the better in phone calls with The Times of Israel on Monday.

On Monday afternoon, several key members of the opposition to Prime Minister Benjamin Netanyahu announced their commitment to forming a government without him.

Many Palestinians dislike Netanyahu, viewing his 12-year tenure as years that saw their national cause reach a historic nadir.

But Bennett, his immediate potential replacement, is a champion of West Bank settlements widely viewed as even more unlikely to be open to any concessions with the Palestinians.

“On an individual level, there isn’t a great difference between them. Perhaps Bennett would be somewhat more extremist or radical,” said Nasser al-Kidwa, a former Fatah Central Committee member and prominent critic of Palestinian Authority President Mahmoud Abbas.

Under the proposed agreement, Bennett would take the first turn as prime minister in a rotation agreement with Yesh Atid chief Yair Lapid, whose party is the largest in the bloc of parties seeking to topple Netanyahu. The two have yet to come to a final accord, however.

“There are still plenty of obstacles in the way of the formation of the new government,” Lapid acknowledged in remarks to the press.

Mustafa Barghouti, a veteran politician in Ramallah’s opposition who directs the Palestinian National Initiative, said that the only bright spot was that Netanyahu’s corruption cases could go forward without a hitch once the premier stepped down. Netanyahu is currently on trial for bribery, fraud, and breach of trust.

“The only positive matter would be should Netanyahu leave and be prosecuted. But a government with Bennett at its center is worrying for us…this will not be a government capable of making peace,” Barghouti said.

Al-Kidwa agreed for Netanyahu to step aside at last would be a positive development “for the sake of peace and for the region as a whole.”

“But at the same time, we shouldn’t deceive ourselves too much about the future,” al-Kidwa said. “Again, the two of them are basically the same.” 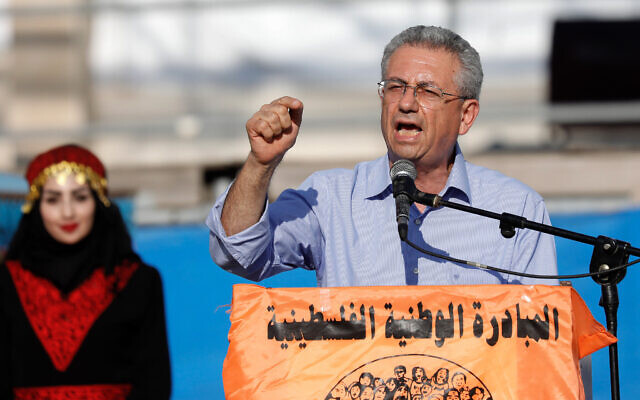 A spokesperson for PA President Abbas could not be reached for comment.

Bennett heads the right-wing Yamina party, which counts West Bank settlers as one of its strongest voter bases. He formerly directed the Yesha Council, a network of settler municipal councils, and has been an outspoken opponent of the land for peace formulation and Palestinian statehood. He has run on platforms that include annexing Area C of the West Bank and giving Palestinians “almost full self-governance” in the rest of the territory.

In a speech announcing his decision to join the change bloc Sunday, he admitted that the coalition’s unwieldy roster of parties would be limited in what it could agree on, though he vowed that “this is not a government that will carry out [settlement] disengagements, nor will it hand over territories.”

Other politicians in the so-called change bloc have also said that their proposed government would be too fragile to deal with controversial issues, such as negotiating a Palestinian state.

“How can such the Palestinian issue be suspended when, ultimately, it’s the most important issue at hand? Fleeing from the problem, the statements we’ve seen from Bennett, all this does not bode well,” said Barghouti.

If either a Netanyahu or a Bennett government comes to pass, however, it will be unprecedented in at least one way: it will rely on the abstention of the conservative Islamist Ra’am party, marking the first time an Arab party has enabled a right-wing premier to take power.

Ra’am leader Mansour Abbas has provoked widespread controversy among Arab Israelis for his willingness to partner with the Jewish Israeli right. The Islamist campaigned on receiving tangible achievements for Arab Israelis in budgets and infrastructure, sharply dividing his constituency.

Nonetheless, Abbas received four mandates in the March vote, effectively ensuring that no government could arise without his support. Ra’am suspended coalition talks during the hostilities between Israel and Hamas, but resumed them again once the fighting subsided.

On Monday night, Hebrew media reported that Abbas had nearly struck a deal with the change bloc. Abbas’s key demands, according to the reports, were for additional budgets for Arab communities and for a 2017 law targeting illegal Arab construction to be annulled.

Barghouti dismissed the idea that Ra’am party leader Mansour Abbas would gain anything by supporting the Israeli right, however.

“I don’t believe his approach will achieve anything for the Palestinians inside Israel. It’s been tried before and it didn’t work. There’s a racist system at work here,” Barghouti said.