Around 100 Palestinians demonstrated outside the Jerusalem District Court on Wednesday to protest the planned eviction of several dozen Palestinian residents from their homes in the East Jerusalem neighborhood of Silwan.

The court said it would issue a decision on a pending appeal against the ordered eviction “soon,” although it is possible that the final ruling will not be handed down for days or weeks.

“The court is currently considering whether or not to involve the Attorney General’s Office in the case,” said Yazid Kawar, a lawyer representing a number of the families.

The Silwan properties are claimed by Jewish Israelis backed by Ateret Cohanim, a right-wing foundation that works to strengthen the Jewish presence in East Jerusalem.

Muslim worshipers, some wearing face masks, attend Friday prayers a protest tent, set up by activists against the demolition of houses by Israeli authorities in the mostly Arab east Jerusalem neighborhood of Silwan, on August 28, 2020 (AHMAD GHARABLI / AFP)

A spokesperson for Ateret Cohanim said the organization does not comment on ongoing court proceedings as a matter of policy.

Several Jewish enclaves now exist within the mostly Arab neighborhood of Silwan. The area is known in Hebrew as the City of David, after a local archaeological site that contains priceless antiquities believed to date back to biblical times.

The eviction of 19 families in Silwan’s Batan al-Hawa section, including the two cases discussed on Wednesday, are currently pending in Israeli courts. A number of Palestinians have appealed to the High Court, although a final decision has yet to be issued.

Two Palestinians were detained by police as officers sought to clear the main thoroughfare in front of the Jerusalem District Court on Wednesday.

“With blood and spirit, we’ll redeem you, Silwan,” protesters called at the police barricade.

The planned evictions in Batan al-Hawa come on the heels of the deeply controversial decision to evict four Palestinian families in East Jerusalem’s Sheikh Jarrah neighborhood.

The case made headlines around the world and led to repeated clashes between Palestinians and Israeli police. An appeal is currently pending before Israel’s Supreme Court. After clashes around the case led to high tensions across East Jerusalem in early May, the government was said to tell the Supreme Court to delay a decision on the matter. 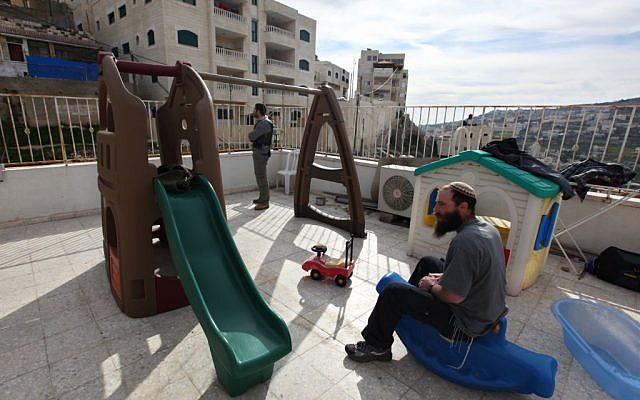 An Israeli security guard (background) looks away as a Jewish resident sits on the roof of Beit Yonatan, a building in the East Jerusalem neighborhood of Silwan, February 8, 2010. (Flash90/Kobi Gideon)

Hamas has linked its firing of rockets at Jerusalem, which set off the 11-day conflict with Israel earlier this month, to the Sheikh Jarrah case along with clashes on the Temple Mount between police and Palestinians.

The Israeli Foreign Ministry has said the Sheikh Jarrah evictions are “a real-estate dispute between private parties” and denied any political dimension to the case.

Palestinians reject that argument, saying that the issue is fundamentally part of their national cause. Many hope to see a Palestinian capital in Jerusalem as part of a future Palestinian state and view the evictions as an attempt to edge out Palestinians from the city.

“These aren’t people who come to live with us and coexist. They’re not coming to be our neighbors. They’re literally coming to take our homes and throw us out into the street,” said Nancy al-Rajabi, who lives in one of the homes.

Around 38% of Jerusalemites are Palestinian. The vast majority live in East Jerusalem, a cluster of neighborhoods captured by Israel from Jordan in 1967 and annexed by Israel in 1980, in a move not recognized by most of the international community.

Some right-wing Jewish Israelis have sought to increase the Jewish presence in Palestinian neighborhoods, such as Silwan and Sheikh Jarrah.

East Jerusalem land that may have belonged to Jewish organizations prior to Israel’s 1948 War of Independence is managed by the Justice Ministry. A 1970 law allows Israelis to reclaim such property in East Jerusalem. But no similar law exists for East Jerusalem Palestinians, many of whom also fled or were expelled from their homes in 1948.

In the case of Batan al-Hawa, the land in question was owned by a Jewish religious endowment, known as the Benvenisti Trust, during the late 19th century.

Yemenite Jews lived in houses in the area administered by the endowment, leading the area to become known as the Yemenite Quarter. Only one of the original homes remains, according to the left-wing nonprofit Terrestrial Jerusalem.

The land was purchased from the trust in 2002 by Ateret Cohanim. The organization has no direct relationship to the Yemenite families that lived in the property before the establishment of Israel.

Since then, Palestinians have fought a house-by-house battle with the property’s legal owners. The cases can take years or even decades and see dozens of hearings as they wind their way through Israeli courts.