The Palestinian Authority has quietly returned its ambassadors to Bahrain and the United Arab Emirates after it recalled them in protest of the two states’ decision to normalize ties with Israel, according to media reports Wednesday.

Ramallah did not officially confirm the reports, which were carried in Reuters, Saudi-backed al-Arabiya, and the major Palestinian news agency Ma’an. A spokesperson for the PA Foreign Ministry did not respond to a request for comment.

The ambassadors to the Emirates and Bahrain were first recalled back in August and September, respectively, in the immediate aftermath of the Gulf states’ announcement that they were normalizing ties with Israel. The move infuriated the Palestinians, who condemned it as a “stab in the back” and a “betrayal.”

“The Palestinian leadership rejects the actions of the Emirati government, considering it to be a betrayal of the Palestinian people and Jerusalem and al-Aqsa,” PA spokesperson Nabil Abu Rudeineh said in a statement read aloud on Palestine TV in the immediate aftermath of the trilateral Emirati-Israeli-American announcement of the deal.

PA President Mahmoud Abbas immediately ordered the PA Foreign Ministry to recall the Palestinian envoys to both countries. The attempt to bring diplomatic pressure to bear so as to force Abu Dhabi and Manama’s to retract their move, however, ultimately proved unsuccessful.

In mid-September, the Arab League struck down a draft resolution presented by the PA which would have condemned normalization with Israel. While the Palestinians attempted numerous strategies since then — such as beginning unity talks with its rival Hamas and engaging with the UAE’s regional rivals Turkey and Qatar — they bore little fruit,

If the reports are confirmed, the move would be part of a sharp shift in regional strategy by the Palestinian Authority following Joe Biden’s victory in the US presidential elections.

Ramallah has had a difficult relationship with US President Donald Trump, who they viewed as lopsidedly pro-Israel. Trump cut aid to the West Bank and Gaza, expelled the Palestinian envoy in Washington, and presented a peace plan which the Palestinians believed granted too many concessions to Israel.  The PA has boycotted his administration since 2017, when Trump announced that he would move the US embassy from Tel Aviv to Jerusalem.

Biden, by contrast, has opposed parts of Trump’s peace plan and pledged to undo some of the Trump-era policies most loathed by the Palestinians. 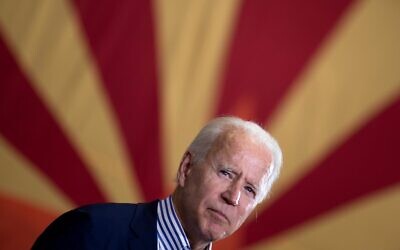 In this file photo taken on October 8, 2020 Democratic presidential candidate former US Vice President Joe Biden pauses while speaking to supporters in front of an Arizona state flag, at the United Brotherhood of Carpenters and Joiners of America’s training center in Phoenix, Arizona. (Brendan Smialowski / AFP)

On Tuesday night, senior PA official Hussein al-Sheikh announced that Ramallah was renewing its ties with Israel. The announcement ended a six-month-long crisis which saw the tight security coordination between Israel and the Palestinians collapse and hundreds of thousands of Palestinian civil servants go without their full salaries.

“We’re going off of what the new administration has announced in their campaign…they’ve said the Trump Peace Plan will be off the table, the [restoration of] the PLO mission and the East Jerusalem Consulate and UNWRA aid, and so on,” al-Sheikh said on Tuesday night.

“This, for us, is not just a window, it’s a gate through which we can re-establish our relationship with the United States,” al-Sheikh said.

The Kan Public Broadcaster also reported on Wednesday that the PA was also considering revising its policy of paying hundreds of millions of dollars in stipends paid out to Palestinians convicted of security offenses or the families of attackers.

Israel has long sought to clamp down on the policy, which it says constitutes incitement to terrorism. But Ramallah has defended them numerous times in the past, describing them as a form of social welfare and compensation for what they claim is an unfair military justice system.