NEW YORK (AFP) — Two months into lockdown, 29-year-old Ella left the ultra-Orthodox Jewish community that she was raised in near New York, started wearing pants for the first time and contacted an organization that helps “leavers” adapt to life in wider society.

US groups like the one she approached report increased demand for their services since coronavirus, from people with more time for soul-searching to others troubled by social distancing violations and some who have already left needing counseling and financial support.

Ella, an alias because she has yet to tell her parents that she has quit Orthodoxy, said she was always interested in the world outside her “extremely religious family.” When she was younger she hid romance novels under her mattress and sometimes “pushed” the limits of her community’s strict dress code.

In the summer of 2019, she and her husband took their first steps toward breaking away by moving a couple of miles down the road to a community whose adherence to Jewish law was not quite as strict.

When lockdown happened in March 2020, they found themselves cut off from friends and family, which gave them space and months to think about whether they wanted to take the next step and leave their community altogether.

“We had time to cement our new identity and feel confident that we made the right decision before having to face anybody,” said Ella.

She was one of more than 150 people in 2020 who joined the New York-based organization Freidom, which supports former ultra-Orthodox, or Haredi, Jews, primarily Yiddish speakers, navigate culture and language in secular US society.

The group saw a 50 percent increase in participation in events — which typically include hikes, cinema and restaurant trips but are currently virtual — from new members last year, according to founder Gene Steinberg.

Not all newly left: like 25-year-old Ben, who received counseling after he separated from his wife, a marriage that had been arranged, shortly before lockdown and found himself living alone without his kids.

The non-profit Footsteps has seen its membership increase by around 18 percent over the past year, according to one of its officials, Yael Reisman.

For her, large weddings and funerals organized by some Orthodox rabbis last summer despite distancing restrictions, coupled with a devastating death toll in Hasidic communities early on in the city’s outbreak, contributed to the questioning. 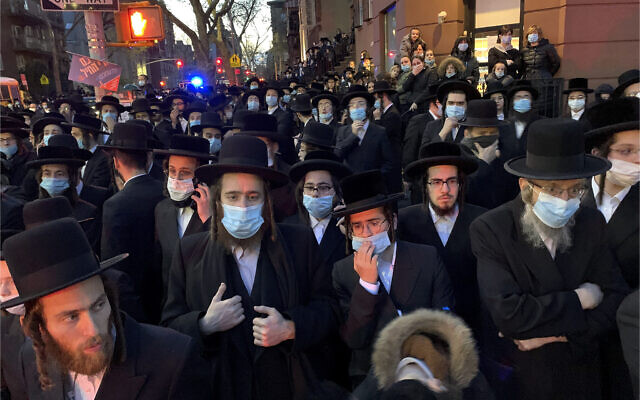 Illustrative: Hundreds of mourners gather in the Brooklyn borough of New York, Tuesday, April 28, 2020, to observe a funeral for Rabbi Chaim Mertz, a Hasidic Orthodox leader whose death was reportedly tied to the coronavirus. (Peter Gerber via AP)

Areas of Brooklyn with a large Haredi population, such as Borough Park, resisted some measures, including through protests, prompting authorities to intervene and sparking controversy that they were being unfairly targeted.

“You start to think that the people you rely on and trust maybe aren’t doing it the right way,” said Reisman.

Shaya Schtroks, a 34-year-old former rabbi who left Hasidism nine years ago, said he received a “critical” $10,000 after the pandemic scuppered his real estate finance business.

The swelling of online events has made it easier to join the groups, especially for people outside the New York region, home to the largest Jewish population outside Israel, with some two million people from secular to Haredi.

At the same time, many of the tempting pleasures of a less religious life, such as shows or bars, are on hold.

“I think it’s bringing more people out. But I also think it’s slowing down their process,” said Reisman.

The idea of leaving ultra-Orthodoxy was the subject of the hit 2020 Netflix series “Unorthodox.” 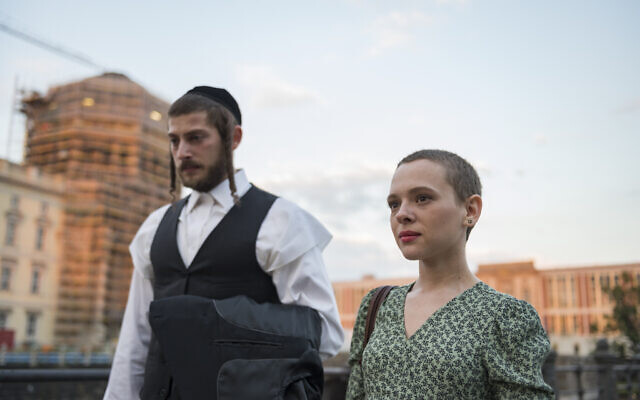 No concrete numbers exist to assess how many leave, says sociologist Schneur Zalman Newfield. The communities themselves remain silent and many who leave do so in secrecy.

“I do think it’s more common. People on the inside are more aware of the process,” said Newfield.

Members of Orthodox groups stress sense of solidarity and belonging that exists in the tight-knit communities. 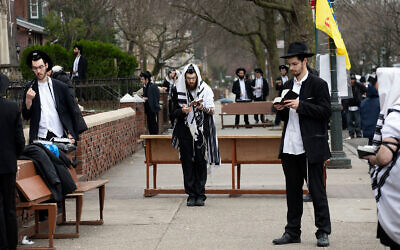 Rabbi Yaacov Behrman, spokesman for the Brooklyn-based Chabad Lubavitch Headquarters, said there were “many resources available” to people in need during the pandemic.

Project Makom, an initiative that helps former and questioning Haredis find their place within Orthodoxy, has seen membership almost double from 85 in 2019 to 160 in 2020.

“A lot of people are sort of restructuring their priorities right now, and so this group is not different,” said founder Allison Josephs.

Ella enjoyed a low-key Passover this week as she contemplates her new life.

“I finally have the chance to think for myself but I’m not exactly used to doing it. So I’m trying to explore what I want for my future,” she said.