SURFSIDE, Florida (AP) — Florida officials are working on plans to tear down what’s left of a partially collapsed oceanfront condominium building after concerns about the structure’s instability prompted a 15-hour halt to the search for survivors.

After rescue efforts resumed Thursday evening, officials said they had started planning for the likely demolition of the remaining structure even as searchers continue to comb the rubble pile beneath it.

Scott Nacheman, a FEMA structures specialist, said engineers are looking at different methods for the demolition and how to proceed “to make the site safe for ongoing rescue operations.”

Nacheman said that if the building comes down, there initially will be a slowdown in the rescue operation. But he said the demolition of the structure would create a safer working environment that could allow more personnel on the site and accelerate the pace of the work.

He said it would likely be weeks before officials schedule the demolition.

On Friday morning, about a dozen workers could be seen digging through the pile that now reached about 20 feet (6 meters), more than 10 feet (3 meters) less than it was a week ago. Cranes were again lifting heavy objects from the pile and then workers would climb into the pile and begin removing smaller rubble by hand.

A team works to extricate remains as search and rescue personnel look on, atop the rubble at the Champlain Towers South condo building where scores of people remain missing more than a week after it partially collapsed, Friday, July 2, 2021, in Surfside, Florida (AP Photo/Mark Humphrey)

Miami-Dade County Mayor Daniella Levine Cava said the decision about the demolition needs to be made “extremely carefully and methodically,” considering the potential impact on the pile of debris and the effect on the search.

The rescue work was halted early Thursday after crews noticed widening cracks and up to a foot of movement in a large column.

Work resumed shortly before 5 p.m. after the site was evaluated by structural engineers, Cava said, describing firefighters as “really, really excited out there.”

“We will continue to search feverishly, as we have done all along in the parts of the collapse that we currently have access to,” she said.

The work stoppage had threatened to dim hopes for finding anyone alive in the debris a week after the tower came down. Surfside Mayor Charles Burkett said the halt was worrisome since “minutes and hours matter, lives are at stake.” 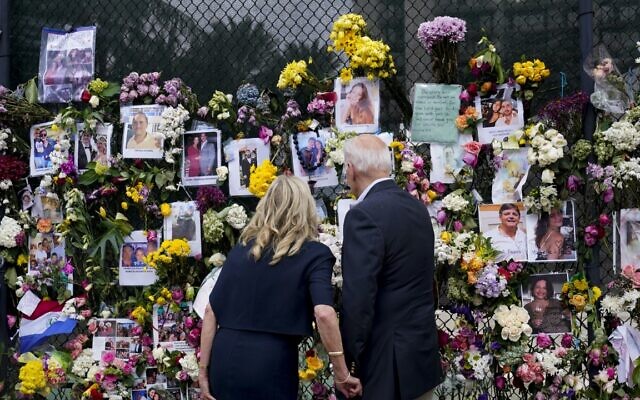 The collapse of the 12-story Champlain Towers South condominium killed at least 18 people and left 145 missing. No one has been rescued since the first hours after the collapse.

“This is life and death,” Biden said during a briefing. “We can do it, just the simple act of everyone doing what needs to be done, makes a difference.”

“There’s gonna be a lot of pain and anxiety and suffering and even the need for psychological help in the days and months that follow,” he said. “And so, we’re not going anywhere.”

Peter Milián is a cousin of Marcus Guara, who died along with his wife, Anaely Rodriguez, and their two children, 10-year-old Lucia Guara and 4-year-old Emma Guara. Milián said he understood why the rescue work had to be temporarily halted.

“I mean, they’ve done everything they can. But we trust the people that are on the ground. And obviously, they’ve got to do what’s best for their people, right? Because it is a dangerous situation,” he said. 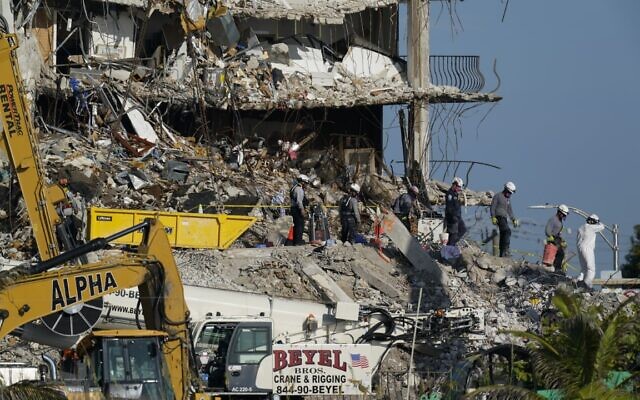 Search and rescue personnel work atop the rubble at the Champlain Towers South condo building, where scores of people remain missing more than a week after it partially collapsed, Friday, July 2, 2021, in Surfside, Florida (AP Photo/Mark Humphrey)

During a private meeting with family members, Biden drew on his own experiences with grief to try to comfort them. Biden lost his first wife and baby daughter in a car crash and decades later lost an adult son to brain cancer.

“I just wish there was something I could do to ease the pain,” he said in a video posted on Instagram by Jacqueline Patoka, a woman who was close to a couple and their daughter who are still missing.

Biden spoke of wanting to switch places with a lost or missing loved one. “The waiting, the waiting is unbearable,” he said.

The cause of the collapse is under investigation. A 2018 engineering report found that the building’s ground-floor pool deck was resting on a concrete slab that had “major structural damage” and needed extensive repairs. The report also found “abundant cracking” of concrete columns, beams and walls in the parking garage.

Just two months before the building came down, the president of its board wrote a letter to residents saying that structural problems identified in the 2018 inspection had “gotten significantly worse” and that major repairs would cost at least $15.5 million. With bids for the work still pending, the building suddenly collapsed last Thursday.