The race for Israel’s next president has been set, and it will be a head-to-head matchup between Jewish Agency chairman Isaac Herzog and Israel Prize-winning educator Miriam Peretz after all remaining contenders dropped out shortly before the midnight Thursday filing deadline.

The parliamentary vote for the next president will be held in a secret ballot among the 120 members of Knesset on June 2, just over a month before President Reuven Rivlin’s seven-year term ends on July 9.

Candidates were required to receive signatures from at least 10 MKs by the end of Wednesday in order to run. Herzog filed with 27 signatures, and Peretz filed with 11. Herzog, who is also a former chairman of the Labor party and the son of Israel’s 6th president Chaim Herzog, is seen as a frontrunner. However, the secret nature of the voting process could well leave an opening for Peretz to become the first woman ever elected to the position.

Renowned singer and actor Yehoram Gaon, former Labor MK Michael Bar-Zohar and former Likud MK Yehudah Glick who had launched early candidacies of their own, each announced their decision to bow-out shortly before the filing deadline — apparent recognition that they lacked the support necessary.

Herzog said Wednesday that he had taken unpaid leave from the Jewish Agency until after the presidential election.

“My personal family history and years-long public experience have taught me to never take the miracle of the existence of the State of Israel for granted,” he said in a statement, highlighting the need to heal and unite the nation following the ongoing Gaza fighting and the extended political crisis, as well as the need to strengthen ties with world Jewry.

Peretz became a household under the most tragic of circumstances after her eldest son Uliel was killed fighting in Lebanon in 1998 and his little brother Elraz was killed in an operation near Gaza in 2010. But the Casablanca native went on to become a motivational speaker on issues surrounding Zionism and coping with loss. In 2018, she won the Israel Prize for lifetime achievement, the country’s highest cultural honor.

In 2019, several political parties courted Peretz to join them ahead of the first of four elections held in the past two years. The interested slates included New Right, Kulanu, and Yesh Atid — parties from the right-wing, center-right and center. Peretz turned down the offers, explaining that she wanted to continue her public work outside the framework of politics, where she believed she’d have greater influence. 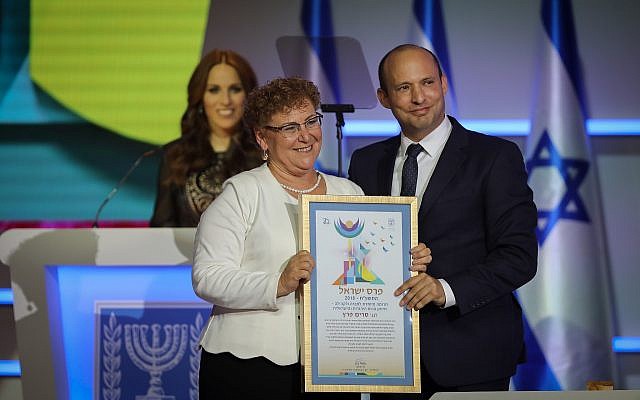 “Fate ordained that the Knesset’s timetable necessitates me to submit my candidacy today, while rockets sound in the background,” she wrote in a Facebook post Wednesday announcing her candidacy.

“But it is just at this time, when our country is riven and divided, that we need unity,” Peretz said, promising to bring Israelis closer together if elected.

While Peretz is seen as a popular and unifying figure, the bulk of her support will likely come from the right given her ties to the national religious camp and the fact that she’s running against a former chairman of the center-left Labor party.

Peretz would be the first woman elected president, but she would not be first woman to serve in the position. In 2007, then-Knesset speaker Dalia Itzik served as acting president for several months following the resignation of Moshe Katsav over rape allegations for which he was ultimately convicted.