The Pfizer-BioNTech vaccine is 91 percent effective in preventing COVID-19, including up to six months after receiving the second shot, and is highly effective against the South African strain of the virus, the companies said in a statement Thursday.

Updated data for over 12,000 people who took part in original trials also showed the inoculation poses no serious safety concerns.

Israel has already vaccinated over half of its population using the Pfizer-BioNTech shots and aims to finish inoculating all those over the age of 16 by the end of April.

“The high vaccine efficacy observed through up to six months following a second dose and against the variant prevalent in South Africa provides further confidence in our vaccine’s overall effectiveness,” said Albert Bourla, chief executive of Pfizer.

No cases of the disease were observed in South Africa during the phase-three trial study among participants who had received their second dose, the statement said.

Several coronavirus variants with the potential to be more transmissible have caused global concern over whether existing vaccines will still protect the world from a virus that is constantly mutating.

“In South Africa, where the B.1.351 lineage is prevalent and 800 participants were enrolled, nine cases of COVID-19 were observed, all in the placebo group,” the companies said.

The nine strains were sequenced and six of them were confirmed to be of B.1.351 lineage, they said.

Overall, the vaccine was 91.3 percent effective against COVID-19 in the analysis of 46,307 trial participants across several countries. The figure was slightly down from the 95% effectiveness initially touted for the vaccine.

Pfizer and BioNTech had said in January that “small differences” detected in tests comparing the original virus and the recent versions “are unlikely to lead to a significant reduction in the effectiveness of the vaccine.” 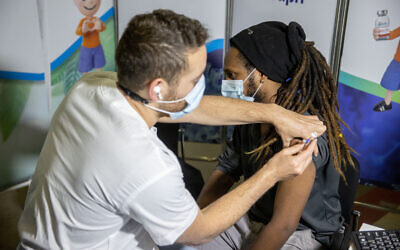 An Israeli man receives a COVID-19 vaccine at a Clalit vaccination center in Jerusalem on March 11, 2021. (Yonatan Sindel/Flash90)

The companies said Thursday the new data “support previous results from immunogenicity studies demonstrating that (the vaccine) induced a robust neutralizing antibody response to the B1.351 (South African) variant, and although lower than to the wild-type strain, it does not appear to affect the high observed efficacy against this variant”.

Bourla said that in light of the updated results, Pfizer plans to submit a request for full regulatory approval in the US, rather than the current emergency FDA approval.

“These data confirm the favorable efficacy and safety profile of our vaccine and position us to submit a Biologics License Application to the US FDA,” Bourla said.

Global deaths from COVID-19 have topped 2.8 million since the pandemic began a year ago, with vaccines seen as the only real chance of returning to some form of normality.

The announcement from Pfizer and BioNTech came the day after the companies said announced that Phase Three trials had shown their vaccine is 100 percent effective against the coronavirus among 12- to 15-year-olds.

Israel’s Health Ministry responded to the news by saying it will begin vaccinating young adolescents in that age bracket as soon as the US Food and Drug Administration and European regulators authorize its use.