“We shrieked, we yelled, we hollered — we jumped for joy,” recalled Pogrebin, who at the time was sitting in her office on Lexington Ave. and 41st St. with her fellow editors at Ms., the iconic feminist publication.

“I remember thinking ‘that’s it — the struggle is over,’” said Pogrebin, laughing to herself.

Since that day, she and millions of other American feminists have learned that the “struggle is never over.” The recent confirmation of Amy Coney Barrett to the United States Supreme Court cemented the court’s conservative majority and left many lifelong activists for reproductive and women’s rights, including Pogrebin, to wonder if the clock would begin to turn back a career’s worth of hard-earned victories.

(Though Barrett refused to be pinned down on the issue of Roe v. Wade during her hearing before the Senate Judiciary Committee, there is evidence that she personally opposes abortion, including signing her name to a letter in the South Bend Tribune criticizing Roe’s “barbaric legacy.” During her confirmation hearings, she said Roe does not meet the criteria of a “super precedent” and therefore is not settled law.)

Illustrative: US President Donald Trump and Amy Coney Barrett stand on the Blue Room Balcony after Supreme Court Justice Clarence Thomas administered the Constitutional Oath to her on the South Lawn of the White House White House in Washington, October 26, 2020. (AP Photo/Patrick Semansky)

“We used to think that a conservative justice might change their stances,” said Pogrobin, 81, who remembers a “court where there were no women at all.” She cited former Justice Hugo Black, who was revealed to be a member of the Ku Klux Klan before his confirmation to the high court in 1937. Despite initial outrage at the disclosure, Black went on to become a prominent champion of civil liberties and civil rights. “We don’t feel that way anymore,” said Pogrebin. “Today, justices are being chosen to deliver on the conservative agenda.”

The Jewish Week checked in with Pogrebin, 81, on the eve of Election Day and after a tumultuous few months that saw the death of Supreme Court Justice (and fellow Jewish feminist) Ruth Bader Ginsberg and her swift replacement by the conservative Barrett.

As a founding editor of Ms., and as recounted in her groundbreaking 1991 memoir “Deborah, Golda, and Me: Being Female and Jewish in America” (citing the biblical prophet and Israel’s first female prime minister), Pogrebin took part in some of the most important feminist battles of the past 50 years.

She was acutely aware that many of those legal victories are in danger of being undone. 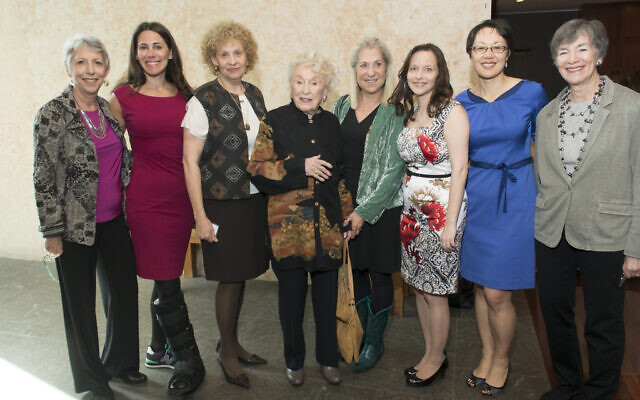 “Did you call looking for optimism?” she teased over the phone. “I can’t help you this week. Try me next week after the votes have been counted.”

Pogrebin is a sharp and studied interviewee — she anticipated questions before they are asked, refused to be derailed on tangents and gently critiqued a reporter’s approach (“you can Google that,” she responded when asked for the date of a certain issue of Ms.).

Pogrebin wears her progressive Jewish identity proudly, saying, “my work has always been inspired by the Jewish obligation to repair the world and finish what God didn’t have time to create in six days.”

Pogrebin is worried that religious freedom will trump other freedoms under this court, she said, excusing the pun.

Aside from abortion rights, the conservative-majority court is predicted to hear cases involving religious liberty claims pertaining to same-sex marriage, tax exemptions for religious institutions and religion in public education, among others. 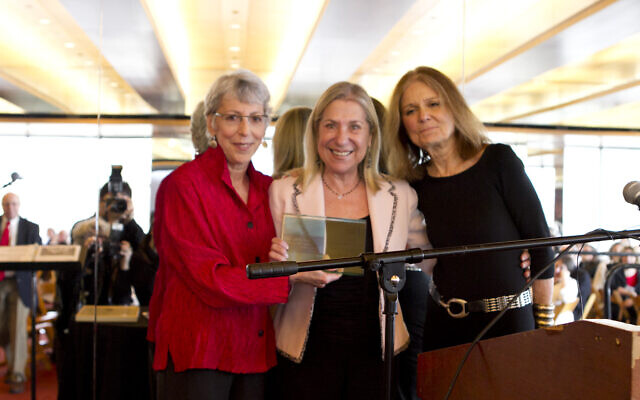 “Jews have traditionally benefited from a strong separation between church and state,” said Pogrebin, pointing out that American adults who self-identify as Jewish make up just 2.2 percent of the United States’ population, according to the most recent study by Pew Research Center. “In a matter of majority rules, Jews will always lose.”

She worries that religious freedom has come to mean “freedom to” discriminate, as in a case being heard this week of a Catholic charity with a government contract that doesn’t want to certify same-sex couples as foster parents.

“In that sense Jews have to be on the alert,” said Pogrebin. “As a Jewish woman, I will be monitoring legislative progress on various issues and the shifting balance between religious ‘freedom’— or really power — and the other freedoms guaranteed us by the Bill of Rights.”

If you ask Pogrebin, pursuing social change via the Supreme Court is today “a lost cause.”

“Change will come through legislation,” she said firmly, noting that this is what “originalists” — those who believe that the Constitution should be interpreted as it was originally meant when adopted — like Barrett and her late mentor Justice Antonin Scalia have pursued all along. “I predict the courts will no longer be the place where policy is decided.” 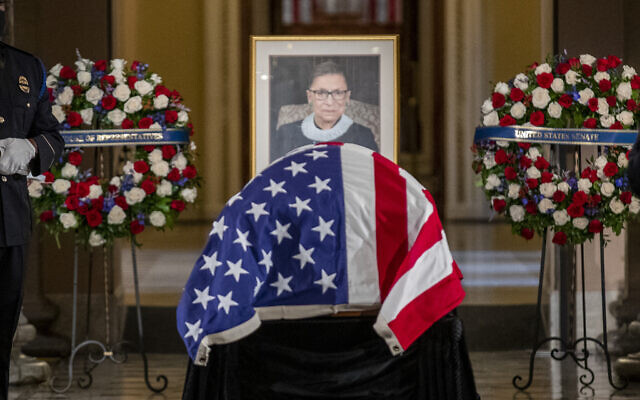 Justice Ruth Bader Ginsburg lies in state in Statuary Hall of the US Capitol on September 25, 2020. (Shawn Thew/Pool via AP)

At what she described as a “turning point” in American history, she reflected on her relationship with Ginsburg, whose death left a seat vacant for Barrett and now leaves the court with a 6-3 conservative majority. During Pogrebin’s many years as a journalist, Ginsburg served as a trusted source as a litigator for the ACLU. Ginsburg argued six gender discrimination cases before the Supreme Court between 1973 and 1976, winning five.

I didn’t think she could possibly die before November 3

“I started to cry,” she said of hearing the news of Ginsburg’s death. “With her iron will, I kind of believed she would be there as long as we needed her. I didn’t think she could possibly die before November 3.”

If not a note of optimism, I asked what message she would impart to a young generation of Jewish feminists, one day before such a historic election.

“Don’t take your rights for granted,” she said. “If you opt out of the fight and decide to rest on the opportunities we, the last generation, fought for you to have, there is no guarantee they will last.” She paused. “And, remember that what you’re fighting for is worth it. The backlash will whip us down, but it proves what we’re doing is important.”