City officials on Monday lambasted the government’s decision to allow first and second grades to only reopen part-time starting next week, calling it a “ludicrous” decision that won’t enable parents of young children to go back to work.

Under the plan approved by ministers on Sunday evening, children in third and fourth grade will be divided into pods and resume studies five days a week from November 1, while those in first and second grade will be split into two groups that will alternate days and go to school only three times a week. Children in fifth grade and above will continue remote learning.

The Education Ministry had not planned on splitting first and second grades into pods and does not have the time or budget to double the number of teachers and instructional spaces, forcing the inelegant compromise to meet Health Ministry demands for smaller classes.

Haim Bibas, the head of the national mayors union, called the decision “entirely ludicrous and disconnected,” according to Army Radio.

“In practice, the students in first and second grades won’t go back to class on Sunday. An entire generation is being lost,” said Bibas, who is also the mayor of Modiin and an observer in the coronavirus cabinet as representative of the local authorities.

Schools have been closed since September 18, when a nationwide lockdown came into force to drive down infection rates, though preschools and daycares were permitted to reopen last week. The reopening of the school system on September 1 has been blamed for a huge spike in virus cases several weeks later.

The move to gradually reopen the school system comes after the daily virus numbers have dropped considerably following five weeks of lockdown. With most households in Israel having two working parents, getting the economy back on its feet is directly linked to having schools open for children to attend during the day.

Bibas said he pleaded with the ministers not to make hasty decisions Sunday on the reopening of schools that would be rejected by parents or undermine their ability to return to work. 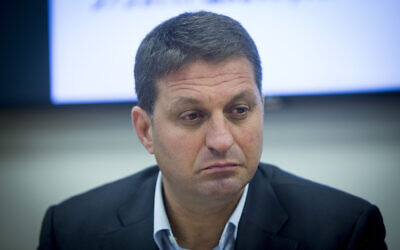 Haim Bibas, mayor of Modiin and chairman of the Federation of Local Authorities. (Yonatan Sindel/Flash90)

He also urged the government to give local authorities greater powers on the issue.

“The time has come for them to give us the authority and we will present plans,” he said.

According to the Kan public broadcaster, Health Ministry officials had proposed moving responsibility for finding solutions for splitting the classes into the willing hands of local authorities, but the Education Ministry rejected the idea.

Orit Arnon, a Tel Aviv principal, told Army Radio that the Education Ministry should “give us, the people on the ground, the independence to do what is best for the kids. Not impose strict guidelines on us.”

“The most complicated age for remote learning is first and second grades,” he said. “They should have brought back grades 1-3 in ‘capsules’ and have grades 4-12 learn in school for half the week,” he told Army Radio on Monday.

The plan to split grades 3 and 4 into pods had previously been approved and funded. However, the Education Ministry said implementing that solution in grades 1 and 2 as well, as the Health Ministry demanded, would cost an additional NIS 5.3 billion ($1.57 billion) and require five weeks of preparation including the hiring of 13,000 new employees. The Finance Ministry opposed any plan that would require additional funding.

The decision on first and second grades splitting time was later adopted as a compromise.

Though schools nationwide have been officially shut due to virus restrictions, hundreds of ultra-Orthodox elementary and high-school yeshivas — including in high-infection areas — opened last Sunday in defiance of the law at the order of a senior rabbi, with many ultra-Orthodox officials justifying the move and police only sporadically enforcing the restrictions.