Prime Minister Benjamin Netanyahu will be sedated Friday during a medical exam, his office said, with Defense Minister Benny Gantz, who is also alternate prime minister, acting as premier during the checkup.

The exam is a “routine checkup on the gastrointestinal tract that was scheduled in advance,” a statement on Thursday from the Prime Minister’s Office said.

Netanyahu will be accompanied by his personal physician, according to the PMO.

“Defense Minister Benny Gantz will fill in as prime minister during the checkup,” the statement said.

In recent years, Netanyahu has appointed various ministers from his Likud party to take the reins while he was abroad or undergoing medical exams, having never named a permanent designated deputy since returning to the Prime Minister’s Office in 2009.

However, after Netanyahu and Gantz agreed to form a government earlier this year following three straight inconclusive elections, the rivals signed a power-sharing deal creating the post of alternate prime minister, with the two trading off as premier.

Under the coalition deal, Gantz is slated to become prime minister on November 17, 2021, but exactly a year to the day before then, both he and Netanyahu expressed doubt about that prospect and few politicians or analysts seem to believe that the transfer will go ahead.

The coalition deal was supposed to block loopholes Netanyahu could use to avoid handing over power, and stipulated that if Netanyahu dissolves the government before his tenure ends, Gantz automatically becomes interim prime minister. 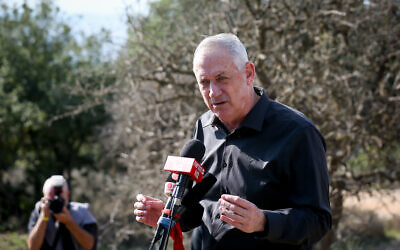 One loophole remains, however: If the government falls due to failure to pass the state budget, Netanyahu retains the premiership.

Now the prime minister is refusing to follow through on the coalition deal’s stipulation that a budget be approved this year for both 2020 and 2021. He has been accused of using the budget as leverage, while charging that Gantz has been violating the coalition agreement himself.

When the rotation agreement was signed, Netanyahu said on primetime TV that he would honor the deal with Gantz “without any tricks.”

Gantz warned Monday that if Netanyahu doesn’t “get a grip” and allow the government to secure a budget and make policy decisions, the Knesset will disband and new elections will be called, in what would be the fourth round of voting within two years. With coral research delayed by crash, scientist not waiting to dive back in