Prime Minister Naftali Bennett said on Sunday that technological means would be used to check on the location of those in quarantine, asking the attorney general and public security minister to examine the legal implications of such a move.

According to a statement from the Prime Minister’s Office, the premier conveyed his request to Attorney General Avichai Mandelblit and Public Security Minister Omer Barlev at a meeting of officials regarding the increased enforcement of coronavirus regulations.

The system would allow police to track the locations of those who are quarantining by sending a text message with a link to their phones. When the individual in isolation clicks on the link, their physical location is immediately shared with law enforcement.

It was not clear how the system would work for those who don’t have phones, such as young children, or those who choose not to carry them when leaving the house.

The use of the system was announced by the previous government earlier this year, but was ultimately barely used.

Under the current system, those in isolation are told they may be visited by police at any time, but that rarely occurs in practice.

The statement announced that the officials present at the meeting, which included Israel Police chief Kobi Shabtai and Health Minister Nitzan Horowitz, agreed that criminal indictments would be filed against those found to knowingly violate quarantine regulations.

There would also be a streamlining of the process of imposing fines, with the amount of time reduced between the imposition of the fine and its payment.

Furthermore, mass events and celebrations — with a particular emphasis on weddings — will be a top priority for enforcement. The statement noted the potential for widespread infections as a result of those gatherings.

There will also be increased checks on those obligated to self-isolate.

All enforcement of pandemic regulations will be under the supervision of the Public Security Ministry. 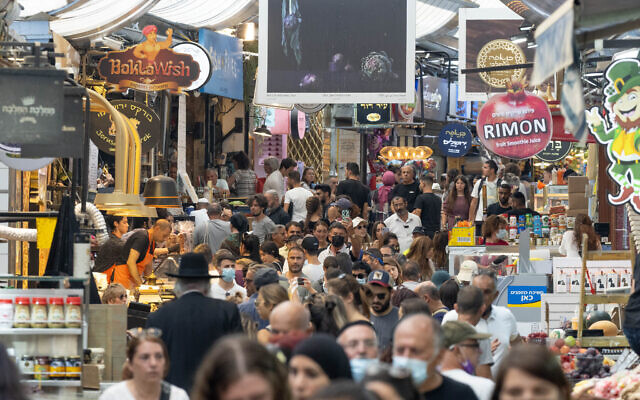 People shop at the Mahane Yehuda market in Jerusalem, on July 15, 2021. (Yonatan Sindel/Flash90)

“Our goal is to establish sensible guidelines, along with aggressive and effective enforcement against those who violate them,” Bennett said in Sunday’s statement. “Anyone who violates the restrictions endangers their health and that of the rest of Israel’s citizens.”

“The implementation of the restrictions is a critical component in the management of the epidemic in order to defeat the [Delta] variant,” Bennett said.

Army Radio reported on Sunday that health officials were unhappy with the “Revelry Pass” system, slated to come into effect on July 21, under which rapid tests are to be deployed at the entrance to large indoor events such as weddings, where the unvaccinated will need to show a negative test result in order to gain entry.

The unnamed health officials told the radio station that the government should instead immediately reintroduce the Green Pass vaccination certificate — which would once again limit attendance at performances, restaurants, hotels and gyms — in light of the continued rise in new coronavirus cases.

The latest data from the Health Ministry on Sunday showed that there were 430 new coronavirus cases diagnosed on Saturday — testing rates, and therefore the number of reported cases, are lower at the weekends.

However, there were 1,118 cases diagnosed on Friday, the highest rate in nearly four months.

There were 63 patients in serious condition as the total number of cases continued to creep upward, but there was only one locality classified as a high-infection area under the Health Ministry’s “traffic light” system — the central Israel agricultural village of Beit Yitzhak-Sha’ar Hefer.

In an interview with Channel 13 on Saturday, the head of public health at the Health Ministry, Sharon Alroy-Preis, said that action needed to be taken to limit cases coming into Israel from abroad.

“We are not at the stage of closing down air travel, but we need to find a way to reduce the risk from countries around the world,” she said. 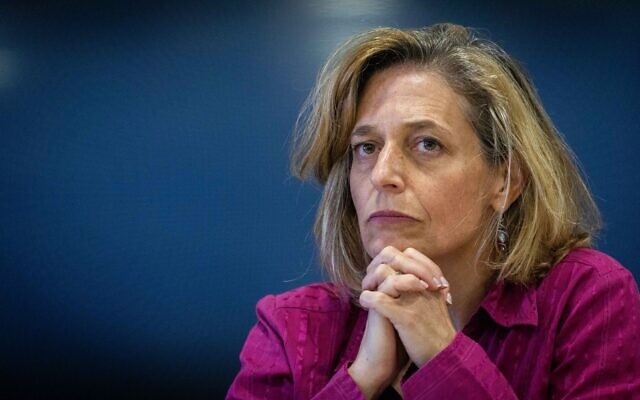 Dr. Sharon Alroy-Preis, head of public health services in the Health Ministry, at a press conference in Jerusalem, on June 23, 2021. (Yonatan Sindel/Flash90)

Alroy-Preis also raised the matter of the United Kingdom, which has seen rapidly rising cases and is set to lift all remaining restrictions on Monday. According to a report by the Kan public broadcaster on Saturday, the UK could soon be added to the banned travel list.

“Morbidity is rising all over the world, and 21 coronavirus cases were discovered in travelers arriving from the United Kingdom,” Alroy-Preis said, without giving a timeframe for the discovery of those cases. “The issue needs to be reexamined.”

Since Friday, all travelers, including those who are vaccinated or have recovered from COVID-19, have been required to self-isolate for 24 hours upon arrival to Israel, or for a shorter period if they receive a negative test result.

Those returning from 15 countries deemed to have high infection rates are required to quarantine for seven days with a negative test result, according to the ministry’s updated guidelines. The full quarantine period was recently shortened from the previous 10-14 days. 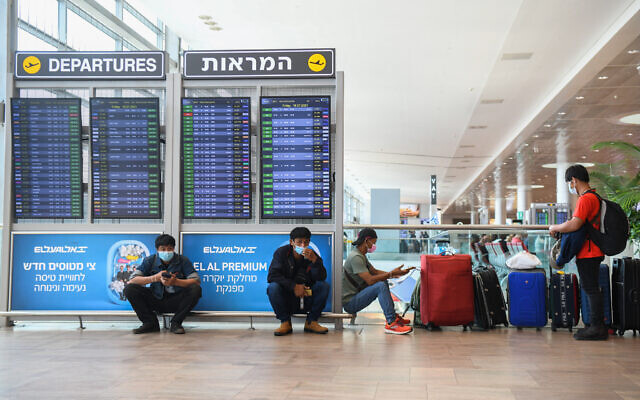 The Health Ministry said on Friday that from July 23, Spain and Kyrgyzstan will be added to the list of countries that Israelis are barred from flying to due to extreme rates of infection — provided that a government committee approves the ministry’s request.