In a sign of increasing tensions within both the government and the ruling Likud party, Prime Minister Benjamin Netanyahu reportedly suggested Friday that Finance Minister Israel Katz had crossed a line in his public criticism of the government decision not to reopen street stores, even questioning whether Katz should remain in the government.

Katz raised Netanyahu’s ire during a lengthy virtual meeting that saw Katz of Likud clash with other officials, including party leader Netanyahu, over the store reopenings.

After expressing his opposition to the decision not to allow stores to open on Sunday as several other lockdown restrictions are lifted, Katz tweeted from the meeting that he had called for Netanyahu’s support, and said, “The Health Ministry is acting opaquely and conducting a costly campaign on the backs of small businesses, whose owners started businesses with their bare hands and are now on the verge of collapse.”

Cabinet secretary Avishai Braverman told the prime minister of the tweets, saying “Some ministers not only leak [from these meetings], but also tweet against each other in the middle of a sitting,” the Ynet news site reported.

An infuriated Netanyahu reportedly responded by saying, “This is something new. Whoever tweets during a discussion does not need to be member of the government.”

Government ministers decided early Friday to move forward the reopening of synagogues to Sunday and allow hairdressers and beauty parlors, as well as “one-on-one” activities, including driving lessons and personal fitness training to operate, but to keep street stores closed until at least November 8.

Katz and Health Minister Yuli Edelstein of Likud voted against the decision, according to Hebrew media reports. Katz demanded stores reopen on Sunday, while Edelstein said the government should agree on lockdown decisions unanimously, and stick to the reopening plan that called for easing measures every two weeks.

Synagogues were supposed to remain closed until November 15, according to the original reopening plan.

At the meeting, Netanyahu told ministers that the plan is to open street stores on November 15, but if the number of new virus cases diagnosed dips below 500 they will be allowed to open a week earlier, on November 8, according to leaks from the meeting picked up by the Walla news site.

Katz appealed to Netanyahu to move up the store reopenings, but the premier refused.

“The street shops have reached a stage of utter distress. I turn to you, it is impossible to postpone, it is not a solution. They can be opened. They have no lobby or power, they only have their shop and their wares,” Katz said, according to Ynet. 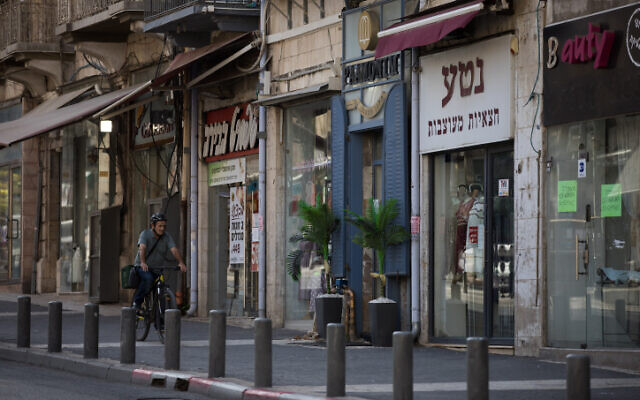 People walk next to closed shops in downtown Jerusalem on September 30, 2020 (Nati Shohat/Flash90)

Netanyahu reportedly replied shortly, “We will open the street shops in a week. Not before.”

“This is a huge mistake,” Katz was said to have retorted.

Finance Ministry chief economist Shira Greenberg has estimated the cost of the continued restrictions on the economy at NIS 2.3 billion ($673 million) a week.

Most of the damage to the economy, she said, stems from the restrictions still in place on commerce and trade. This alone costs the economy an estimated NIS 1.4 billion a week, she said.

Israel began a month-long lockdown on September 18 that succeeded in bringing down surging infection rates but that also paralyzed much of the economy and public life, as well as shuttering the entire education system. Earlier this week the cabinet decided to reopen schools for grades 1-4.

Before the late-night meeting, Netanyahu again rebuffed persistent criticism of his handling of the crisis, and defended the government’s decision to apply the lockdown, saying the measure had saved lives.

In a televised statement he said that without the closure there would have been many more deaths.

“We saved many lives,” Netanyahu said and pointed to countries in Europe where, he said, second waves of infections had prompted governments to also order lockdowns.

“A lockdown is not an easy thing,” Netanyahu said. “Lockdown is very difficult. But when you have no choice, you have to act.” 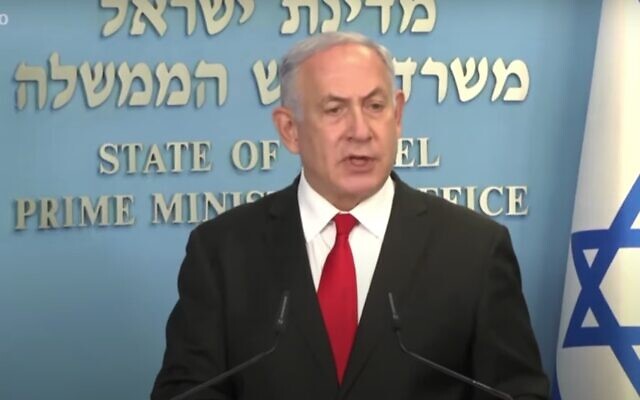 He also attacked the media for citing medical experts who criticize Israel’s policies. “In contrast to what you hear all the time in the media, many admire what the country has done,” he claimed.

Moving forward, he said, obtaining a vaccine “is the key to getting rid of this disease.” Netanyahu warned that no matter what, the coronavirus will remain “here” until a vaccine is developed and maybe even after.

MK Naftali Bennett, who leads the right-wing opposition Yamina party and has emerged as a potential challenger for the premiership, rejected Netanyahu’s comments, saying, “Anyone who treats the second lockdown as a success story will also celebrate the success of the third lockdown.”

In a brief statement, Bennett criticized the government’s performance on the coronavirus, asserting that it had failed parents and business owners with its stringent regulations. “The government is concerned solely with politics instead of managing the crisis,” he charged.