Prime Minister Benjamin Netanyahu announced Thursday that next week he will propose increasing fines for educational institutions operating in violation of virus lockdown measures, after the reopening of some ultra-Orthodox schools and yeshivas in defiance of the regulations.

Though schools nationwide have been officially shut due to virus restrictions, hundreds of ultra-Orthodox elementary and high-school yeshivas — including in high infection areas — have opened in defiance of the law at the order of a senior rabbi, with many ultra-Orthodox officials justifying the move and police only sporadically enforcing the restrictions.

Preschools and daycares were allowed to reopen on Sunday.

The size of fines for rule-breakers has been an ongoing debate, and Netanyahu did not provide specifics on his upcoming proposal. Coronavirus czar Ronni Gamzu has pushed for fines as high as NIS 50,000 ($14,800), but top police officials on Tuesday reportedly said it was unreasonable to expect officers to hand out such steep fines, as it would be emotionally difficult for them to do.

Channel 12 reported that in light of police opposition, Health Minister Yuli Edelstein proposed lowering fines to NIS 10,000 ($3,000) for those hosting gatherings, including at weddings and schools. Repeat offenders, though, would see rates rise to NIS 50,000.

In a video posted on social media, the premier thanked Israelis for adhering to the rules and showing solidarity to cut infection rates, but added that “not everyone is cooperating.”

“That is why next week at the cabinet, I will introduce more steps against those who violate the directives, including heavy fines for education institutions that open without an approval,” he said.

“This isn’t directed against someone, it is meant against something: against the virus and against the disease. I expect cooperation from everyone, without exception,” he said, without calling out ultra-Orthodox communities by name.

Netanyahu’s warning was given as health and education officials were meeting to discuss the reopening of elementary schools, which have been shuttered for over a month amid the second wave of the pandemic.

Speaking to the Ynet news site, Edelstein said he had no problem with third and fourth grade classes returning on November 1, provided that the virus outbreak continues to abate.

He indicated that reopening first and second grades will be more complicated, adding that the Education Ministry will have to present a plan that would ensure the safety of students.

Ynet reported that education officials are prepared to re-open grades one and two in smaller group “capsules,” but the plan will require a budget of an additional NIS 5.3 billion ($1.5 billion), five weeks to prepare and the recruitment of 13,000 teachers.

A similar capsule plan is ready for grades three and four and a budget for the program already exists, the report said, adding that the Health Ministry initially said capsules would not be necessary for first and second grades. The ministry’s about-face left the Education Ministry unprepared. 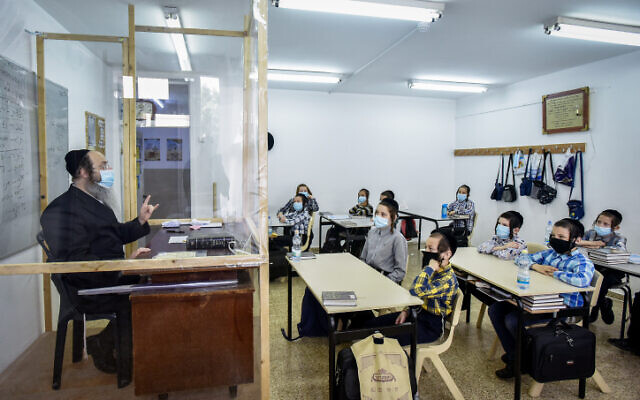 Ultra-Orthodox Jewish kids from the Kretchnif Hasidic dynasty wearing face masks as they listen to their teacher at a school in the city of Rehovot, on September 10, 2020. (Yossi Zeliger/Flash90)

Discussions on reopening schools have intensified as COVID-19 case numbers have continued to drop.

Health Ministry figures from Thursday night showed just 650 new cases since the start of the day. Wednesday’s total was 1,099.

While active cases were at 19,344 on Thursday morning, that number dropped significantly to 17,590 by the night.

The death toll rose climbed by seven Thursday to a total of 2,319.

The rate of positive tests stood at 2.7 percent on Thursday evening, the same as Wednesday, which was the lowest rate since the start of the second wave outbreak. In September, the positive test rate reached as high as 15%. Testing has increased in recent days, hitting 41,072 on Wednesday. 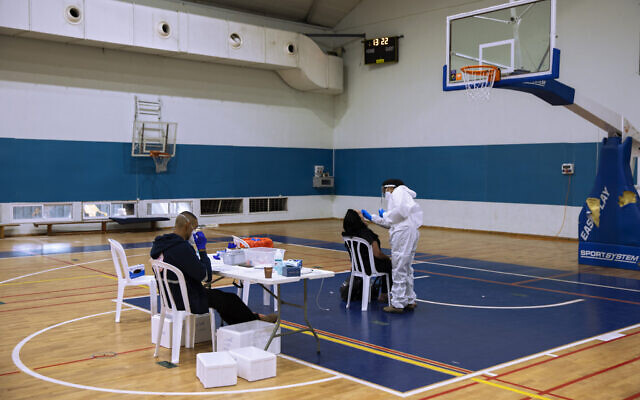 A woman is tested for the coronavirus by a healthcare worker at a COVID-19 testing center, set up at a basketball court, in Ramat Gan, Israel on October 20, 2020. (AP/Oded Balilty)

A military task force said Wednesday that while Israel was continuing to gain control over the outbreak, the morbidity rate remained very high in absolute numbers.

On Sunday, the lockdown began to be eased, with preschools and kindergartens allowed to open. A one-kilometer limit on travel for non-essential needs was also lifted and restaurants were allowed to offer takeout rather than just delivery.

The so-called coronavirus cabinet met Wednesday to discuss allowing shops and more schools to reopen, but pushed off a decision until next week. The full cabinet is set to convene on Sunday morning and reach a final decision on Monday.

During Wednesday’s meeting, Netanyahu called for the Health Ministry’s nine-stage plan for lifting the lockdown to be shrunk to five phases, but health officials expressed concerns about shortening the reopening.

Following the initial coronavirus lockdown in the spring, health officials abandoned their staged plan amid pressure from ministers and opened nearly all schools and businesses at once in early May. That move has been blamed for playing a part in runaway infection rates over the summer that led to the second national lockdown.