To mark Israel’s Independence Day on Thursday, The Times of Israel’s weekly podcast, Times Will Tell, is concentrating on a new trend of anti-Zionism among young Diaspora Jews, and we’re speaking with author and educator Ben M. Freeman whose new book, “Jewish Pride: Rebuilding a People” explores how progressive society has turned Zionism into a form of racism.

But all is not lost: In his book, Freeman also offers ways in which Jews can remain liberally minded and reclaim Israel and their Jewish pride for themselves.

Glasgow-born Freeman, 34, is an educator based in Hong Kong who was inspired to found a “Jewish Pride movement” by his personal experiences in coming out of the closet and claiming for himself LGBTQ+ pride.

In addition to personal anecdotes and self-help encouragement, the book is an informative dive into the history of anti-Semitism. Spoiler: it began well before the advent of Christianity.

Ben M. Freeman, author of ‘Jewish Pride: Rebuilding a People,’ in his guise of educator. (courtesy)

“One of the main objectives of the book is for people to go on that journey to define themselves as proud Jews, but through an authentic understanding of Jewish history, values and tradition… So those who identify today as proud Jews but are anti-Zionist, I would argue they don’t understand authentically, fully, our history, values and traditions. I think they understand a warped version of them,” says Freeman.

He discusses how Jews in many eras, including our own, have internalized this pervasive systemic anti-Semitism, to the detriment of themselves and the Jewish people as a whole as entire communities assimilate based on the myths and biases of anti-Jewish racism.

“In Harry Potter book 3, we meet a magical creature called a bogart who hides in a cupboard and no one knows what it looks like. And the bogart looks different to each person, so it really takes the shape of whatever fears most who is looking at it. So for you it might be snakes, for me it might be spiders, totally different,” says Freeman. 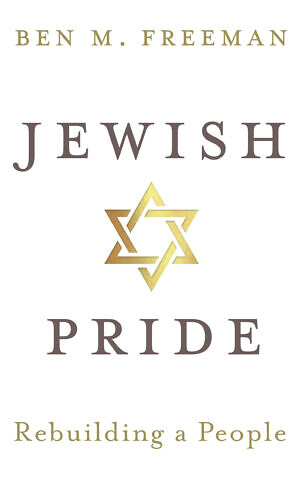 “And that is kind of like the purpose that we [Jews] serve to the non-Jewish world. We’re capitalists, we’re communists, we’re white to the left and we’re also — it’s most important to understand — not white to the right. So we represent all things to all people.”

Likewise, we speak about the racial labeling of Jews and the concept of “light-skinned Jews who pass as White” versus “White Jews.” It’s not as clear-cut as it sounds.

Freeman discusses his own experiences in being a proud Jew and a proud gay man, and how each of the two worlds accepts or rejects the sometimes competing “hyphenated” identities.

“You can have these hyphenated identities: You can be a gay-Jew, a Black-Jew, a trans-Jew, an Asian-Jew, and still be a proud Jew,” he says.

While the book and its author are decidedly pro-Israel, neither are blind to Israel’s problems.

“Israel is not a perfect place… Israel is a real country, a real sovereign state that has problems… Why? Because every country has problems. And there is a tendency to assign those problems or responsibility for those problems to Israel’s Jewishness. That’s where the real problem lies,” he says.

Finally, he gives encouragement for seeding the Jewish Pride movement throughout the Diaspora and spotlights a rainbow collection of seven young activists who have taken up the gauntlet.

The Times of Israel podcasts are available for download on iTunes, TuneIn, Pocket Casts, Stitcher, PlayerFM or wherever you get your podcasts.

Check out this previous Times Will Tell podcast episode: