Concerned about loss of income from shoppers and staff no longer traveling to the mall, dozens of local commuter minibus operators decided to take matters into their own hands and crack down on looters, undeterred by security forces.

They trudged through the debris littering Chris Hani mall, near the southeastern Johannesburg township of Vosloorus, dragging suspected looters outside for a violent beating.

Screams and gunshots filled the air as the group clamped down on their victims with sticks, clubs and whips.

One man who tried to escape was hit over the head with a glass bottle and dragged back, blood streaming down his neck.

Police and soldiers stood out of sight, near the main entrance to a large car park, where they would later take in captives brought over with their hands tied.

A member of the South African Police Services (SAPS) aim at looters following sporadic looting and vandalism outside the Lotsoho Mall in Katlehong township, East of Johannesburg, on July 12, 2021. (Phill Magakoe / AFP)

“The malls are being looted, people are not working… so now we are stuck,” said taxi official Abel, who did not wish to give his full name.

Township residents had meanwhile gathered in a nearby cemetery around the body of a teenage boy, allegedly shot by the same group earlier in the day.

Their involvement has raised concern within the government, which has warned against mob justice compounding some of the worst unrest South Africa has seen in years.

“If we have everybody taking up arms we stand a risk of having unruly elements also hijacking the noble efforts of the community,” acting presidency minister Khumbudzo Ntshavheni told a news briefing on Wednesday, urging citizens to work with law enforcement agencies.

Looting swiftly followed protests over the jailing of South Africa’s graft-accused former president Jacob Zuma, who is viewed by many as a defender of the poor. 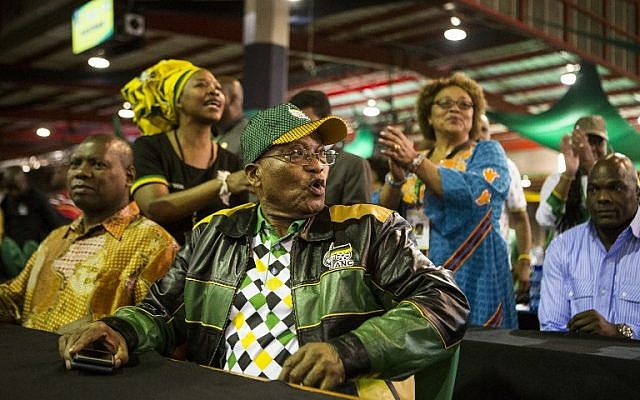 Unrest has raged for almost a week, with impacts on supply chains and transport links that could lead to fuel and food shortages.

At least 72 people have died and more than 1,200 have been arrested, according to official figures.

While mobs caused the initial damage, many of the looters are now township dwellers struggling to feed their families — hardships made worse by the pandemic.

As police cars and forensic teams drove away, some onlookers tentatively inched back towards the mall.

Taxi owners picked up their weapons and went back inside for another round.