During a briefing, Shabtai said that every time police appear to be getting an area under control, Ben Gvir, the Kahanist member of the Religious Zionism party, shows up to fan the flames, Channel 12 and Channel 13 news both reported.

“The person who is responsible for this intifada is Itamar Ben Gvir. It started with the Lehava protest at Damascus Gate,” Shabtai said, referring to far-right demonstrations around Jerusalem’s Old City. “It continued with provocations in Sheikh Jarrah, and now he is moving around with Lehava activists.”

Lehava opposes intermarriage and assimilation of Jews and non-Jews, as well as LGBT rights, and tries to stifle any public activity by non-Jews in Israel, including coexistence events. Lawmakers across the political spectrum have tried to designate it as a terrorist group.

Ben Gvir ceremoniously moved his office earlier this month to the East Jerusalem neighborhood of Sheikh Jarrah, where there has been international outcry due to Israeli plans to evict Palestinian families and hand over the homes to Jews who had proven their pre-1948 ownership.

“Yesterday police managed to calm things in Acre, when the activists showed up in a bus and caused an uproar. The police don’t have the tools to deal with it,” the police chief reportedly said during the meeting.

Ben Gvir responded to the reports by saying that Shabtai should be fired, and accused the police of failing to use sufficient force to subdue the Arab riots.

According to Channel 13, Netanyahu and Public Security Minister Amir Ohana were present in the briefing but made no comment on Shabtai’s remark.

Fresh violence erupted Thursday evening in several Jewish-Arab cities, a night after some of the worst internal unrest in years. 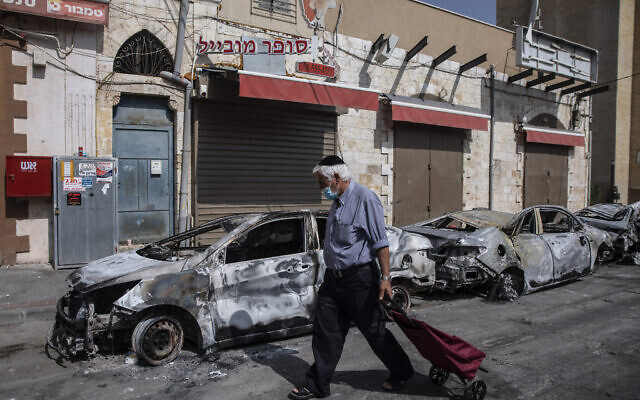 A man passes by cars torched after a night of violence between Israeli Arab protesters and Israeli police in the mixed Arab-Jewish town of Lod, central Israel, Tuesday, May 11, 2021. (AP Photo/Heidi Levine)

In Lod, a central city with Jewish and Arab populations that has become an epicenter of the ethnic violence gripping the country, a Jewish paramedic was lightly wounded after being shot. Reports later said a second Jewish man was shot in the city, after an overnight curfew took effect at 8 p.m. for the second night in a row.

Violence between the Jewish and Arab communities spiraled from confrontations in Jerusalem surrounding the month-long Muslim month of Ramadan and clashes on the Temple Mount, and came to a head as Israel engaged in an escalating clash with terrorist groups in the Gaza Strip.