In his first comments on his possible culpability for the stampede at Mt. Meron Thursday night that left 45 people dead, Public Security Minister Amir Ohana said Saturday he bears overall responsibility, “but responsibility does not mean blame.”

Facing criticism for staying largely silent since the disaster, Ohana, who oversees police, wrote in a Facebook post that he planned to face the public once the dead were buried.

He acknowledged that he bore responsibility, in the sense that he bears responsibility for “any car accident” or “anyone who is attacked with police not there to save him.

“I am responsible, but responsibility does not mean blame,” he said.

“The disaster that happened this year could have happened any other year,” Ohana said, noting that in fact the number of revelers at the holy site was far lower this year than in previous years. He said the scope of the tragedy went “far beyond the police.”

Ohana also gave full backing to the police, saying that “the whole chain of command did its job” ahead of and during the incident, including the police chief and district commander.

The minister added that he had visited the wounded over the weekend and spoken to relatives of victims, and described the pain of hearing their stories.

Meanwhile Police Commissioner Kobi Shabtai issued his first official response to the disaster Saturday evening, expressing his “deep sorrow” to the families of the dead and wishing a speedy recovery to the injured.

“I will not rest until the circumstances that led to this disaster are made clear. The Israel Police under my command will fully cooperate with any inquiry, with full transparency,” he said. He also expressed his “full appreciation to the commanders and all the forces that worked tirelessly during the incident and did everything they could to save lives.”

According to the Haaretz daily, Shabtai and Northern District Commander Shimon Lavi have told associates they don’t intend to resign over the deadly stampede.

Lavi said on Friday that he bears “overall responsibility” for the disaster as the local police commander. However, an unnamed senior police official told the newspaper that “there is a big difference between taking responsibility and blame.”

According to Hebrew media reports over the weekend, Shabtai has told Lavi he has his full support.

On Saturday the Ynet news site reported a groundswell of support for Lavi from police officers across the country, with many officers changing their Facebook profile photos to pictures of the northern district commander with the words “we’re all Shimon Lavi” written on them. Current and retired officers were angered over what they saw as attempts to have Lavi take the fall, according to the report.

The disaster which began at 1 a.m. on Friday morning, took place when huge crowds of ultra-Orthodox pilgrims were making their way along a narrow walkway with a slippery metal flooring that ended in flights of stairs. People began to slip and fall, others fell upon them, and a calamitous stampede ensued.

It later came to light that the state comptroller had warned on at least two occasions that the site at the Mount Meron compound was dangerously ill-equipped for the hundreds of thousands who regularly attend Lag B’Omer celebrations there, while an internal police report in 2016 said that the chaos in the site’s management could lead to disaster.

The Health Ministry had reached an agreement with other ministries and agencies to limit this year’s event to 9,000 people, but the framework was never implemented.

According to the Calcalist website Saturday, an outline plan for the management of the site, which was intended to enable the safe hosting of visitors, was approved in 2018, but was never advanced due to delays over the incorporation of a nearby nature reserve into the jurisdiction of the site. 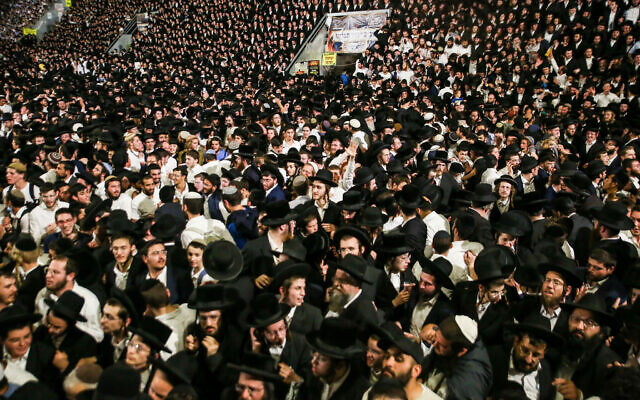 Since the disaster, several former police chiefs have characterized Meron as a kind of extraterritorial facility where ultra-Orthodox organizers have ultimate control, although the National Center for the Protection of Holy Places, part of the Ministry of Religious Affairs apparently has overall safety responsibility. “The police are not in charge of safety” at Meron, Shlomo Aharonishki, a former police commissioner, told Channel 12 news on Saturday night.

He said there had been concerns for decades about the inadequate infrastructure at the facility, including at the huge tiered outdoor stands where vast numbers of participants gather, and warned: “The next disaster [at Meron] is already on its way.”

Liora Shimona, a senior official at the State Comptroller’s Office, was asked in a Friday Channel 13 interview, “Who is in charge of the site?” She said her office, in its reports, had raised to no avail the acute concern that “no single state authority is responsible for the place.”