Hanukkah came early this year: US Secretary of State Mike Pompeo came to town Wednesday evening and brought with him a huge bag full of gifts for the government of Prime Minister Benjamin Netanyahu.

Pompeo, a devout evangelical, clearly is one of the most devoted supporters of Israel in recent memory, and the pro-Israel community will continue to cherish him for a long time. But the many goodwill gestures he made Thursday are unlikely to have a lasting real-world impact.

Some pundits are speculating that he went out of his way for Israel in order to prepare for a possible presidential run in 2024. Donald Trump and Nikki Haley — two other possible candidates — are both superstars in the pro-Israel community, so Pompeo would need to work hard to outshine them in terms of support for the Jewish state.

And in just one short day, Pompeo proved wrong those who believed that the current US administration had already given the Jewish state everything it could ever wish for.

Under Trump, the US moved its embassy to Jerusalem, quit the Iran nuclear deal, applied sanctions on the International Criminal Court, recognized Israeli sovereignty over the Golan Heights, declared that settlements are not illegal, endorsed, in principle, an Israeli annexation of parts of the West Bank and brokered normalization agreements with three Arab states.

With the exception of the Jerusalem embassy, Pompeo was deeply involved in all of these dramatic moves. And on Thursday, he showed that he wasn’t done yet.

It started at around 10:30 a.m., when he announced during a meeting with Netanyahu that the State Department would henceforth consider the anti-Israel boycott movement anti-Semitic and would immediately start cracking down on its activities, including by withdrawing government funding for groups affiliated with BDS.

Prime Minister Benjamin Netanyahu and US Secretary of State Mike Pompeo deliver statements to the press at the Prime Minister’s Office in Jerusalem on November 19, 2020 (Amos Ben Gershom/GPO)

Netanyahu lauded the move as “simply wonderful,” but it’s unclear how it will actually change on the ground. BDS is not very strong in the US, to say the least, and currently doesn’t receive any taxpayer money the administration could cut. Much like Antifa, the leftist movement Trump threatened to blacklist, BDS is not a centralized organization that can be banned, but rather a global phenomenon whose supporters will continue to be active regardless of government designations.

A few hours later, Pompeo made history by becoming the first US top diplomat to visit a West Bank settlement. The secretary and his wife had lunch at Psagot Winery, which is known for its (so far not very successful) crusade against efforts, by the European Union and others, to label West Bank goods as such. It also famously named one of its wines after Pompeo in honor of his “doctrine” that settlements are not necessarily illegal under international law. 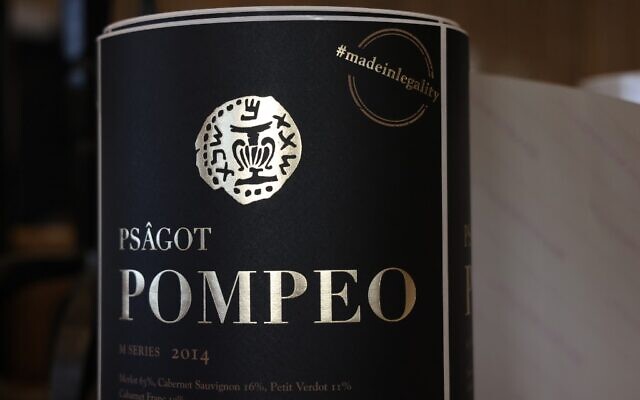 Wine labels named after US Secretary of State Mike Pompeo await to be put on a bottle at Israeli winemaker Yaakov Berg’s Psagot Winery, in the industrial park of Sha’ar Binyamin near the Psagot settlement in the West Bank, on November 18, 2020 (Emmanuel Dunand/AFP)

The trip was billed as “private,” and the State Department did not issue a readout, though the secretary posted photos from Psagot on his official Twitter account.

Pompeo’s unprecedented visit aroused many emotions: Pro-settlement advocates celebrated another victory as officials in Ramallah and pro-Palestinian activists across the world accused him of endorsing land theft.

“It’s a blessing to be here in Judea and Samaria,” he wrote in the winery’s guestbook, using the West Bank’s biblical names. “May I not be the last secretary of state to visit this beautiful land,” he added, presumably mindful that future administrations are likely to continue steering clear of settlements.

Enjoyed lunch at the scenic Psagot Winery today. Unfortunately, Psagot and other businesses have been targeted by pernicious EU labeling efforts that facilitate the boycott of Israeli companies. The U.S. stands with Israel and will not tolerate any form of delegitimization. pic.twitter.com/N4oCD5IqRB

During his visit to Psagot, which is near Ramallah, he announced another seemingly dramatic US policy reversal, saying that all settlement goods imported to the US shall be marked as “Product of Israel” or “Made in Israel.”

“We will continue to oppose those countries and international institutions which delegitimize or penalize Israel and Israeli producers in the West Bank through malicious measures that fail to recognize the reality on the ground,” he said in a statement reminiscent of Israeli officials’ vociferous denunciations of the EU’s labeling policy for settlement products.

His unprecedented visit at Psagot and the labeling policy announcement may have great symbolic value, but are likely to have little concrete impact. His decision will not change Europeans’ minds, and the US is not currently enforcing a special labeling regime for products from settlements anyway. 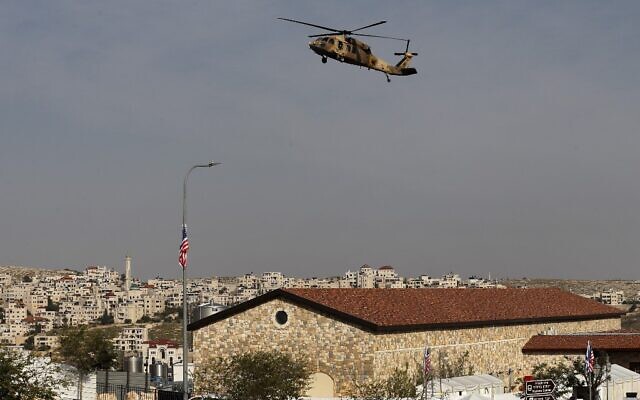 An Israeli airforce Blackhawk helicopter carrying US Secretary of State Mike Pompeo hovers over Psagot Winery, in the settlers industrial park of Sha’ar Binyamin near the Israeli Psagot settlement, in the West Bank north of Jerusalem, on November 19, 2020. (Ahmad GHARABLI / AFP)

The lasting value of the so-called “Pompeo Doctrine” about settlements’ legality may equally be questioned. The international community’s opposition to Israel’s permanent presence in the West Bank remains unchanged, as underlined this week by the deluge of international condemnations of plans to expand the Givat Hamatos neighborhood in East Jerusalem.

It is too early to say if US President-elect Joe Biden will rush to formally return to America’s pre-Trump position on settlements. Preoccupied by a pandemic and a major economic crisis, reinstating the 1978 Hansell Memorandum — which stated that settlements are “inconsistent with international law” — may not immediately top the incoming administration’s agenda.

Still, Biden has for decades been a vocal opponent of settlement expansion and will be sure to make his views on the matter known fairly soon after Inauguration Day. 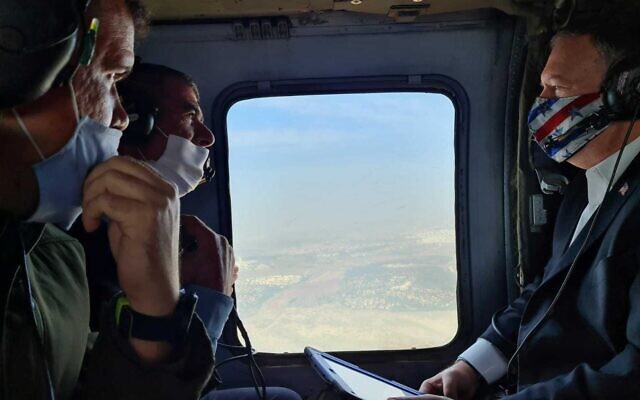 The big finale of Pompeo’s farewell tour Thursday was a visit to Mount Bental on the Golan Heights — the first visit of a US secretary of state to the strategic high plateau claimed by Syria since Washington recognized Israeli sovereignty over the area last year.

“You can’t stand here and stare out at what’s across the border and deny the central thing that President Trump recognized that previous presidents had refused to do. But this is a part of Israel and a central part of Israel,” he declared.

It was a powerful endorsement of Trump’s March 2019 decision, but, again, one with very little concrete real-life implications. Washington remains the only capital in the world, besides Jerusalem, that recognizes Israel’s claim to the Golan. A quick visit by a lame-duck diplomat will not change that. 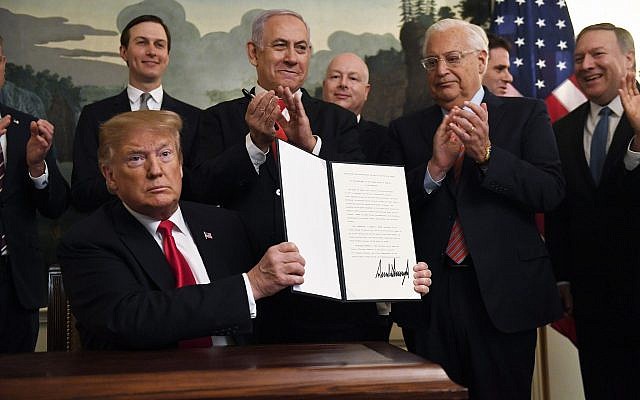 US President Donald Trump holds up a signed proclamation recognizing Israel’s sovereignty over the Golan Heights, as Prime Minister Benjamin Netanyahu looks on in the Diplomatic Reception Room of the White House in Washington, March 25, 2019. (AP Photo/Susan Walsh)

Biden is not expected to rescind his predecessor’s Golan recognition, but he is also not likely to praise it much, either. His former boss, Barack Obama, once laughed Netanyahu out of the Oval Office after he asked the White House to recognize Israeli sovereignty over the Golan, according to a source familiar with the incident.

Pompeo may hence have also been the last secretary of state to visit the West Bank and the Golan, at least for the foreseeable future. But his image as a fearless fighter for Israel, which he skillfully solidified Thursday, would certainly not hurt his chances to get the Republican nomination in the 2024 presidential race, if he chose to enter it.