ABU DHABI, United Arab Emirates (AFP) — What’s Donald Trump’s top diplomat to do when allies have turned the page and are waiting for Joe Biden but the US president refuses to concede?

Secretary of State Mike Pompeo is addressing the complex predicament with a most unusual 10-day trip — a farewell tour in everything but name in which he has dodged the press but forged ahead with Trump’s norm-shattering foreign policy.

The trip opened with 54 hours in Paris in which he appeared for a total of one minute in public, when he laid a wreath in memory of victims of recent jihadist attacks in France.

Pompeo spent the full weekend in Paris accompanied by his wife, Susan, staying at the US ambassador’s residence on what was nonetheless described as private time, with a series of meetings that were not listed on his public schedule.

US Secretary of State Mike Pompeo (3rd-L) arrives with US Ambassador to France Jamie McCourt (2nd-L) to participate in a wreath-laying ceremony in homage to victims of terrorism at Les Invalides in Paris, on November 16, 2020. (Patrick Semansky/Pool/AFP)

When Pompeo resurfaced on Monday, he paid the quick visit to the memorial before meetings with France’s President Emmanuel Macron and Foreign Minister Jean-Yves Le Drian that were closed to the press.

It was Pompeo’s first bilateral visit to America’s oldest ally during his tenure.

France described Pompeo’s trip as a courtesy visit and said it was fully transparent with the team of Biden, whose victory has been hailed in European capitals after four years of tensions with the unilateral-minded Trump.

Diplomacy of a different sort

Pompeo headed from Paris to Istanbul at a time of high tension between France and Turkey, and agreed, in a statement to the French newspaper Le Figaro, that recent actions by Ankara have been “very aggressive.”

Not that he was going to mediate. Pompeo did not meet any officials on his visit to Turkey, with the State Department blaming incompatible schedules.

Instead Pompeo, an evangelical Christian who has put a top priority on religious freedom, met with the leader of the Orthodox world, Patriarch Bartholomew I of Constantinople, as well as the Vatican’s American-born envoy. 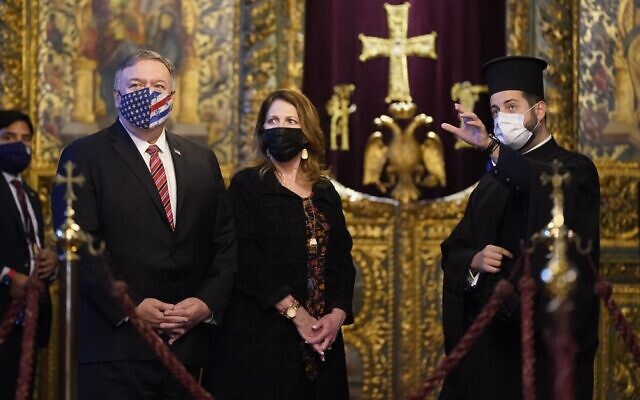 US Secretary of State Mike Pompeo (L) and his wife Susan tour The Patriarchal Church of St. George in Istanbul on November 17, 2020. (Patrick Semansky/Pool/AFP)

Turkey complained about Pompeo’s visit, saying the United States should address racism and other issues at home, and has already congratulated Biden, although Turkish President Recep Tayyip Erdogan is bracing for a tougher relationship with the Democrat who has vowed to empower Turkey’s opposition.

As Trump made baseless allegations of voting fraud in closely fought states including Georgia, Pompeo headed on to another Georgia — the nation in the Caucasus.

Tbilisi, eager to boost relations with the United States, is going through its own internal crisis with the opposition boycotting parliament, saying October 31 elections were rigged.

Pompeo finally spoke on his fourth stop, in Jerusalem, where he pushed the Trump strategy of unstinting support for Israel and maximum pressure on Iran.

For what will likely be his final visit as the top US diplomat, he broke taboos and became the first secretary of state to visit an Israeli settlement in the West Bank — more precisely, the Psagot winery.

That enterprise had already rolled out a Pompeo wine label after he contested the international consensus that Israeli construction in the West Bank is illegal.

Pompeo also made a rare visit by a US official to the Golan Heights, whose annexation by Israel was recognized by Trump. Israel captured the strategic plateau from Syria in the 1967 Six Day War. 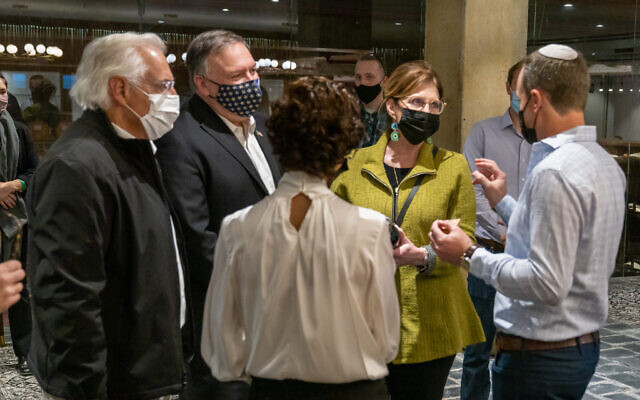 US Ambassador to Israel David Friedman (L) and US Secretary of State Mike Pompeo (2nd L) during a visit to the Psagot Winery in the West Bank, on November 19, 2020. (State Department/Twitter)

Ben Rhodes, a top aide to former president Barack Obama and a major critic of Pompeo, told NBC that the lame-duck secretary of state seemed focused on not just “complicating the Biden presidency but [on] his own political interests.”

He was alluding to wide speculation that Pompeo will seek the White House in 2024, a campaign in which he will likely reach out to fellow evangelical Christians who are staunchly supportive of Israel.

Prime Minister Benjamin Netanyahu hailed the “tremendous friendship” of Pompeo but, mindful of the future, he spoke by phone with Biden on Tuesday, in what the premier’s office called a “warm” conversation.

Pompeo highlighted a signature achievement of Trump by participating in the first-ever visit to Jerusalem by the foreign minister of Bahrain, which officially established diplomatic ties with Israel last month.

He then flew to the United Arab Emirates, which has also normalized relations with the Jewish state. 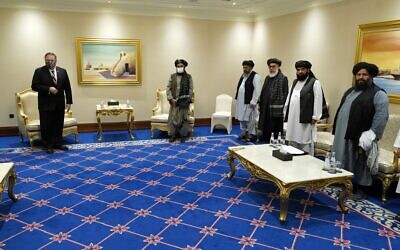 On Saturday he arrived in Qatar to meet negotiators from the Afghan government and the Taliban, and will finish his tour with a stop in Saudi Arabia.

Pompeo is expected to brief the Arab allies on US deliberations on whether to label the Iranian-linked Houthi rebels in war-ravaged Yemen as a terrorist group.

Speculation has also grown of more dramatic action against Iran, with The New York Times reporting that Trump after the election mulled a military strike over its nuclear program, which has grown since Trump withdrew from a denuclearization accord.

Whatever his discussions, they may remain secret for now. Pompeo is looking set to go through the whole trip without taking questions from the traveling press, a silent spell with little precedent in the history of the State Department.